Here is what’s happening, who is responsible and if a deal is possible 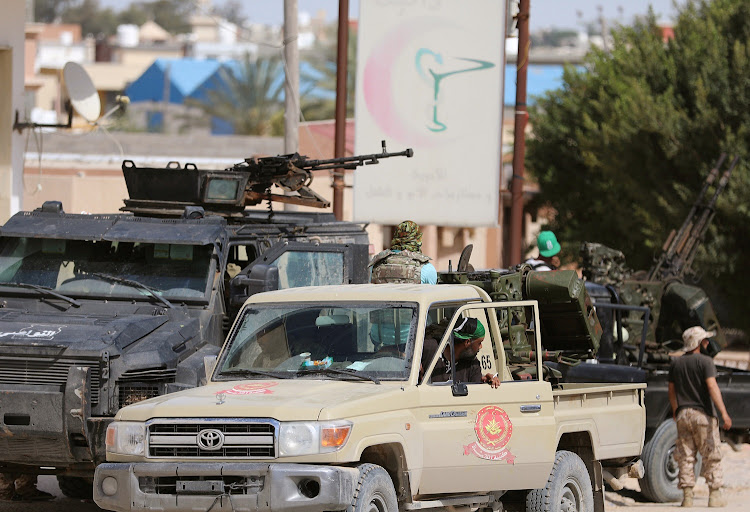 Members of a Libyan militia ride in military vehicles on the outskirts of Tripoli, Libya. Picture: REUTERS/HANI AMARA

Below are details about why it is happening, who is responsible and if a deal is possible.

How did we get here?

Since the 2011 Nato-backed uprising that thrust Libya into chaos, access to its oil wealth has become the biggest prize for all political factions and armed groups.

Both small local groups and major national ones have previously shut down oil production as a tactic to demand a bigger share of state revenue or political changes.

The current political stalemate emerged from the faltering peace process that followed a split in 2014 between warring eastern and western factions that set up rival governments.

In 2020, there was a ceasefire with the collapse of an eastern assault on Tripoli and a move towards reunifying the state in the run-up to a planned election in December 2021.

That effort failed and eastern factions want to replace the unity government, which has refused to step aside, raising the prospect of a return to outright warfare.

Who is blockading Libyan oil facilities?

The shutdowns are ostensibly the work of local protesters demanding the Tripoli-based prime minister Abdulhamid al-Dbeibah quits in favour of Fathi Bashagha, who was appointed to replace him by the eastern-based parliament.

However, analysts and Western officials say the true force behind the blockade is eastern commander Khalifa Haftar, head of the Libyan National Army (LNA) and an ally of the parliament speaker.

Representatives for the LNA have not responded to accusations it backs the shutdown, but the force's own members of a joint committee to uphold the ceasefire said in April that there should be an oil blockade.

What do they want?

The main demand of groups shutting down production is that Dbeibah should quit and Bashagha take over.

However, the current wave of closures began in April after Dbeibah’s government said that National Oil Corporation (NOC) had transferred money to the Central Bank of Libya (CBL) for use by his Finance Ministry.

The eastern factions that seek to replace Dbeibah accuse him of misusing state funds with help from the CBL, an accusation which he and the bank both deny.

Those factions want the CBL to instead finance Bashagha's government, which with Dbeibah still controlling the Tripoli ministry buildings is based in the coastal city of Sirte.

Libyan law and international agreements say oil can only be exported by the NOC, which tries to remain politically independent, with its revenue channelled to the CBL.

Under previous agreements, the Tripoli government has continued to pay state salaries across front lines throughout the conflict, including to fighters on both sides.

However, the LNA has not provided national identity numbers for individuals receiving salaries and western factions accuse it of taking extra money to finance additional operations or corruption. It denies that.

Is there any prospect of a deal?

The political dispute underpinning the blockade shows no sign of resolution and there are fears it could soon lead to a new bout of fighting.

International diplomacy has made little headway and talks to agree on rules for a new election to solve the political dispute have faltered.

A US-led effort to resolve the economic disputes through a mechanism to ensure transparent oversight of revenue collection and spending has not been agreed.

How long could an oil blockade last?

Oil blockades have become a familiar tactic in Libya’s chaotic, violent politics since the 2011 Nato-backed ousting of Muammar Gaddafi.

However, while smaller localised shutdowns have sometimes been resolved within days, larger blockades tied to major political or military struggles have sometimes lasted months.

The last major blockade, when Haftar stopped nearly all production in 2020 for eight months, was only resolved as part of a wider agreement when his assault on Tripoli collapsed.

The IEA said the balance could be upset by tougher sanctions on Russia, a steeper recovery in Chinese demand, supply outages in Libya and limited ...
Markets
3 weeks ago

Since Russia’s invasion of Ukraine, some countries are investing in new oil and gas fields, which will worsen pollution and climate change
World
3 weeks ago
Next Article