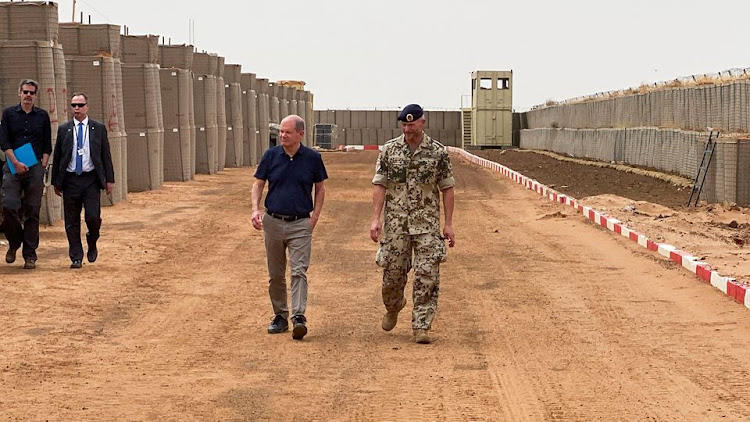 German Chancellor Olaf Scholz inspects the base of the German armed forces in Tillia, Niger, May 23 2022. Picture: ANDREAS RINKE

Niger has taken on a bigger role hosting European special forces since the deterioration of relations between Western powers and the military junta ruling neighbouring Mali.

Scholz visited 180 soldiers from the German Bundeswehr army training Nigerian special forces at a military camp in Tillia about 80km from the Malian border.  He described the Bundeswehr’s training mission in the West African nation as a success.

The mission, which started in 2018, is due to end this year. “Now it will be a matter for us to identify a good follow-up project,” Scholz said later in the day during a press conference with Niger President Mohamed Bazoum.

The Bundeswehr remains part of the UN peacekeeping mission in Mali, and the Bundestag lower house of parliament voted on Friday to increase the maximum number of troops there to 14,000 from 1,100 after France’s withdrawal.

Scholz visited Senegal on Sunday and was due to fly to SA on Monday evening for the final leg of his tour. President Cyril Ramaphosa will host Scholz in Tshwane.

Christian Democrats were projected to take 35.7% of the vote in North Rhine-Westphalia on Sunday
News
3 months ago
Next Article