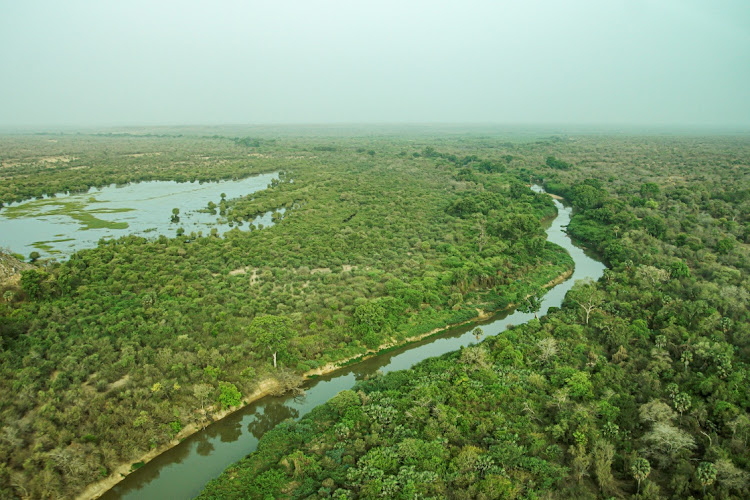 General view of the W National Park in northern Benin in this picture taken on April 21 2019. Picture: /HANDOUT VIA REUTERS/AFRICAN PARKS/JULIAN CHEVILLOT

Dakar — When a dozen suspected Islamist militants from a neighbouring country were spotted riding motorcycles through the W National Park in northern Benin armed with AK-47 assault rifles, park rangers snapped into action.

From an operations room at their base, the park director and two senior ranger officers sent anti-poaching units to pursue the men who eventually fled into Nigeria, according to a confidential incident report reviewed by Reuters.

They also directed Benin's army and police where to position their forces and deployed an aeroplane and helicopter belonging to the park as part of a broader operation to surveil and “neutralise” the target, the undated park report said.

It was prepared by the anti-poaching force to assess the response and make recommendations for improving future collaboration among rangers, army and police, including creating a “rapid intervention/commando unit capable of responding to multiple threats and especially those linked to terrorism.”

The previously unreported account of the 36-hour chase in June 2020 offers a rare glimpse into how conservation group African Parks has gone beyond protecting flora and fauna and engaged in pursuing Islamist insurgents in West Africa.

The blurring of lines between conflict and conservation has raised concern among some experts, who say it could encourage governments to lean on rangers to support their depleted armies and undermine security by making rangers a target for jihadists.

“This is not the rangers’ fight,” said Sergio Lopez, the president of Wildlife Angel, a French non-profit that trained park rangers in Burkina Faso and Niger until 2019. “The fight against terrorism is special forces.”

Non-profit African Parks is based in SA and manages W and the adjacent Pendjari National Park in Benin.

It is in talks to extend operations to parks in Burkina Faso and Niger and to support the management of a park in Ivory Coast, officials in these countries say.

All four are on the front lines of the battle to contain a jihadist threat that has steadily grown since 2012, when Al-Qaeda-linked fighters first seized parts of Mali. Thousands have been killed in the insurgency and millions displaced.

Asked about the report, African Parks COO Charles Wells told Reuters the rangers’ actions were consistent with the group’s mandate of “ensuring park integrity and countering all threats to it”.

“This is an extreme situation, where both the national security as well as the last-functioning conservation system at scale in West Africa are at grave risk.”

He added that African Parks’ role sometimes went beyond its main aim of preserving the natural habitat and supporting local communities' needs.

“In a simplistic and ideal world, there might be such a line. In reality this is indeed blurred.”

There have been several attacks in northern Benin since December 2021, including two on February 8 and 10 2022 by suspected Al-Qaeda-linked militants that killed four rangers, their French instructor, two African Parks drivers and one Beninese soldier.

Benin’s government and defence ministry did not respond to requests for comment about using African Parks to counter the militant threat.

Some other conservation groups have been involved in incidents with suspected militants in the region, but African Parks is by far the biggest.

Regional powers have struggled to contain militant violence, and former colonial power France, frustrated by slow progress and facing public hostility to its presence, said it is halving its 5,000-strong counter-terrorism force in the region.

Financed by the EU and private foundations, African Parks does not charge for its services, though Benin and Rwanda’s governments have committed funding to their parks.

The group equips and trains rangers who sometimes find themselves facing off against heavily armed militants, militiamen and poachers.

A EU official said the EU was unaware of the 2020 incident.

Having this presence is like having a buffer between the national force and the terrorist groups.

The official added that Benin forces should lead the response to security threats, but that African Parks was, at the same time, responsible for protecting parks in which it operates “against any kind of threat”.

As African Parks seeks to expand into parklands that form a vast belt of territory used by militants to press south from strongholds in Mali, Burkina Faso and Niger into coastal nations, opinion over its role is divided.

Some regional experts hope it will help counter extremists who are waging an insurgency that leaves vast stretches of West Africa’s Sahel region beyond the control of governments.

Nassirou Bako Arifari, Benin’s foreign minister from 2011-2015, credited the rangers with helping hold the line against encroachment by militants from Burkina Faso and Niger.

“Having this presence is like having a buffer between the national force and the terrorist groups,” he told Reuters.

But some critics said African Parks’ security-centric response to poaching and militancy, including fencing off large segments of the parks, has alienated some locals who depend on economic activities on those lands, potentially making them more susceptible to militant propaganda.

Wells acknowledged that local access to the parks was “a complex issue”, but said African Parks had worked closely with local communities to build a “conservation-led economy”.

He added that strong law enforcement was essential to protect the parks and avoid a situation similar to Burkina Faso, where he said the absence of state actors had allowed Islamist militancy to proliferate.

In 2020, African Parks had an operating budget of $84m spread across 19 parks in 11 countries, and its rangers are trained by ex-military officers from Europe and SA.

The WAP is West Africa’s last major refuge for elephants and lions, but much of it has been overrun by militants in recent years.

Ivory Coast’s government said last month it planned to work with African Parks to manage and secure Comoe National Park, where militants have carried out several attacks since 2020.

Describing the 2020 showdown with the militants in Benin, where African Parks has about 250 rangers, the report said: “Our ultimate objective is to limit [the group] in its movements, locate it, contain it and organise an offensive operation to neutralise it.”

A helicopter and ultralight aircraft belonging to African Parks were deployed carrying army soldiers and a senior rangers official “in the hope of locating the enemy and destroying it ‘on sight’ before it crosses the border”. Ultimately the militants got away.

Wells said the helicopter was used to transport the soldiers to strategic positions, and the phrase “destroying it ‘on sight’” did not appear in his version of the report. Reuters was unable to establish why there might be a discrepancy between the two.

In the aftermath of the incident, Wells said the rangers and army had each created their own quick reaction units, which he said operated with different missions and under different rules of engagement.

The defence ministry did not respond to a request for comment.

Some analysts see African Parks’ potential expansion — like the recent arrival of Russian private security contractors in Mali — as evidence of a new security strategy in countries like Mali, Burkina Faso and Niger to replace the role played by France and its partners.

“It looks very much like these countries are giving up on Western multilateral counter-terrorism assistance in place of something they will have more control over,” said Aneliese Bernard, a former US state department official in Niger.

France's military, which aims to keep some 2,500-3,000 troops in the region after its partial withdrawal, said it had no comment on African Parks. It added it remains committed to the fight against militants despite the drawdown.

The defence ministers of Burkina Faso and Niger and Mali's army spokesperson did not respond to requests for comment on the potential shift.

‘The Brave Ones’ unit offers dangerous work, a chance to protect wildlife and a decent livelihood
World
2 months ago

Ecowas bloc last month told Guinea and Burkina Faso they had until April 25 to explain how and when they would hand back power to civilians or face ...
World
2 months ago
Next Article