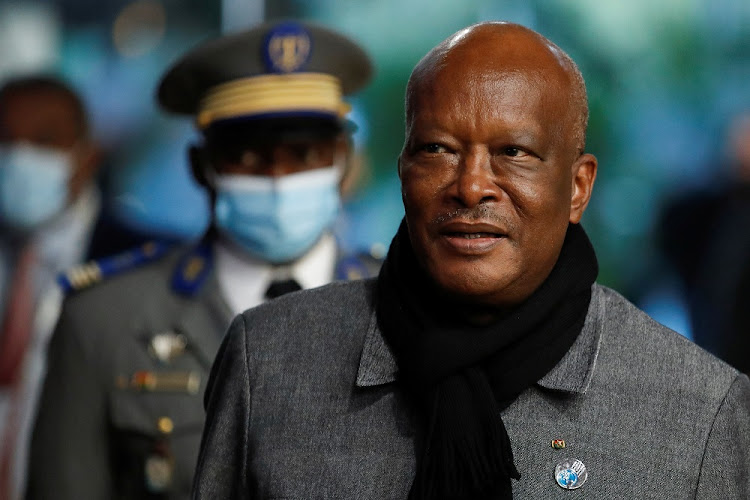 Ouagadougou — The West African bloc Ecowas on Monday condemned what it called an attempted coup in Burkina Faso, saying it held the military responsible for the safety of President Roch Kabore, whose whereabouts is unknown.

A Twitter post from Kabore’s account called on those who had taken up arms — an apparent reference to mutinous soldiers — to lay them down. Reuters could not independently verify if Kabore was the author.

“Our nation is going through difficult moments. We must at this precise moment safeguard our democratic norms,” said the post, which was signed RK. “I invite those who have taken up arms to lay them down in the higher interest of the nation.”

Kabore has not appeared in public since heavy gunfire erupted at military camps on Sunday, when soldiers demanded more support for their fight against Islamist militants. The government then denied that the army had seized power.

Bloomberg reported that soldiers who had detained Kabore asked him to sign a resignation letter, people familiar with the matter said a day after the mutiny.

After heavy gunfire overnight around Kabore’s residence in the capital, Ouagadougou, four security sources and one diplomat told Reuters the president was being detained by mutinous soldiers at an army camp. However, two other security sources, including one close to Kabore, said he had been taken to a secure location for his own protection.

“Ecowas is following with great concern the evolution of the political and security situation in Burkina Faso, characterised since January 23 by an attempted coup d’etat,” the organisation said in a statement. “Ecowas condemns this extremely grave act,” it said, adding it held the army responsible for Kabore’s physical wellbeing.

Army putsches have toppled governments over the past 18 months in Mali and Guinea. The military also took over in Chad last year after then president Idriss Deby died fighting rebels on the battlefield in the country’s north.

Landlocked Burkina Faso, one of the region’s poorest countries despite being a gold producer, has experienced numerous coups since independence from France in 1960. Islamist militants control swathes of the country and have forced residents in some areas to abide by their harsh version of Islamic law, while the military’s struggle to quell the insurgency has drained scarce national resources.

Several armoured vehicles belonging to the presidential fleet could be seen near Kabore’s residence on Monday, riddled with bullets. One was spattered with blood. Three armoured vehicles and soldiers wearing balaclavas were stationed outside the headquarters of the state broadcaster.

Government sources could not immediately be reached. Rumours circulated of an imminent broadcast by a military officer, but none had taken place by 3pm GMT.

The French embassy advised French nationals in Burkina Faso against going out during the day for non-essential reasons, or at all at night, calling the situation “quite confusing”.

Two Air France flights scheduled for Monday night had been cancelled and French schools in the country would remain shut on Monday and Tuesday, it added.

Kabore has faced waves of protests in recent months amid frustration over killing of civilians and soldiers by militants, some of whom have links to Islamic state and Al-Qaeda. Some of the anger was also directed against former colonial ruler France, which has deployed thousands of soldiers in West Africa’s Sahel region to combat the militants.

Protesters came out to support the mutineers on Sunday and ransacked the headquarters of Kabore’s political party. The government declared an overnight curfew until further notice and closed schools for two days.

Splits have emerged in Burkina Faso’s armed forces before. In 2015, an elite army unit arrested the interim president and prime minister of a transitional government that had been installed following the previous year’s uprising that ousted veteran leader Blaise Compaore.

But forces loyal to the government then counterattacked, overturning the coup in less than a week and allowing elections to go ahead later that year.

Burkina Faso president detained by soldiers after day of unrest

President Kabore is being held at a military camp and has been asked to sign a resignation letter, people familiar with the matter say
News
3 months ago