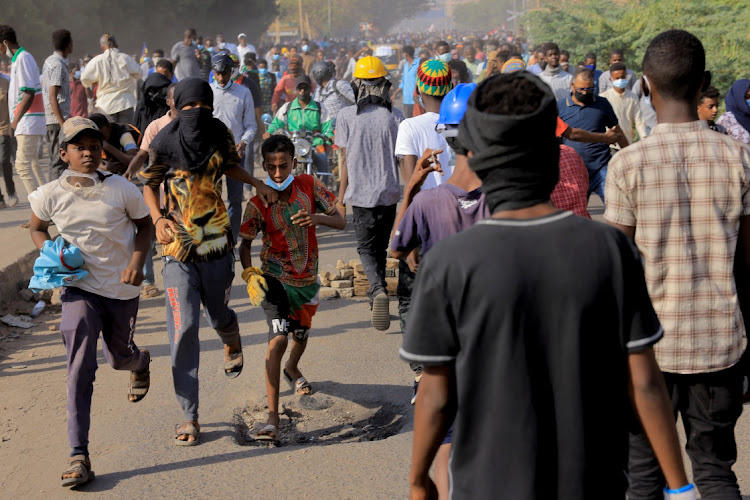 Khartoum  Organisers of anti-military rallies in Sudan's capital Khartoum announced an escalation of protests after security forces used gunfire and teargas on Monday to disperse demonstrations against a coup and medics said seven people had been killed.

Security forces fired volleys of tear gas as they blocked thousands of protesters from advancing on Khartoum's presidential palace, and several injured civilians could be seen bleeding heavily in the street, a Reuters witness said.

They also fired live ammunition and stun grenades, said the Central Committee of Sudanese Doctors, a group of medics aligned with the protest movement, which reported seven deaths.

Medics said  many others were being treated for injuries at Khartoum hospitals.

"The military prepared a massacre for us today, and all we've done is ask for civilian rule and democracy," said Mohamed Babaker, a student.

A police spokesman said a statement would be released later. Government sources put the death toll from Monday at three.

Huge crowds have regularly taken to the streets demanding a return to civilian rule since the military coup on October 25 ended a power-sharing arrangement agreed after strongman Omar al-Bashir fell during a popular uprising in 2019.

Medics say at least 70 people have died in clashes with security forces since the coup.

A security and defence committee formed under the ruling council commended security services on Monday for their "restraint" and protection of civilians, paying tribute to a police officer killed in protests on Thursday.

It said in a statement that it would establish an anti-terrorism force to counter "potential threats", without elaborating.

On Monday, protesters had gathered about 2km from the palace, blocking a main road in the Al Diyum neighbourhood and burning tyres before starting their march.

Civilian political parties announced two days of civil disobedience in protest against Monday’s violence. Resistance committees organising protests in Khartoum and in its twin city of Omdurman across the Nile called on people to blockade local streets.

Last week, the UN began consultations to try to break a deadlock between military leaders and pro-democracy civilian groups and avert the risk of further instability.

After the coup military leaders reinstated Prime Minister Abdalla Hamdok in an attempt to safeguard economic reforms, but he resigned earlier in January

Sudanese forces crack down on thousands of protesters in Khartoum