US secretary of state is in Nigeria for talks on domestic and regional security, as well as development aid 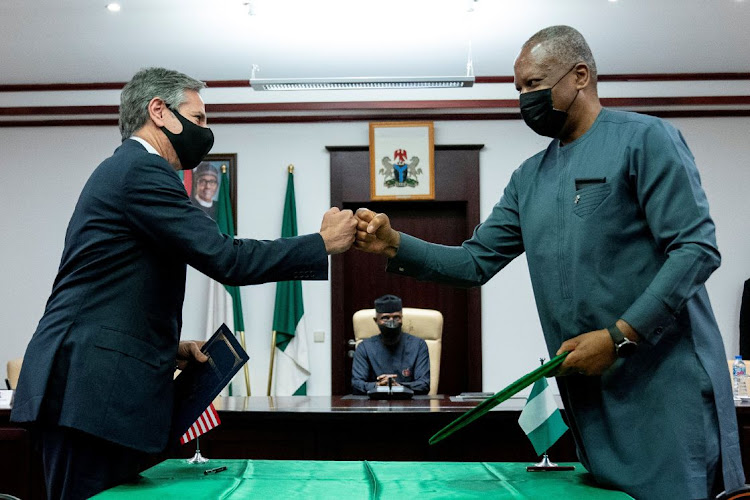 US secretary of state Antony Blinken said on Thursday that he had signed a $2.17bn development assistance programme with Nigerian foreign affairs minister Geoffrey Onyeama.

Washington would also continue to invest in security in Nigeria, Blinken said at a joint news conference with his Nigerian counterpart.

Blinken is visiting Africa’s most populous country to discuss domestic and regional security, including possible US military and intelligence support for Nigeria’s counter-terrorism efforts, according to Nigerian officials.

Nigeria is battling insurgent groups Islamic State West Africa Province  (Iswap) and Boko Haram, among others. The conflict has  spread to neighbouring states including Chad and Cameroon, and has left about 300,000 dead and millions dependent on aid.

He said Washington’s involvement in infrastructure development in Africa was not about China, but was intended to improve the standard of infrastructure without countries becoming burdened by debt.

Onyeama said Nigeria needed investment from China to tackle a severe infrastructure deficit, and said the debt it has taken on was  sustainable. “We saw a great opportunity with the Chinese,” Onyeama said. “They are used to a lot of these huge capital projects and infrastructure projects.”

China is one of the major bilateral lenders to Nigeria and has provided financing for infrastructure development such as roads, rail and gas pipelines. Nigeria’s public debt office says on its website that Chinese debt stood at $3.121bn or 3.94% of the country’s total public debt stock as of March 2020.

Blinken said investment from China in Africa was in principle a good thing, but that countries should not be left with “tremendous debt that they cannot repay”, adding that workers rights, environmental protections and safeguards against corruption should also be in place.

Developed countries in the G7 would invest in Africa as part of the so-called Build Back Better World programme, he said.

He was due to fly to Senegal after visiting Kenya and Nigeria.

Could it be that a policy of even-handedness had gone too far? asks Simon Wolfe
Opinion
4 weeks ago

A study by international development research lab AidData shows the initiative has been hit by alleged corruption scandals or cancellations  in a ...
World
2 months ago
Next Article