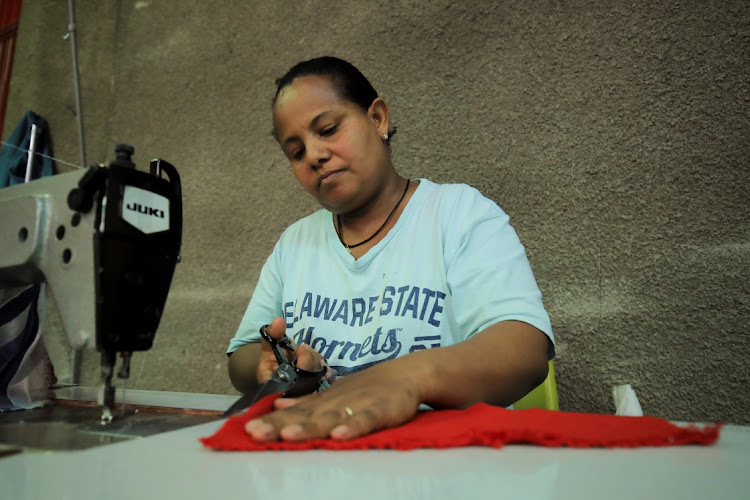 Like thousands of other Ethiopian women, stitching shawls for export to the US pays the textile worker’s rent and her daughter’s school fees.

Now though, Finoteselam’s job is in danger as the US ponders suspending Ethiopia’s duty-free market status, citing abuses and a growing famine in the war-ravaged northern Tigray region.

Suspension of benefits under the African Growth and Opportunity Act (Agoa) would threaten Ethiopia’s aspirations to become a light manufacturing hub and dent hard-won economic gains in a nation once a byword for hunger and poverty.

“We have used Agoa since we started business,” said Finoteselam’s boss Sammy Abdella, who set up the company nearly two decades ago and employs 250 people.

“People ... have worked with us since we have started. We have created a family,” he added.

Though Ethiopia is not a large global supplier, suspension of its US trade status would be yet another problem on the list for global fashion brands such as The Children’s Place, Tommy Hilfiger and Calvin Klein as Covid-19 disrupts manufacturing capacity, ports and supply chains.

Washington has repeatedly expressed concern over widespread reports of sexual violence by Ethiopian and allied Eritrean soldiers in Tigray, where local forces have battled the military and its allies for a year.

The UN says a de facto blockade of aid has forced 400,000 people into famine. On Thursday, it said no food convoys had entered Tigray for the past 10 days. There have been many reports of mass killings of civilians.

Reports said on Thursday an Ethiopian government jet bombed the capital of northern Tigray region, with one doctor reporting 10 deaths. Prime Minister Abiy Ahmed’s federal forces have hit Mekelle from the skies at least eight times in the past two weeks, residents say, in a fight against local Tigrayan forces that has killed thousands and uprooted more than 2-million people.

The government has denied blocking aid and said individual soldiers have been tried for any abuses, without giving details. Eritrea has denied committing abuses.

Washington has already laid the ground for sanctions, with its chief trade representative promising a decision soon on its Agoa status.

The act gives sub-Saharan African nations duty-free access to the US if they meet criteria including removing barriers to US trade and progress towards political pluralism.

“We should not politicise trade issues,” he said.

Over the past decade, Ethiopia has spent billions constructing a dozen industrial parks and related infrastructure. Some factories produce goods for fashion giant PVH, owner of the Calvin Klein, Speedo and Tommy Hilfiger labels.

At Finoteselam’s company, Sammy Ethiopia, about 90% of products are exported to the US, via retailers such as Eileen Fisher and Anthropologie.

Exports to the US account for three-quarters of the firm’s annual turnover of more than $200,000. If Ethiopia is suspended, Sammy said his company will close.

Ethiopia exported about $237m worth of goods duty-free to the US under Agoa in 2020, US commerce department data shows, more than 90% of it textiles and apparel.

Duty-free access is a major draw for companies including Gap and Sweden’s H&M. The full impact a suspension on foreign investors and Ethiopian companies exporting to the US is not yet clear, with layoffs and order cancellations possible.

Mamo warned an Agoa suspension would hurt US companies trying to diversify production from Asia by relocating or expanding to Ethiopia.

Conlumino, a retail research agency and consulting firm, noted, however, that Ethiopia’s textile exports to the US were still minuscule compared with the likes of China, Bangladesh and India.

Though Ethiopia would suffer from a Agoa suspension, retailers will find alternatives despite the havoc from Covid-19, said Neil Saunders, a Conlumino analyst.

“The suspension of Agoa will not have a huge impact on clothing retail,” he said. “However — as this will come at a time when global manufacturing capacity is already reduced and retailers are struggling to keep up with demand — it is an added headache.”

An H&M spokesperson said the company was following developments regarding Agoa carefully, but it was too early to comment. In December, H&M said its long-term manufacturing and sourcing strategy involves Ethiopia and it did not plan to change. But its Ethiopia production is comparatively small.

US-based apparel companies The Children’s Place, Gap and PVH did not respond to requests for comment.

A senior PVH official previously said the 10-year renewal of Agoa in 2015 “was a critical factor in PVH’s decision to invest”, according to a 2017 case study of PVH in Ethiopia published by the World Bank and co-authored by Mamo.

In 2018, PVH said Ethiopia could become a top supplier because it grows cotton, dyes fabrics and sews garments. It established a joint venture to operate a factory in Hawassa city, the company’s first such venture in 30 years.

Raghavendra Pattar is CEO of Nasa Garment, a manufacturer in Hawassa Industrial Park. Nasa exports about 95% of its garments to US companies. It employs 1,200 workers, mostly women, and spent $7m to set up the factory two years ago.

But an Agoa suspension would halt expansion.

“Agoa ... is the reason buyers are coming to Ethiopia and sourcing manufacturing here,” he said. “If the duty benefit is taken away, the buyers will go to another country.”