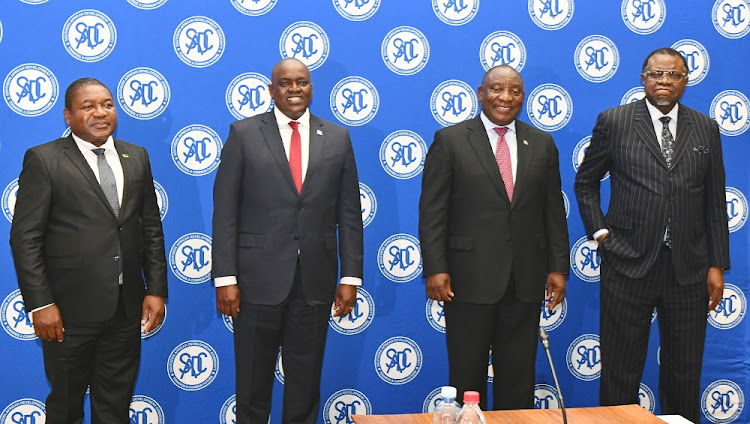 President Cyril Ramaphosa said on Tuesday that while the political and security situation in the Southern African Development Community (Sadc) region was relatively peaceful and stable, the region had its share of challenges.

“As we deal with the security situation in support of our sister country, we are confident that, like in any other Sadc undertakings, security and stability in Mozambique will be restored,” Ramaphosa said in opening remarks to an extraordinary Sadc trioka meeting in Pretoria.

The president told the meeting, which included Mozambique, the commitment and solidarity of Sadc members was shown by the generous support of member states that contributed personnel to the rapid force sent to Mozambique.

As chair of Sadc’s organ on politics, defence and security co-operation, he said the summit had been convened to review the operations of its mission in Mozambique.

Ramaphosa said that the Sadc extraordinary summit in Maputo on June 23 had agree to the deployment of a standby force with rapid deployment capability to Mozambique from July 15. Its mandate was to combat terrorism and violent extremists in the country’s Cabo Delgado province.

Ramaphosa told parliament in July the deployment would be for an initial three months and would cost R984m.

“This deployment was approved for an initial period of three months subject to extension for further periods, depending on the evolution of the operational situation on the ground in Mozambique,” said Ramaphosa.

He said the mission was to be preceded by the deployment of a regional co-ordination mechanism.

Ramaphosa said as the mandate of the Sadc mission is due to expire on October 15, the summit will receive a report and assessment of the regional co-ordination mechanism and recommendations on a way forward.

The summit will receive a report from Mozambique on their own analysis and assessment and provide a report on their contribution to the Sadc mission, with the emphasis on progress but also focusing on whatever challenges may lie ahead. The meeting will also propose ways to keep the mission on track going forward.

“We are determined as a region that we pledge our solidarity and continue giving our support to Mozambique as it goes through this troubled moment in its life. These acts of terrorism and insurgency have disrupted ordinary people’s lives and it has therefore been important for the Sadc to come to the support of Mozambique.”

Ramaphosa said Sadc would offer the same support to any member state facing the same challenges as Mozambique.

“Through acting in the way we are now, with this mission and deployment, we are making it very clear as a region that we will not tolerate any acts of terrorism targeted against our people in whatever country in the region.”

Acting as one, Ramaphosa said, Sadc would collaborate and co-operate to help Mozambique.

Making his first remarks as Sadc executive secretary at the summit, Elias Magosi said: “The Sadc mission in Mozambique was deployed on July 9, starting with the regional co-ordination mechanism in Maputo, and attained full operational capability on August 30. I am glad to report that since its deployment the mission has registered considerable progress with life returning to normal in some parts of the region.”

He said this was all thanks to the work of Sadc forces on the ground. However, regrettably, the mission had lost three soldiers from Botswana and two from Tanzania.

Landmines and IEDs are now being used by insurgents, ‘changing the course of the conflict’
World
8 months ago

Despite the public’s rejection of ‘forever wars’, the US will need to maintain military pressure on radical networks
World
8 months ago

Four months after IS gunmen overran Palma, a town housing TotalEnergies contractors, the insurgents still control swathes of territory and a key port ...
World
10 months ago
Next Article