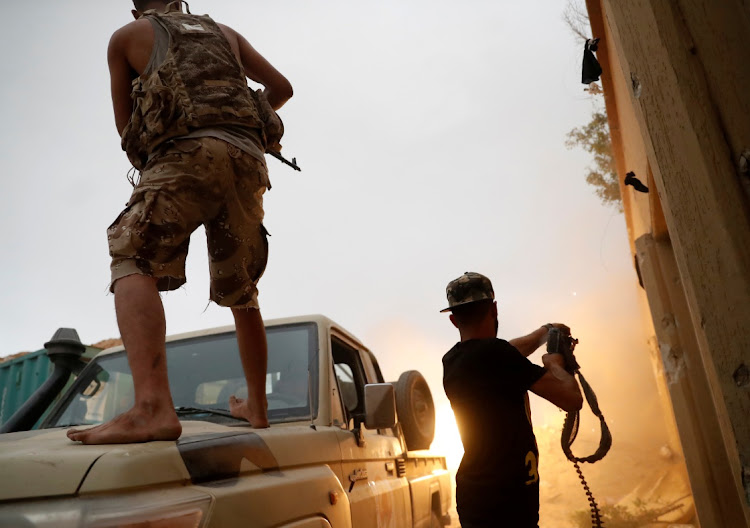 Fighters loyal to Libya’s UN-backed government fire guns during clashes with forces loyal to Khalifa Haftar on the outskirts of Tripoli, Libya May 25 2019. Picture: REUTERS/GORAN TOMASEVIC

Geneva  — Russian mercenaries in Libya killed detainees, among the possible war crimes committed by multiple sides in the conflict, UN human rights investigators said on Monday, adding that they had drawn up a confidential list of suspects.

Libya has been in turmoil for a decade, with the past several years seeing war between forces backing rival governments based in the east and west, supported by regional powers, foreign fighters and mercenaries. Russia, Egypt and the United Arab Emirates backed the eastern forces, while Turkey backed the government in the west.

The report specifically accused mercenaries from Wagner, a Russian security firm, of having shot prisoners in September 2019. “There are thus reasonable grounds to believe that Wagner personnel may have committed the war crime of murder,” it said.

It also said Wagner personnel had left behind a computer tablet with a map showing 35 locations where landmines were planted near civilian buildings, in areas abandoned by retreating eastern forces. The mines, mostly made in Russia, had killed and maimed civilians returning to their homes since June 2020, it said.

Reuters was not immediately able to reach Wagner, and the secretive firm has not responded to questions about its activities in the past. When asked in 2020 about allegations of Russian mercenary activity in Libya, President Vladimir Putin said that if any Russians were fighting there they did not represent the Russian state.

Major combat in Libya has been paused after an advance on the capital by the eastern forces was pushed back in 2020, and both sides have accepted a ceasefire and unity interim government. An election is planned for December.

Libya’s foreign minister said on Sunday that some foreign fighters had left the country as the unity government seeks to marshal international help to withdraw the rest.

The three-member panel’s report to the Human Rights Council, delayed by budget constraints, was based on hundreds of documents, satellite imagery, interviews with more than 150 people and investigations in Libya, Tunisia and Italy.

Much of Libya has been dominated since the 2011 Nato-backed uprising against Muammar Gaddafi by myriad armed groups battling for control of territory and economic assets, including the illegal traffic in migrants fleeing conflict and instability.

Torture and other abuses perpetrated on a “daily basis” in Libyan prisons by state authorities and militias against detained migrants may amount to crimes against humanity, the independent experts said.

“It is quite clear that the (EU) pushback policies at sea have led to huge violations of human rights ... of migrants, leading to detention in Libya upon return,” said panel member Chaloka Beyani.

The UN investigators identified the suspected perpetrator of one of the worst abuses — killings carried out by an armed group in the town of Tarhouna with victims buried in mass graves —  as Mohammed al-Kani, a commander they said was himself killed in July during a raid by the eastern-based Libyan National Army (LNA).

Kani’s armed group had been fighting alongside the LNA for years and had found refuge in LNA-held territory after being driven from Tarhouna. Neither the LNA nor police in Benghazi had previously confirmed the killing of Kani. Reuters was not able to contact his representatives.

Having alienated the US, Turkish president receives platitudes over Syria and gas from Putin
Opinion
2 weeks ago

In a blow to UN-backed efforts, 89 of 113 MPs vote to withdraw confidence in Prime Minister Abdulhamid Dbeibah’s unity government
World
1 month ago

Morocco’s long-dominant Islamist party suffered a crushing defeat in parliamentary elections as voters, frustrated over unemployment and corruption ...
World
1 month ago
Next Article