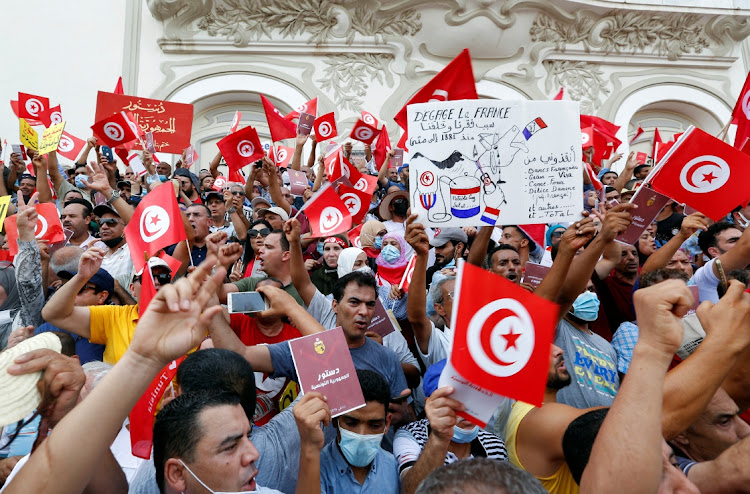 Demonstrators carry flags and banners during a protest against the Tunisian President Kais Saied's seizure of governing powers, in Tunis, Tunisia, on September 26 2021. Picture: REUTERS/ZOUBEIR SOUISSI

But the mother of four is now losing patience with what some Tunisians see as his lack of an economic game plan, as opposition mounts against what his opponents call a coup.

Souissi said her salary of 1,000 dinars a month can no longer keep pace with the high cost of living, with inflation running at 6.2%, and it is difficult to secure a bank loan due to scarce liquidity.

"We expected prices to drop. But look, the price of a kilogram of escalope [a type of boneless meat] rose from 15 dinars to 19 dinars," she said at a market in the Ibn Khaldoun district of the capital.

But Saied is now coming under growing pressure to tackle Tunisia’s economic troubles after the political crisis endangered the democratic gains that Tunisians won in the 2011 revolution that triggered the Arab Spring protests.

Saied’s intervention paused much delayed talks with the IMF for a loan programme that was expected to unlock further economic assistance and avert a crisis in public finances.

"The situation is very critical in the economy and public finance in particular. We have been on the verge of collapse for months," said economics analyst Moez Joudi.

"But the political crisis now and the absence of any programme and a clear economic vision is really accelerating the complete collapse."

He predicted that Saied’s focus on politics could turn Tunisia into another Lebanon, which is in the throes of a financial crisis that the World Bank has called one of the deepest depressions of modern history.

Three-quarters of Lebanon’s population have been propelled into poverty and its local currency has lost 90% of its value in the past two years.

Saied, who sacked the prime minister, froze parliament and empowered himself to rule by decree, has yet to appoint a new government, articulate any comprehensive economic policy or say how he would finance the public deficit and debt repayments.

The president’s office was not available for comment on the state of the economy in the North African country. Neither were economic and financial officials.

Tunisia repaid more than $1bn in debt earlier in 2021 from foreign currency reserves, but must find about $5bn more to finance a projected budget deficit and more loan repayments.

Saied still enjoys wide support from a public grown tired of corruption, and says he has clean hands. But political paralysis is hurting chances of turning around the economy.

A man who would only give his first name, Mohamed, sat at a cafe with two friends complaining that he has been unemployed for four years.

“The economic conditions are a real test for the president. The situation is bad. The president has opened a door of hope for us," he said.

"I hope he does not close it quickly, and he should avoid populism. We want to see the president attract investments and provide us with work."

Both the influential labour union and foreign lenders see little choice but to resume the IMF process. While Tunisia needs about 4-billion dinars a month to pay wages and pay off debts, the state treasury has only 544-million dinars, according to central bank data released on Monday.

Saied has said his actions are needed to address political paralysis, economic stagnation and a poor response to the pandemic. He promised to uphold rights and not be a dictator.

The president has not put any time limit on his seizure of power, but said he would appoint a committee to help draft amendments to the 2014 constitution and establish "a true democracy in which the people are truly sovereign".

Several thousand demonstrators rallied in Tunis on Sunday to protest at Saied’s power grab, calling on him to step down in the biggest show of public anger since his intervention.