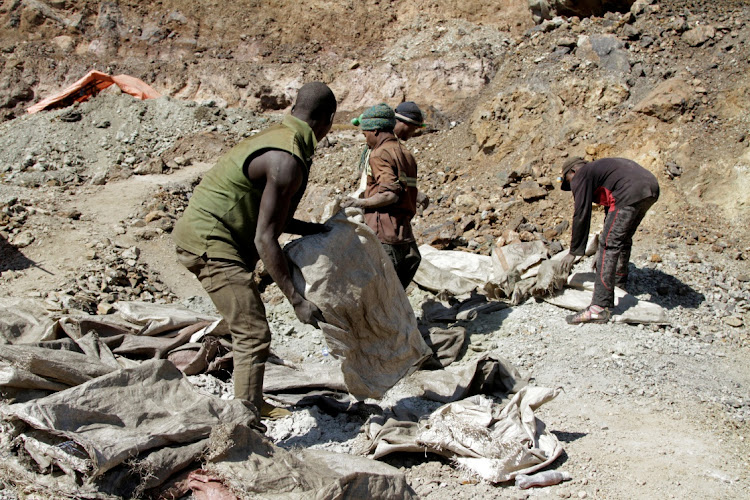 Workers at Tilwizembe, a former industrial copper-cobalt mine outside Kolwezi, the capital city of Lualaba province in the DRC, in 2016. Picture: REUTERS/KENNY KATOMBE

The Democratic Republic of Congo’s (DRC) state cobalt buyer and China’s biggest cobalt refiner are in talks to end a dispute over a mine at the heart of the DRC’s efforts to clean up its supply of the metal and reassure car and battery makers that rely on it.

State-backed Entreprise Generale du Cobalt (EGC) earlier in 2021 earmarked the Kasulo mine in Lualaba province for its first purchases of cobalt as it works to overhaul conditions at informal mining sites, where child labour and deadly accidents are common.

But EGC’s plans to start buying cobalt in September from the mine have been disrupted by China’s Zhejiang Huayou Cobalt.

Its subsidiary, Congo Dongfang International Mining (CDM), is based at Kasulo and the refiner said it has a contract giving it the right to stay until the deposit is exhausted. Reuters could not confirm the contract’s details.

“We are working on resolving the situation created by the continuous presence of CDM on this site, and we are hopeful a solution is in sight,” EGC director-general Jean-Dominique Takis said.

Bryce Lee, head of corporate social responsibility at Zhejiang Huayou Cobalt, said the company is in “friendly negotiations” with EGC over Kasulo.

Geneva-based commodity trader Trafigura is helping to finance the EGC in return for a supply of 45,000 tonnes of hand-mined cobalt, valued at about $2.4bn at current prices.

Trafigura declined to comment on the discussions, which have not previously been reported.

The dispute highlights the DRC’s challenges as it seeks to be a responsible source of the metal used to make electric vehicle batteries, and to secure a greater share of the profits from its mineral wealth.

The country supplies more than 70% of the world’s cobalt but almost 10% of that comes from miners digging by hand at unregulated sites. Deterred by possible human rights abuses in the supply chain, electric car makers including Volkswagen and Tesla are seeking to reduce their use of cobalt.

EGC was given the exclusive right to buy hand-mined cobalt in 2019 but implementing its mandate to ensure the metal is mined ethically requires a lengthy process, including remodelling mines to make them safer.

EGC's responsible cobalt standard, set out in March, bans tunnelling on its sites and says pits must not exceed 10m in depth. That means Kasulo will have to be remodelled before EGC can source from it.

A source with direct knowledge of the matter, who asked not to be named because of the sensitivity of the issue, said it would take about two months from a takeover of the site by EGC takes for cobalt purchases to begin.

Lualaba provincial mines minister Jean-Marie Tshizainga wrote to CDM in April telling it to cede Kasulo to the EGC, saying in the letter seen by Reuters it is “in your interest” to do so.

Lee said that letter “did not align with the formal agreement that is in place”. He also sent Reuters the cover page of a June 2017 agreement between the Lualaba government and CDM, but declined to share the entire document.

Tshizainga did not respond to a request for comment.

Reuters could not determine whether the government decree establishing EGC’s monopoly rights voids CDM’s contract with the provincial mines ministry.

In 2020, CDM’s parent company Huayou Cobalt said it would stop sourcing cobalt from unregulated mining sites in the DRC until the international community decides on a responsible sourcing standard.

Miners, sometimes including children, dig by hand at sites and the conditions can be hazardous. Lee said that since April 2020 no hand-mined cobalt from Kasulo has entered CDM’s treatment units, and instead CDM has facilitated the sale of cobalt from Kasulo to local traders to ensure miners have an income.

At least five die in latest attacks in Burundi

DRC to seek reparations for spill that also allegedly sickened 4,400 locals
World
9 months ago
Next Article