Military junta seized power on Sunday after detaining President Alpha Conde, who had been in power since late 2010 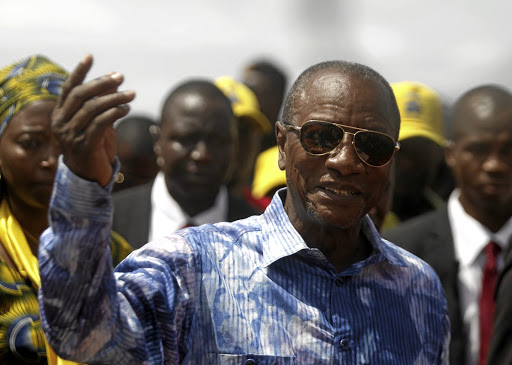 A military junta that seized power in Guinea on Sunday reopened air routes in and out of the country ahead of a planned meeting between its leaders and members of the nation’s ousted cabinet to discuss a transition of power.

“All airlines can resume their activity subject to submitting to the relevant administrative procedure,” coup leader Colonel Mamady Doumbouya said in a statement read out on state-owned Radio Television Guineenne on Monday. The ports have also been reopened, though land borders remain closed.

The meeting with the cabinet was scheduled to begin on Monday morning in Conakry, the capital. Doumbouya has ordered members of a presidential security unit to confine themselves to barracks outside Conakry, the secretaries-general of Guinea’s ministries to take over the role of ministers, and the governors of the regions to be replaced by military commanders.

Special forces led by Doumbouya seized power on Sunday after detaining President Alpha Conde, who had held power since late 2010. The 83-year-old leader has so far resisted pressure to resign, according to two people familiar with the matter who asked not to be identified because they aren’t authorised to speak to the media.

Doumbouya will present himself as the leader of the transition, the people said.

A curfew is in place and there were no signs of unrest in Conakry overnight in response to the military takeover.

Guinea is a key global supplier of bauxite, an ore that’s processed into alumina and then aluminium, which is used in cars and cans. The bulk of the West African nation’s bauxite exports are sent to smelters in China, the biggest producer of the metal. Guinea shipped 82.4-million tonnes of the mineral globally last year, according to government data.

China and Russia on Monday joined the UN and the US in condemning the coup.

“China opposes coup attempts to seize power and calls for the immediate release of President Conde,” Chinese foreign ministry spokesperson Wang Wenbin told reporters in Beijing on Monday. “We hope all parties can be cool headed and exercise restraint, keep in mind the fundamental interests of the nation and people, address the relevant issue through dialogue and consultation and safeguard peace and stability in the country.”

Leaders of two African blocs have also pushed for Conde’s release. Leaders of the Economic Community of West African States threatened sanctions against Guinea, while the AU called for its Peace and Security Council to meet urgently over the matter.

Conde’s overthrow was necessary to address financial mismanagement and corruption in Guinea, and the deposed leader is safe and has been in contact with his doctors, Doumbouya said in a statement on Sunday.

“If you see the condition of our roads, of our hospitals, you realise that it is time for us to wake up,” Doumbouya said. “We are going to initiate a national consultation to open an inclusive and peaceful transition.”

The coup has upended a decade of stability in Guinea, and will be of concern to other African leaders, said Eric Humphery-Smith, Africa analyst at risk intelligence company Verisk Maplecroft.

“While the feeling among many Guineans is jubilation, make no mistake that this is two steps backwards for both the country’s democracy and economy,” he said in e-mailed comments. “Recovering what until now was a stable and predictable operating environment is anything but a given.”