Full extent of the country’s liabilities may well exceed official figure of $12.7bn as the previous government concealed numbers 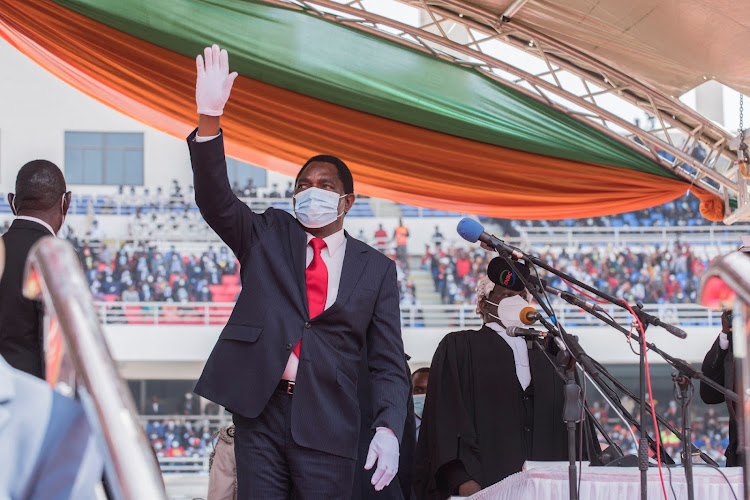 Hakainde Hichilema waves at the crowd after taking oath of office at the Heroes Stadium in Lusaka, Zambia, in this August 24 2021 file photo. Picture: GETTY IMAGES/SALIM DAWOOD

Zambian president Hakainde Hichilema’s government is trying to uncover the full extent of its obligations as it prepares to seek a bailout from the International Monetary Fund and begin talks to revamp the African nation’s debt.

Hichilema’s landslide victory in the election last month placed him in control of an economy with a “bigger hole” than he envisaged, having last year become Africa’s first pandemic-era sovereign defaulter. Years of government budget blowouts fuelled by over-borrowing left the state with at least $12.7bn in external debt, according to the most recent official figure.

“We had known for a long time that there was non-full disclosure,” Hichilema said in an interview on Tuesday, a week after taking office. “So now that we’re in, we are beginning to see that the debt numbers that were being talked about officially are not really the comprehensive numbers.”

An accurate picture of the nation’s debt may help remove a roadblock for talks with bondholders. It may also improve chances of a bailout deal with the IMF, a prerequisite for any debt restructuring.

“Introducing more transparency is of course positive but the size of the discrepancy is what matters most,” Phillip Blackwood, MD at EM Quest in London, said in an email. “How big is the hole is what investors are ultimately concerned with now, but this openness will of course enable current discussions with the IMF.”

Hichilema’s team, which he said was the “new kids on the block,” on Friday named Situmbeko Musokotwane as finance minister. He will lead talks with the IMF and Zambia’s lenders that range from the Export-Import Bank of China to funds holding its $3bn of Eurobonds.

“You have deals that were structured outside the normal channels; we’re talking about debt that was accrued, acquired without parliament approval,” Hichilema said. “One of our jobs right now is to dig into, trying to zero in on what the true debt is, both foreign and domestic debt. We are working through it and we’ll get to the bottom of it soon.”

Former President Edgar Lungu’s government has previously denied that it hid its obligations.

The Lungu government’s move to take over the operations of companies including Konkola Copper Mines and Mopani Copper Mines could also add to the official public debt levels, Hichilema said.

Hakainde Hichilema, who was sworn in as Zambia’s new leader on Tuesday, has struck a conciliatory tone after a tense presidential poll
Features
11 months ago