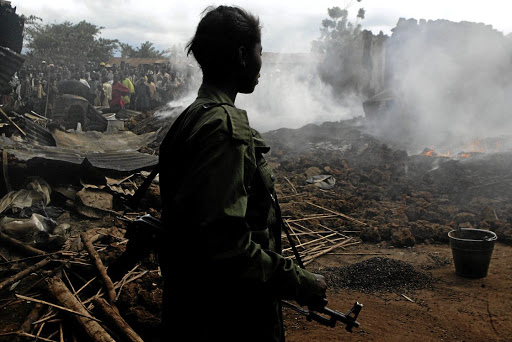 A rebel soldier in the DRC. Picture: REUTERS

Beni  — About 80 people are feared missing in eastern Democratic Republic of Congo (DRC) after attackers ambushed a convoy on Wednesday and set fire to 16 vehicles, a local parliamentarian said.

About 100 vehicles were travelling in a convoy with army protection on the road between the cities of Beni and Butembo when they came under fire, survivors said.

“The gunfire started near the village of Ofaye. Some vehicles were hit and then set alight,” one of the survivors, Malanda Dague, told Reuters. He said a friend of his was missing.

Jean-Paul Ngahangondi, an MP in North Kivu province, where the convoy started before crossing into Ituri province, said about 80 people were believed to be missing.

Attacks by the armed groups operating in eastern DRC’s borderlands with Rwanda and Uganda have continued unabated despite the government’s imposition of martial law in Ituri and North Kivu province at the beginning of May.

The installation of army generals as provincial governors was meant to quell a surge in violence that the military largely attributes to the Allied Democratic Forces (ADF).

But the number of civilians killed in such attacks has further increased since then, according to the Kivu Security Tracker, which maps unrest in eastern DRC.

Ngahangondi and DRC government spokesperson Patrick Muyaya blamed the attack on the ADF, a Ugandan militant group accused of killing thousands of people in recent years.

Muyaya said ADF fighters had set fire to 14 cars and two minibuses. He did not specify the number of people injured or missing.

Ngahangondi criticised what he said was the army’s slow response to the attack, a frequent complaint of local people.

“The army just waits for the rebels to kill the population and only then pursues them without any positive results,” he said.

Eastern DRC has been plagued by violence since regional wars around the turn of the century. Islamic State has claimed dozens of killings blamed on the ADF, though UN experts say they have not found conclusive evidence that IS has control over ADF operations.

Mount Nyiragongo has killed at least 31 and destroyed 3,000 homes as molten lava spreads towards Goma
World
3 months ago