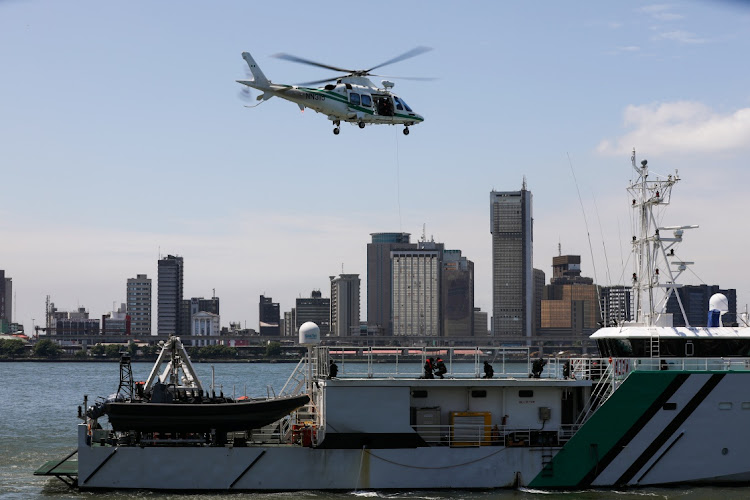 Lagos — Helicopters hover above a patrol vessel in Nigeria’s frenetic Apapa port as attack boats zoom past. On the dock, drones emblazoned with the Nigerian flag sit ready to deploy — all part of a $195m US-backed “Deep Blue” initiative to deter pirate attacks in the world’s most dangerous area for seafarers.

The more than 2.35-million square kilometre expanse of the Atlantic Ocean that borders on about 20 West African nations is known as “pirate alley”, where nearly all the world’s kidnappings at sea now take place since the water off Somalia in East Africa has become more secure.

Bashir Jamoh, head of the Nigerian maritime administration and safety agency, said the initiative has stemmed recorded kidnappings in the second quarter of 2021, after a record 130 sailors in 2020, compared with five in the rest of the world.

But there have already been 50 kidnappings logged this year and the US navy is helping with training and European navies are assisting in patrols, a mark of their concern for a region that is a key global supplier of crude oil.

“If the threat to their ships is not addressed, the entire international trade is affected.” Jamoh said.

Unlike Somalia, which had no navy and limited government capability and thus allowed foreign navies to fire on ships and arrest pirates, only Nigerian security forces are allowed to be armed in the country’s large territorial waters.

“Nigeria is going to take the lead,” Jamoh said.

Lurking beneath the government’s new show of maritime strength is poverty in the Niger Delta, where nearly all West Africa’s pirates originate. Pollution in the region where international and local firms churn out Nigeria’s oil means people cannot farm or fish and 70% of its roughly 30-million people earn less than $1 per day, according to the UN. This makes piracy attractive.

The UN Office on Drugs and Crime (UNODC) said collusion between some members of the security forces and pirates, as well as scant prosecution of kidnappings, must also be tackled.

“The issues that caused this in the Niger Delta have not been addressed,” said Max Williams, COO at security firm Africa Risk Compliance. “They still have the weapons, they have the boats, they have the fuel to kidnap people from these vessels.”

The Nigerian navy said this year it would strengthen measures to root out and punish security personnel who collude with kidnappers and criminals.

Piracy is nothing new to Nigeria, but the number and range of kidnappings have shot up, with oil tankers, container ships and fishing boats at risk even 370km offshore. In 2009 kidnappings for ransom accounted for only 15% of attacks, according to the UNODC; by 2020, these made up nearly all attacks as ransoms became more lucrative than any cargo.

The cost of freeing a group of hostages roughly doubled to up to $300,000 from 2016 to 2020, according to the UNODC, which estimated that Niger Delta-based pirates netted $4m in ransom payments in 2020.

The sum pales compared with Somali pirates’ more than 1,000 captives in 2010, but Nigeria’s vice-president put the economic cost in the billions, stifling much-needed development in a region disproportionately dependent on seaborne imports.

Jakob P Larsen, head of maritime and cybersecurity at shipowner association Bimbo, said many ship owners simply refuse to ply the waters, pushing up costs, while crews also refuse to sail in the region — and can demand double pay if they do.

Pirates typically take kidnapped sailors to the Delta’s swampy, snaking waterways, where they face malaria, typhoid and attacks from rival bands of kidnappers. Nationwide, kidnappings have spiked over the past year as the economy faltered. In January, a seafarer from Azerbaijan died during a kidnapping, and two others of unspecified nationality died of sickness during an abduction in 2020.

The Danish, Italian and Portuguese navies are also sending assistance and early in August, a hulking US expeditionary base — the USS Hershel “Woody” Williams — docked to help train regional security to use new kit.

Commanding officer Capt Chad Graham, asked about the underlying issues, said piracy is a “shore-based problem” but he and US consul-general Claire Pierangelo both said they were hopeful kidnappings will fall as the economy recovers from 2020’s coronavirus body blow.

Some pirate kingpins are well connected and have serious regional clout, the UNODC found. The navy also offers shippers, who are not allowed private armed security, navy escorts and extra protective services, an economic link Larsen said is unfortunate. “It introduces a conflict of interest because there is a money stream.”

Nigerian officials and the navy did not respond to requests for comment.

Insurance companies, led by underwriters Lloyd’s Market Association (LMA), last year expanded the size of the area in the Gulf of Guinea marked as highest-level risk. Neil Roberts, LMA’s head of marine and aviation, said despite Deep Blue, they are unlikely to change their assessment.

He cited social unrest in the Niger Delta and the “distressed fabric of the Nigerian economy. As long as that’s there, the extra risk will remain”.

Paramount Maritime taps growth in demand for security vessels, especially in the Gulf of Guinea
Companies
9 months ago

Through the AU and working with Nato, Africa could utilise the ocean economy to address its ‘poverty pandemic’
Opinion
1 year ago
Next Article