In just a few years, Aristide Kouame’s original methods have caught the attention of the establishment 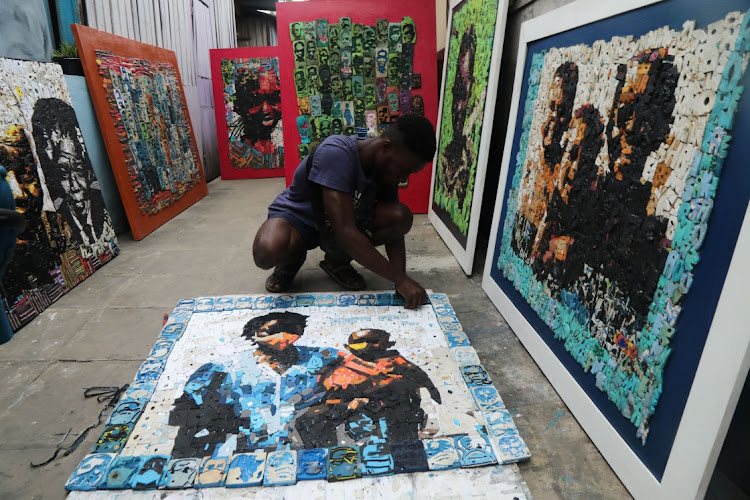 Abidjan — As Ivorian artist Aristide Kouame combs the beach with a big trash bag to gather discarded flip-flops and other footwear, he is aware that other beachgoers probably take him for a desperate street trader or possibly a madman.

Little do they know that Kouame, 26, transforms the flotsam into artworks valued at up to $1,000 by cutting the rubber and plastic soles into pieces that he assembles into large collages.

“This is the rubbish people have thrown into the sea and the sea brings it back to us because it doesn’t want it,” he said on a beach in Abidjan, Ivory Coast’s commercial capital.

“I make art from used shoes … It’s a way to give life to the objects that litter the beaches.”

Sitting on the floor of a narrow alley, Kouame carves shapes, letters and faces into the rubber soles of what he has salvaged from the beach. He makes his own paint by grinding what scraps remain into piles of technicolour pigment.

His technique is inexpensive and ecologically aware.

Plastic and other waste — including large quantities of flip-flops lost or tossed away — is strewn across most urban beaches in West Africa, as rubbish discarded into city canals is carried out to sea, then back to shore with the shifting tides.

In just a few years, Kouame’s original methods have caught the attention of Ivory Coast’s art establishment and his works have hung in galleries at home and abroad.

They range from large portraits of civil rights and political leaders such as Nelson Mandela to abstracts evoking societal ills including climate change, Covid-19 and wealth inequality.

On a recent afternoon in a chic neighbourhood in southern Abidjan, several of Kouame’s works hung in a gallery frequented by foreign art collectors.

Its director enthusiastically ushered patrons towards three large collages, each consisting of around 140 miniature portraits that Kouame carved from discarded flip-flops.

About 13-million tonnes of plastic waste are dumped into the world’s oceans annually, according to the UN. Two of Africa’s worst culprits, Ghana and Nigeria, share the same Atlantic coastline as the beach Kouame combs for supplies.

“My goal is to get people to question the issue of their environment, to create a better life,” Kouame said, solemnly looking back towards the plastic faces.

Pandemic proving to be a profit opportunity in Africa

Materials and energy, the region's benchmarks since colonial times, declined to 23% from 34% during the same period
Opinion
1 year ago
Next Article