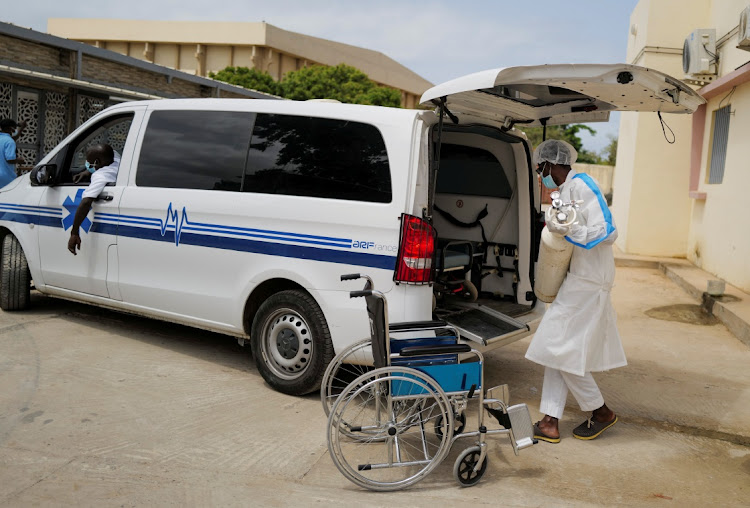 A health worker prepares to load an oxygen cylinder into an ambulance outside the infectious diseases department of the Fann University Hospital in Dakar, Senegal, on July 28 2021. Picture: REUTERS/ZOHRA BENSEMRA

Dakar — Idrissa Lo rushed back to Senegal from the US when family members started falling sick with Covid-19 and dying.

On Wednesday, he mourned a fifth family member lost to the virus — one of nearly 150 Senegalese to die this month as a third wave sweeps through the capital Dakar, leaving its hospitals nearly overrun.

“The one I lost two hours ago is my really close cousin. He was young, he was like 40 years old,” said Lo, a US-based transport worker, standing in the sun-baked yard of the hospital in Dakar’s Yoff neighbourhood.

“There is something going on — this is a real crisis.”

Senegal, which until July had recorded fewer than 44,000 cases and 1,166 deaths, has registered more than 15,000 cases and 139 deaths since the start of July, according to health ministry figures.

“Patients, particularly young ones, are arriving in respiratory distress,” Diallo said, her voice cracking with exhaustion. “We’ve never had this number of cases, deaths and severe cases. Frankly, this third wave threatens to drown us.”

Many infections outside clinics were going undiagnosed, while post mortems were not routine, she said. “The situation is much more serious. What we see here is only the tip of the iceberg.”

In Dakar, the epicentre of the epidemic in Senegal, every bed with supplemental oxygen for patients in severe respiratory distress was taken, she said.

Diallo said the hospital was not short of oxygen, though demand was so high that delivery workers said some of them were working night shifts to keep up.

Like many African countries facing a third wave of infections, Senegal is more vulnerable because so few people are vaccinated. It has administered fewer than 1-million doses to a population of about 16-million people, according to government data.

The Senegalese health ministry has vowed to ramp up vaccinations and this week welcomed fresh deliveries from China’s Sinopharm and Johnson & Johnson as well as a shipment of AstraZeneca doses under the Covax global distribution programme.

At Yoff hospital, hundreds of people queued for a vaccine on Wednesday. Many had arrived before dawn and expected to spend most of the day in line.

“We’re seeing 13-year-olds infected, people in their 20s dying,” said 58-year-old Ndeye Dia, who had been queuing for a shot since 6am. “It’s total panic now.”

Core profit jumped 57% in its six months to end-June, with the third wave having a muted effect on demand in most African countries
Companies
2 months ago

ICU admissions are high, but scientists caution against premature comparisons between the three Covid-19 waves
National
1 month ago
Next Article