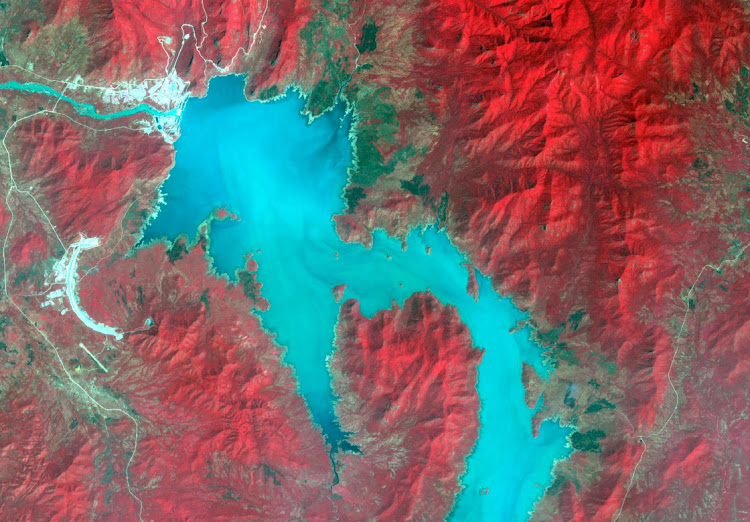 The Grand Ethiopian Renaissance Dam reservoir fills near the Ethiopia-Sudan border, in this broad spectral image taken on November 6 2020. Picture: Handout via REUTERS

As Ethiopia begins diverting 13.5-billion cubic metres of water from the Blue Nile river to its controversial new mega-dam, residents of Sudan to the south fear a repetition of last year’s devastating drought.

The second stage of filling the $4.5bn reservoir is ratcheting up tensions between Ethiopia and neighbours Sudan and Egypt, who depend on the Nile to support farming and generate power for their economies.

It is also altering decades of behaviour by the river, which normally swells in July when seasonal rains come. And it affects tens of millions of people living along the 6,500km-long Nile who rely on it for their water supply.

The move by Ethiopia to tap enough water to fill 5.4-million Olympic-size swimming pools was telegraphed for months. And yet it highlights how the many rounds of attempted mediation with Sudan and Egypt have failed, raising questions as to whether a solution can ever be found, or if Ethiopia will simply win by getting the dam filled in the meantime.

It also comes at a delicate time for the administration of Prime Minister Abiy Ahmed, who has a strong incentive to push ahead with the project and make good on his promises to rejuvenate an economy that is set to grow at a tepid 2% this year. While Abiy’s party leads the vote count in last month’s parliamentary elections, the Nobel Peace Prize laureate’s popularity has dropped from the levels he enjoyed when he first took office in 2018.

His military, meanwhile, have been embroiled in fighting in the northern breakaway region of Tigray for the past eight months, and his troops have also clashed with Sudanese soldiers in a disputed border region which contains a much-coveted fertile stretch of land.

None of the parties in the wrangling over the Grand Ethiopian Renaissance Dam want the dispute to set off a broader war. But the more the dam becomes a reality, the greater the risk is that it bleeds into pre-existing military frictions.

For Amal Hassen and her family in the town of Roseires in Sudan, about 60km downriver from the Ethiopian border, the loss of water supply to their home last year was a clear signal that the dam project, with its 6,000MW hydropower plant, spells disaster. She had to walk more than 1.5km to collect water in jerry cans from the river bank. Drinking that untreated water made her family sick.

“We tried to add chlorine to the river water so we could drink,” Hassen said at her home. “Every day, I would help the community to boil water.”

Ethiopia, Africa’s second-most populous nation, says the dam is needed to address chronic energy shortages and sustain its manufacturing industries; Sudan says filling the reservoir could hinder the southerly flow of water it requires to sustain its own electricity production and agriculture; and Egypt objects to a dam on a river that is the sole source of fresh water for as many as 100-million of its people.

As Abiy’s government moves ahead with the next stage of filling the dam, a diplomatic solution still looks elusive. That is despite many rounds of talks over a period of a decade, and the attempted mediation by the AU. There have also been attempts to rope in the US, the UN and the EU to help navigate an agreement.

Egypt foreign minister Sameh Shoukry, in New York for a UN Security Council meeting on the issue this week, stressed that both his country and Sudan are committed to talks and a peaceful settlement. Even so, “all options are on the table” when it comes to reaching that goal, he said in an interview with the pan-Arab satellite channel, Arabiya.

Egypt has suggested that the dam be filled over a period of as long as 15 years, and it is pressing for guarantees that water will be released during times of drought.

The repercussion of the failure to conclude a treaty became evident on July 13 2020, when the dam gates were closed as heavy rains pounded the Ethiopian highlands and 5-billion cubic metres of water were collected in its reservoir. No warning was given to the Sudanese, who operate a much smaller dam of their own downstream in Roseires.

A monitoring station located at the border between Ethiopia and Sudan showed the Nile’s water level plummeted 100-million cubic metres between July 12 and 13, Sudanese government logs show. The last time they dropped that low was in 1984, the driest year on record.

Ethiopia’s unilateral actions prevented the Sudanese from adjusting water levels at the Roseires dam and a smaller reservoir on the White Nile river to compensate for the filling of the Ethiopian dam, according to a Sudanese government document seen by Bloomberg. Government officials, residents along the Blue Nile’s banks and hydrological experts interviewed by Bloomberg gave the same account of how the filling unfolded.

While Seleshi Bekele, Ethiopia’s water minister, did not reply to questions, he has stated publicly that there is a conspiracy to thwart Ethiopia’s sovereign right to fill the dam. He has also said water flows to Sudan and Egypt will never be interrupted, and filling the dam will both reduce the risk of flooding in Sudan and the amount of sediment flowing downstream.

Flooding has been a perennial problem in the region. Last August, hundreds of homes, an untold quantity of crops and entire sections of road were destroyed in Sudan’s Blue Nile, Sinnar and Al -Jazeera states after heavy rains fell over Ethiopia after a long drought.

Government contractors are still busy repairing the road and bridges between Khartoum and Roseires, while homes close to the Blue Nile’s banks are still being rebuilt.

Mustafa Hussein, the head of Sudan’s technical negotiating team on the dam, said Ethiopia could have minimised damage by gradually filling the dam in August when the rainfall is heaviest, rather than retaining 5-billion cubic metres within a week in July.

Flooding and drought are not the only issues. In November, Ethiopia opened one of the dam’s lower gates for 42 minutes, releasing 3-million cubic metres of water, according to a description of the event recounted in a letter Seleshi wrote to his Sudanese counterpart.

While experts say Sudan is better prepared for this year’s filling of the dam, and plans to retain more water in the Roseires dam to avoid a drought, there is little it can do to prepare for another flushing of sediment.

“We will not be happy if it happens again,” she said. “We pray the government protects us this year.”

The development of the patch of land could be a boon for Sudan’s struggling economy, but could also fuel a growing feud between it and Ethiopia
World
5 months ago

Some of the main opposition groups are either boycotting the vote or banned from competing, while the more than 40 others that remain in the running ...
World
5 months ago