The development of the patch of land could be a boon for Sudan’s struggling economy, but could also fuel a growing feud between it and Ethiopia 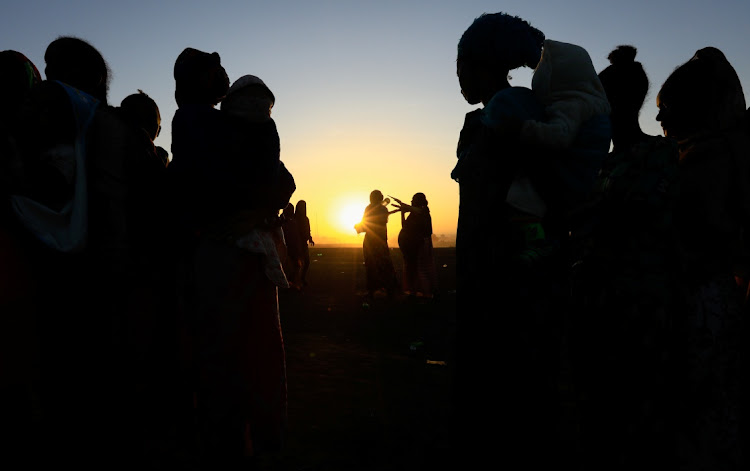 Ethiopians, who fled the ongoing fighting in Tigray region, gather at dawn within Hamdayet village on the Sudan-Ethiopia border, in the eastern Kassala state, Sudan December 15 2020. Picture: REUTERSMOHAMED NURELDIN ABDALLAH

Sudan’s development of a disputed border region has the potential to kindle an agricultural boom and an economic revival — or spark Africa’s next conflict.

After months of deadly clashes with neighbouring Ethiopia, Sudanese troops have taken control of much of al-Fashqa, a stretch of fertile land that has drawn interest from as far afield as the United Arab Emirates (UAE). Money has poured in, as Sudanese authorities build dozens of kilometres of new roads and offer training programmes and cheap loans for farmers.

“The liberation of al-Fashqa is happy news for us as investors,” Anwar Abdullah, an engineer for a unit of the country’s biggest conglomerate, DAL Group, told Bloomberg at an agricultural fair near the area in southeast Sudan. The company is importing Deere & Co combine harvesters to reap the crops.

It could be a boon for Sudan’s economy, struggling to recover after decades of mismanagement and isolation under ex-dictator Omar al-Bashir, but the risks have not gone away. While al-Fashqa’s rolling plains cover an area barely equivalent to the Scottish capital of Edinburgh, this patch of cotton and sorghum-producing land risks becoming a powder-keg in a growing feud between the Horn of Africa’s two most populous countries.

Ethiopia and Sudan are already at odds over Ethiopia’s plan to resume filling its giant Nile dam in July without an agreement on water flows, a key consideration for downstream Sudan and Egypt.

Sudan’s moves to consolidate its presence in al-Fashqa “will anger some of Ethiopia’s most powerful figures who have considerable agricultural interests in the disputed region”, said Jonas Horner, deputy director for the Horn of Africa for the International Crisis Group. A full-scale conflict over al-Fashqa runs the risk of bringing in their allies and “tipping off a more regional conflagration”, he said

The dispute over al-Fashqa dates to 1902, when Ethiopian Emperor Menelik II signed a boundary agreement with British colonial authorities, the terms of which were never fully recognised by Ethiopia. Tension that has periodically flared since, exploded in early 2020 when Ethiopian military units advanced into territory occupied by Sudanese settlers.

In November, the soldiers retreated as the army turned its attention to the northern Ethiopian region of Tigray and its dissident ruling party that challenged Prime Minister Abiy Ahmed’s authority. The ensuing conflict enabled Sudan’s army to recapture large swathes of land lost in the mid-1990s, when Ethiopian troops displaced hundreds of Sudanese farmers.

Clashes raged at points along the border in February. Dozens of soldiers on both sides as well as Sudanese civilians died in the past year, according to interviews with dozens of residents and military personnel in al-Fashqa.

“The majority of the land has been retaken and there are parts of the population who have moved back,” said Haj Ali, investment commissioner for Sudan’s Gadaraf state where al-Fashqa is situated. “Now the government is earmarking land and supplying both the training and financing to young farmers.”

The violence stymied a UAE plan to invest $8bn in al-Fashqa in a project that included the development of Port Sudan on the Red Sea and a railway from the harbour to Addis Ababa, Ethiopia’s capital, through the disputed territory, according to Sudanese Finance Minister Gibril Ibrahim.

The Emirati proposal failed to progress “due to the situation there,” said Ibrahim’s spokesperson, Motasim Adam.

While fighting in al-Fashqa has subsided in recent weeks, that may not last for long.

In June, Sudanese troops were seen transporting supplies from the regional capital, Gadaraf, to army units deep inside disputed territory. Sudan’s military is also building several bridges over the Atbara River in the southern part of the region near the Ethiopian border.

And Abiy’s government signalled last week that with the Tigray conflict now ending and preparations under way for the second filling of the Nile dam, it is turning its attention to regaining territory lost in the dispute with Sudan.

“Not only was our border invaded but as it became clear that the second filling was imminent, we see joint military drills,” said Redwan Hussein, spokesperson for the nation’s emergency task force on Tigray. “It is clear war parties are being planned for us.”

Sedal Woreda, home to about 25,000 people, has fallen under the control of an armed group according to reports, says Ethiopian Human Rights Commission
World
1 year ago

Egypt, Ethiopia and Sudan met in the DRC over the Grand Ethiopian Renaissance Dam with no progress being made
World
1 year ago
Next Article