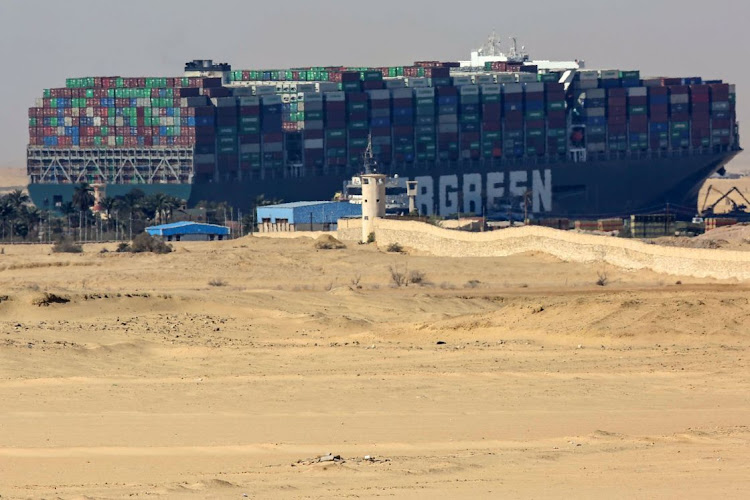 The Ever Given container ship is shown blocking transit along the Suez Canal in Ismailia, Egypt, in this March 28 2021 file photo. Picture: BLOOMBERG/ISLAM SAFWAT

A giant container ship that had blocked Egypt’s Suez Canal for nearly a week earlier in 2021 will be released on July 7 following an agreement between authorities and the vessel’s owners, the canal operator said Sunday.

A ceremony for the signing of the settlement ending the dispute over the 400m-long Ever Given will be held on Wednesday, and the ship will be allowed to depart, the Suez Canal Authority’s media office said by phone.

Earlier, Stann of London, the attorneys for the ship’s owner and insurers, said that a “formal solution” had been agreed upon and that preparations for its departure were being made.

Neither the SCA nor the attorneys provided details of the settlement. But the agreement marks an end to a dispute that arose after the Ever Given was freed after getting stuck in the vital waterway in March. The incident roiled global shipping markets.

The canal authority had initially sought over $900m in damages and compensation that included recovering expenses related to freeing the ship, lost revenue and other costs and claims. The figure was later lowered to $550m.

The SCA brought the matter to an Egyptian court, which ordered the seizure of the ship pending a resolution of the dispute. Authorities had said, however, that they were eager to reach an out-of-court agreement and that the ship would be allowed to leave once such a deal was reached.

The ship is being held in the Great Bitter Lake — about halfway along the canal.

BIG READ: Six days in Suez: The inside story of the ship that broke global trade

How the Ever Given and its billion-dollar cargo got stuck, got free, got impounded and got taken to court
Life
1 month ago
Next Article