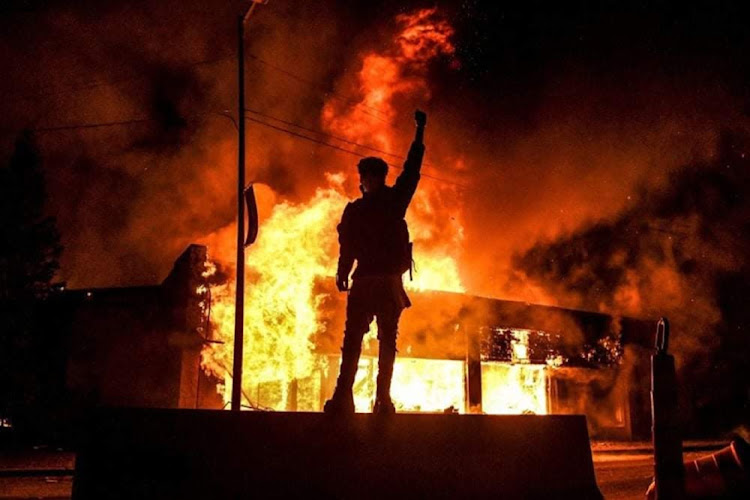 A protester watches as a building burns in eSwatini as part of the ongoing pro-democracy protests. Picture: SUPPLIED

The pro-democracy protests raging in the streets of eSwatini have forced SA businesses to close their operations in the kingdom while an impromptu curfew has forced health workers to sleep in hospital wards.

Violence, looting and burning of property intensified in eSwatini on Wednesday as clashes between police, the military and protesters gripped the tiny kingdom.

Nedbank, Pick n Pay and Standard Bank confirmed that they have closed some of their businesses in eSwatini.

“A number of our supermarkets and bottle stores have been damaged in the protests, and we have closed our stores as a precaution. No deliveries are currently able to cross the border,” Pick n Pay spokesperson Tamra Veley said on Wednesday.

Nedbank spokesperson Annaleigh Vallie said: “Nedbank can confirm that some of its branches in eSwatini have been closed due to protest action. The safety of our staff and clients is a priority, and we are monitoring the situation closely.”

Woolworths, Spar and FNB branches have also been affected.

Parties behind the protest have claimed that nine people have died since the protest started on Monday evening.

On Tuesday afternoon, the government announced a “surprise” curfew of 6pm to 5am, and this was followed by reports of an internet shutdown in the country at night.

Shops were burnt in Mbabane and Manzini while borders were also affected, with protesters from SA and eSwatini shutting down the Oshoek/Ngwenya border post. There was no public transport.

Healthcare workers also felt the effects of the protest on Wednesday. Nurses at Hlatikulu Government Hospital in Shiselweni district treated four protesters   for gunshot wounds on Tuesday and another two on Wednesday.

“This is a big thing for us because we are used to going up to two weeks without receiving a patient with gun wounds. We had to double up our effort because of the protests, because of high volume of injuries we get,” said a nurse at Hlatikulu.

He said the new curfew also caught hospital managers off-guard. eSwatini had a lockdown curfew earlier in 2021 that started at 10pm.

“Many of my colleagues who knock off at 3.30pm and 8pm could not go home because there was no public transport and those who finish their shifts in the evening could not leave as it was past curfew and hospital management did not prepare permits for them,” said another nurse from Mbabane hospital, adding that they had no choice but to sleep in the wards with patients.

“All offices should be closed by 3.30pm to allow workers to get home safely while essential workers will be required to produce a permit when travelling at night... Government has been following these protests and we want to assure the nation that these concerns have reached our ears and we are addressing them. We will be working with parliament and all concerned stakeholders to action them accordingly,” the eSwatini government tweeted on Tuesday.

Thokozane Kunene, general secretary of the Communist Party of Swaziland, said the curfew was imposed to discourage protesters.