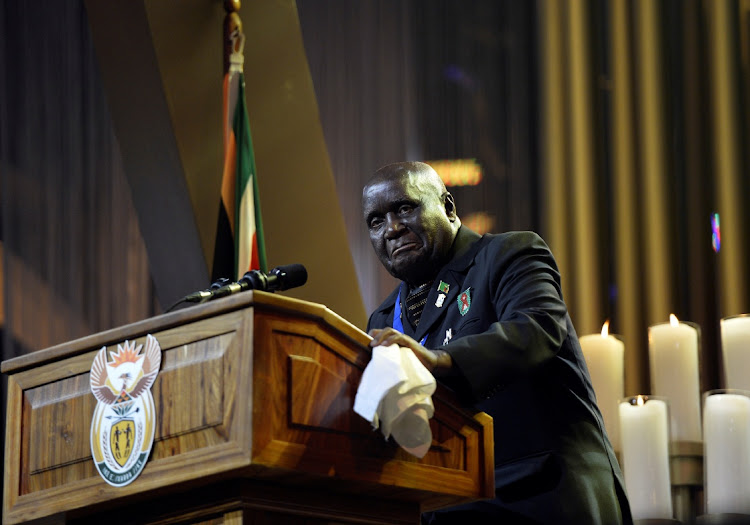 Lusaka — Kenneth Kaunda, Zambia's founding president who led his country for 27 years and championed Africa’s struggles against apartheid and HIV/Aids, has died at the age of 97.

“KK”, as he was popularly known, was being treated for pneumonia at the Maina Soko Medical Centre, a military hospital in Lusaka.

“On behalf of the entire nation and on my own behalf, I pray that the entire Kaunda family is comforted as we mourn our first president and true African icon,” President Edgar Lungu said in a message on his Facebook page.

Authorities declared 21 days of mourning for the liberation hero who ruled from 1964, after the southern African nation won its independence from Britain, until 1991.

Although Zambia’s copper-based economy fared badly under his stewardship, Kaunda will be remembered more for his role as an anti-colonialism fighter who stood up to white minority-ruled SA.

He shared a loss experienced by countless families in Africa when his son Masuzyo died of Aids in 1986, and he began a personal crusade against the virus.

“This is the biggest challenge for Africa. We must fight Aids and we must do so now,” he told Reuters in 2002. “We fought colonialism. We must now use the same zeal to fight Aids, which threatens to wipe out Africa.”

As leader of the first country in the region to gain independence from its European colonisers, Kaunda worked tirelessly in pushing other former colonies towards majority rule.

In 1991, he was forced to hold the first multiparty elections for 23 years, which he lost to long-time foe, trade unionist Frederick Chiluba.

Though he was widely admired as a warm and emotional man, the voters judged Kuanda to have overstayed his welcome in office and mismanaged the economy.

Kenneth David Kaunda was born on April 28 1924, the youngest of eight children of a Church of Scotland minister at Lubwa mission in the remote north of the country.

Known also by his African name Buchizya — the unexpected one — Kaunda undertook menial jobs to earn school fees after his father’s death. He also worked as a teacher and a mine welfare officer and entered politics in 1949 as a founder member of the Northern Rhodesian African National Congress.

In his early days of anti-colonial agitation, he cycled from village to village preaching majority rule.

A 1963 landslide victory for UNIP, which had broken away from the ANC five years earlier, led to Kaunda becoming prime minister of then-Northern Rhodesia. At independence in 1964, he became president of Zambia.

By the time he lost power, Kaunda’s popularity had slumped and hardship gripped most of the country’s 11-million people as the price of copper, Zambia’s main export, plummeted.

After 27 years of lecturing fellow Africans on how to build an independent nation, he was confronted by misery in his own backyard and anger among usually easy-going people.

A June 1990 doubling in the price of maize meal, the staple for most Zambians, sparked a three-day riot in which 27 people were killed, 150 injured and hundreds arrested as the army moved in.

The same month, an army lieutenant forced his way into a state radio studio and announced that Kaunda had been overthrown. People rushed into the streets, cheering.

The coup turned out to be a fiction and the lieutenant was arrested, but the public reaction had shown how low Kaunda’s popularity had sunk.

Kaunda was not ashamed to weep in public and had a unique speaking style, emphasising key thoughts by repeating entire sentences, his trademark white handkerchief in his left hand.

He espoused an ideology of “humanism”, a mix of  Christian ethics, traditional African values and socialist principles.

In foreign affairs, Kaunda was a high-profile figure among the seven Southern African states that led the fight against apartheid SA. He let Nelson Mandela's ANC make a home-in-exile in Lusaka during the three decades it was banned in SA.

Kaunda also played a leading role in Mozambique’s independence talks in 1975, Zimbabwe’s in 1980 and Namibia’s in 1990.

Despite accusations of corruption against his UNIP party, he won plaudits credit for heeding  the winds of political change and preferring peaceful transition to violent confrontation.

He was philosophical about his defeat in 1991. Urging unity and peace, he said in a broadcast: “Those who go into opposition are still an active catalyst for good government, indeed an integral part of good government.”

In 1996, Kaunda tried to make a political comeback, but he was blocked when Chiluba forced through constitutional amendments which declared the former “Father of the Nation” a foreigner because his parents came from Malawi.

He was arrested in December 1997 and charged with treason after an attempted coup by junior army officers two months earlier. He was detained in a maximum-security prison, but later placed under house arrest until the state dropped the charges.

After his son and political heir Wezi Kaunda was murdered in October 1999, Kaunda announced his withdrawal from domestic politics to concentrate on halting the spread of Aids through his Kenneth Kaunda Children of Africa Foundation.

Besides Masuzyo and Wezi, Kaunda and his wife Betty had six other children — four boys and two girls.

In his later years he led a quiet life, mostly staying at home and only occasionally appearing at state functions. In a rare public appearance in September 2019, at the age of 95, he spoke out strongly against a wave of attacks in SA against foreigners from other African countries.

“Our brothers and sisters in South Africa should remember that these same people they are treating with cruelty are the same people who were comrades in arms in fighting the brutal apartheid regime,” Kaunda said.

PODCAST | Unpacking the African economy: A story of growth or decline?

African CEOs optimistic about economic prospects, but worried about tax

French president’s hectoring, omniscient style has not gone down well on the continent
Opinion
1 year ago
Next Article

EDGAR LUNGU: The African century calls for a renewal of pan-African leadership

EDGAR LUNGU: The African century calls for a renewal of pan-African leadership