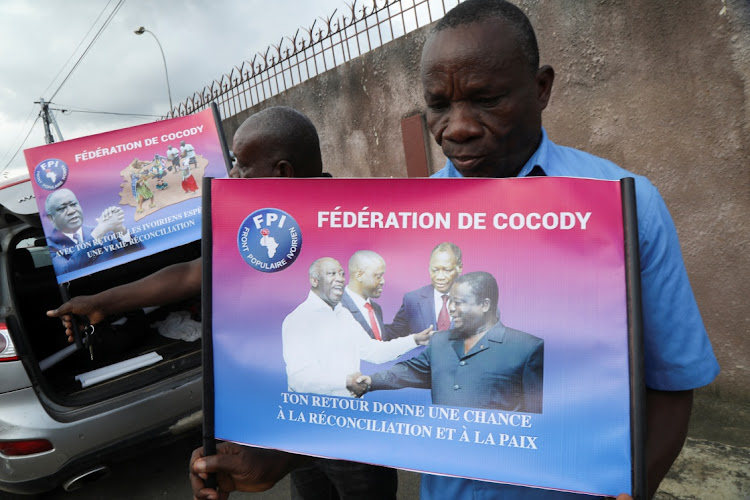 A supporter of former Ivorian president Laurent Gbagbo holds a poster outside his party's headquarters in Abidjan, Ivory Coast, June 16 2021. The poster reads, ‘Your return gives a chance for reconciliation and peace’. Picture: REUTERS/LUC GNAGO

Abidjan —  Ivory Coast's former president Laurent Gbagbo, ousted during a civil war in 2011 and acquitted of war crimes in The Hague, touched down on Thursday in the commercial capital Abidjan as crowds massed to welcome him home from a decade in exile.

A small number of loyalists allowed into the airport cheered and screamed as the Brussels Airlines flight landed. Elsewhere in Abidjan, police fired teargas during small skirmishes with larger groups of supporters.

Security was tight across the city, even as Gbagbo’s camp and the government of his political nemesis, President Alassane Ouattara, both said they hoped his presence would help reconcile the country.

His return has been eagerly anticipated by his supporters ever since his acquittal in 2019 on charges of war crimes and crimes against humanity at the International Criminal Court (ICC) in The Hague related to his role in the civil war.

Gbagbo, 76, came to office in 2000. His refusal to concede defeat to Ouattara in the 2010 election prompted the war in which more than 3,000 people were killed.

Ivory Coast, the world’s top cocoa producer, has seen rapid economic growth over the past decade but continues to experience occasional bouts of political and ethnic unrest.

Gbagbo has said little about what political role he might play back home. He retains firm support among his base of supporters, particularly in the south and west.

But he faces an outstanding 20-year prison sentence that was handed down in November 2019 on charges he misappropriated funds from the regional central bank. Ouattara said in April that Gbagbo was free to return, but the government has not said whether he has been pardoned.

In the Yopougon, Gbagbo’s stronghold in Abidjan, large crowds gathered in the morning to chant, "Gbagbo is coming, we will install him".

"We are here today to welcome him with joy and cheers because we need him for the country to reconcile and move forward," said Jean Baptiste Atiapo, who had gathered outside the headquarters of the party Gbagbo founded in 1982.

Earlier in the day, Gbagbo, wearing a white shirt and a face mask, waved to a small group of supporters as he boarded the plane in Brussels, videos shared on social media showed.

He has lived in Brussels since his release from prison in The Hague.