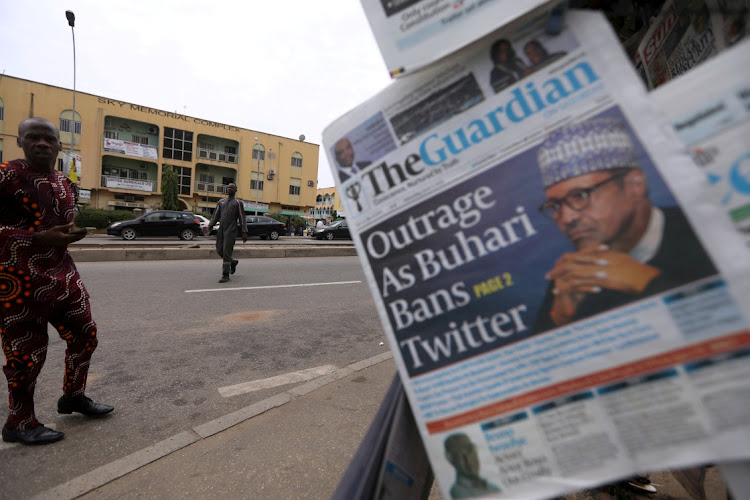 Abuja — Nigerian television and radio stations should not use Twitter to gather information and have to deactivate their accounts, the broadcast authority said following the move to suspend the US social media giant in Africa’s most populous country.

Nigeria’s government on Friday said it had suspended Twitter’s activities, two days after the platform removed a tweet by President Muhammadu Buhari that threatened to punish secessionists. Nigerian telecoms firms have since blocked access to Twitter.

International diplomats responded with a joint statement in support of “free expression and access to information as a pillar of democracy in Nigeria”.

Buhari, who was Nigeria’s military ruler in the 1980s, has previously been accused of cracking down on freedom of expression, though his government has denied such accusations.

Twitter has called its suspension “deeply concerning” and said it would work to restore access for all those in Nigeria who rely on the platform to communicate and connect with the world.

The National Broadcasting Commission, in a statement dated June 6, told broadcasters to “suspend the patronage of Twitter immediately”.

“Broadcasting stations are hereby advised to de-install Twitter handles and desist from using Twitter as a source of information gathering,” it said in the statement, adding that “strict compliance is enjoined”.

The statement comes two days after the attorney-general ordered the prosecution of those who break the rules on the ban.

The foreign minister on Monday held a closed-door meeting in the capital, Abuja, with diplomats from the US, Britain, Canada, the EU and Ireland to discuss the ban.

It followed the statement by their diplomatic missions on Saturday in which they criticised the move.

“These measures inhibit access to information and commerce at precisely the moment when Nigeria needs to foster inclusive dialogue ... as well as share vital information in this time of the Covid-19 pandemic,” they said in their statement.

Nigeria’s information minister on Friday said the ban would be “indefinite” but, in a statement late on Sunday, referred to it as a “temporary suspension”.

The minister did not immediately respond to phone calls and text messages on Monday seeking comment on the altered language.