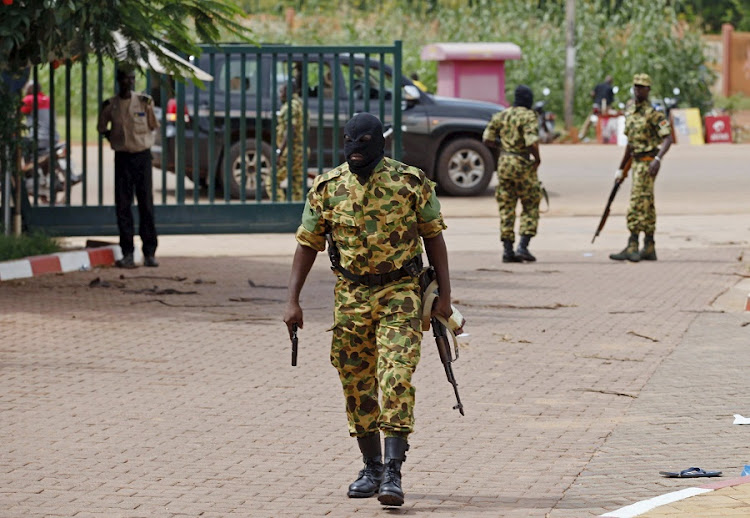 Presidential guards at the Laico Hotel in Ouagadougou, Burkina Faso, after an earlier attack. Picture: REUTERS

Ouagadougou — The death toll from the worst militant attack in Burkina Faso in recent years has risen to 160, the government said at the weekend, after armed assailants laid siege overnight to a village in the jihadist-plagued northeast.

The attackers struck on Friday night, killing residents of the village of Solhan in Yagha province, bordering Niger. They also razed homes and the market, the government said in a statement.

It declared a 72-hour period of national mourning, describing the attackers as terrorists, though no group has claimed responsibility. Another 40 residents were wounded, government spokesperson Ousseni Tamboura later told reporters.

The UN said secretary-general Antonio Guterres was outraged by the attack, during which seven children died.

Despite the presence of thousands of UN peacekeepers, attacks by jihadists linked to al Qaeda and Islamic State in West Africa's Sahel region have risen sharply since the start of the year, particularly in Burkina Faso, Mali and Niger, with civilians bearing the brunt.

The violence in Burkina Faso has displaced more than 1.14-million people in just more than two years, while the poor, arid country is hosting about 20,000 refugees from neighbouring Mali.

The latest attack pushes the number killed by armed Islamists in the Sahel region to more than 500 since January, according to Human Rights Watch's West Africa director, Corinne Dufka.

"The dynamic is the jihadists come in, they overpower the civil defence post and engage in collective punishment against the rest of the village — it's a pattern we've seen everywhere this year," Dufka said.

In March, attackers killed 137 people in co-ordinated raids on villages in southwestern Niger.

Worsening violence in the wider Sahel region has led to one of the world's most acute humanitarian crises, UN says
World
1 month ago

The appointments, including several military officials to top posts, follow a coup in August that deposed President Ibrahim Boubacar Keita
World
8 months ago
Next Article