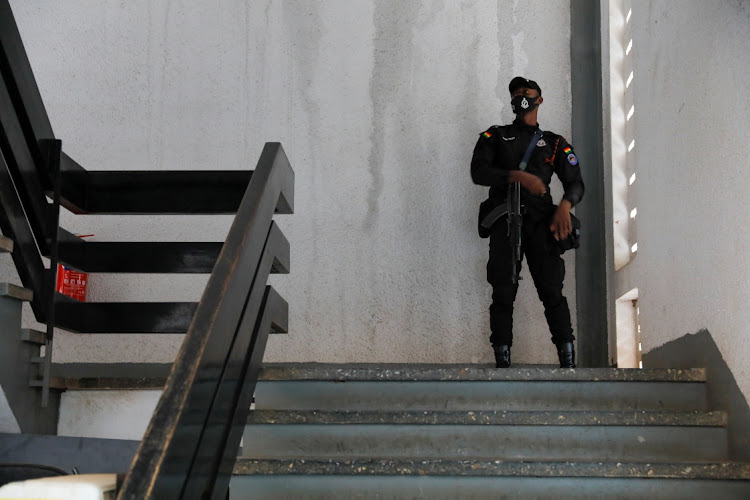 A police officer stands guard before the bail hearing of the 21 people who where detained by police and accused of unlawful assembly and promoting an LGBTQ agenda, in Ho, Volta Region-Ghana June 4 2021. Picture: REUTERS/FRANCIS KOKOROKO

Ho — A Ghanaian court on Friday delayed its ruling on a bail application for 21 Lesbian Gay Bisexual and Transgender (LGBT+) activists detained two weeks ago for an allegedly unlawful gathering, which the rights group denies.

The delay will mean the group will have to spend at least four more days in detention.

LGBT+ people face widespread persecution in the West African nation where gay sex is punishable with up to three years imprisonment. Community members have reported a crackdown by authorities and increased abuse by the public in recent months.

The 16 women and five men were arrested on May 20 at a hotel, police said in a statement, alleging the group had gathered illegally. It also said the group was advocating LGBT+ activities with books and flyers with titles including, “Coming out” and “All about Trans”.

Promoting gay rights is not illegal in Ghana and LGBT+ Rights Ghana said the arrests were unlawful. The organisation said the activists had met for a workshop on how to document and report human rights violations.

“We cannot condone a situation where people attend a workshop on rights only to be arrested and have those very human rights they were learning about be trampled upon,” said Julia Selman Ayetey, a lawyer for the defendants.

A judge in the district court of Ho said the court would consider the bail application carefully and that there would be a ruling on whether to grant bail on June 8.

Ghana has not prosecuted anyone for same-sex relations in years, but LGBT+ people face frequent abuse and discrimination, including blackmail and attacks, human rights researchers say.

The recent crackdown began in February after LGBT+ Rights Ghana opened the country's first LGBT+ community centre. It was forced to close after three weeks after an uproar from church groups, politicians and anti-gay rights organisations.

Ghana's President Nana Akufo Addo, who was re-elected in December for another five-year term, vowed during a church ceremony in February that same-sex marriage will never be legalised during his time in office.

The statement stirred up homophobic sentiment and emboldened a group of lawmakers who want to criminalise the promotion of LGBT+ rights in the country, said community members and activists.

“The arrest of the 21, just like the closure of our office, are all deliberate actions by very powerful forces to break down the LGBT community,” said Suhaidatu Dramani, programmes director for LGBT+ Rights Ghana.

The world is still fighting outdated laws and ideas about homosexuality, helped by leaders such as Margaret Thatcher, which hold bac testing for HIV
World
1 month ago
Next Article