Mount Nyiragongo has killed at least 31 and destroyed 3,000 homes as molten lava spreads towards Goma 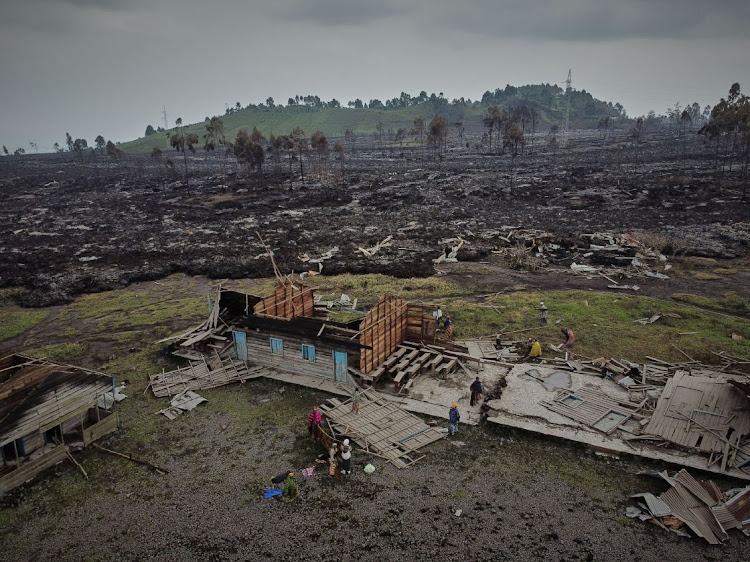 People prepare to evacuate from recurrent tremors after homes were covered with lava by the eruption of Mount Nyiragongo near Goma in the DRC, taken on May 25 2021. Picture: HANDOUT VIA REUTERS/SAVE THE CHILDREN/HUGH KINSELLA CUNNINGHAM

Goma — About 400,000 people need support or protection after fleeing a volcano eruption and a wave of aftershocks in eastern Democratic Republic of the Congo (DRC), the UN said on Friday.

At least 31 people died when Mount Nyiragongo sent a wall of lava spreading towards the city of Goma on Saturday, destroying 3,000 homes along the way and cutting off a major road used to bring aid to the strife-torn region.

The lava stopped just short of the city limits, but thousands more people fled early on Thursday when the government warned that the volcano, one of the world’s most active, could erupt again.

Many escaped to Sake, a town 120km northwest of Goma that is prone to cholera outbreaks, the UN children’s fund (Unicef) said.

“With an increased risk of a cholera outbreak, we are appealing for urgent international assistance to avert what could be a catastrophe for children,” Unicef’s representative in the DRC, Edouard Beigbeder, said.

Authorities issued an evacuation order at about 1am local time on Thursday after radar images showed molten rock flowing under Goma.

The movement of magma caused cracks in the surface and hundreds of earthquakes, which could allow it to burst through to the surface in a fresh eruption, the Goma Volcano Observatory (OVG) said.

The frequency and intensity of the ground tremors have lessened in the past 24 hours, suggesting the risk of a fresh eruption was subsiding, Celestin Kasareka Mahinda of the OVG said on Friday.

“I don’t think we will have a second eruption. The problem is the risk of fractures, but the risk is small, around 20%,” he said.

Authorities have reopened the main road that was split in two by the lava on Saturday, the UN Office for Co-ordination of Humanitarian Affairs said on Thursday.

Goma is a major humanitarian hub supplying aid to a region hit by decades of unrest.

The outbreak was contained using Merck’s Ebola vaccine, which was given to more than 1,600 of the patients’ contacts
World
1 month ago