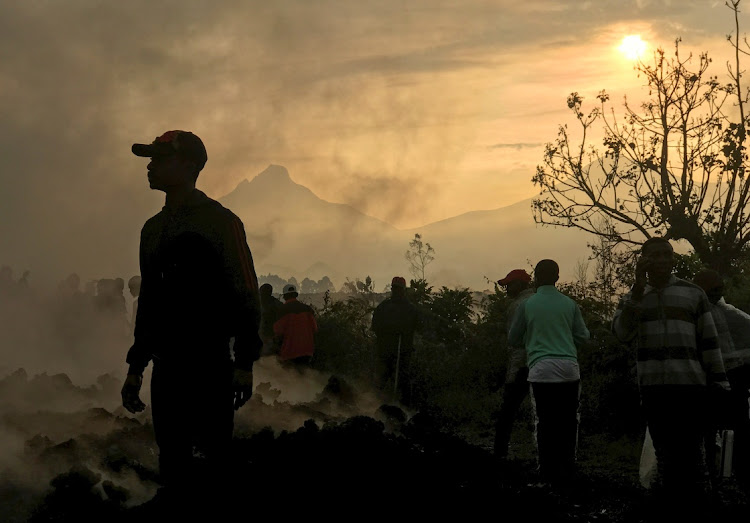 Residents walk near homes that were destroyed in a volcanic eruption near Goma, in the Democratic Republic of Congo, May 23 2021. Picture: REUTERS/DJAFFAR AL KATANTY

London — Earthquakes following a volcanic eruption in Goma, a city near the Democratic Republic of Congo’s border with Rwanda, are disrupting exports of tin concentrate from mineral-rich North Kivu province, the International Tin Association (ITA) said on Thursday.

The disruption to Congolese tin exports — which account for 8% of the world’s tin concentrate, according to the ITA — is likely to worsen shortages of the soldering metal, prices of which last week touched 10-year highs at $30,650 a tonne.

Tin ore producers have been unable to obtain the permits they need to export the material because government offices in Goma, North Kivu's capital city, are shut, the sources said.

“It is currently unclear when Goma will be declared safe again, and government offices will reopen,” the ITA said.

Congolese authorities ordered the partial evacuation of Goma on Thursday, saying Mount Nyiragongo volcano could erupt a second time with little or no warning after more than 200 small and medium earthquakes shook the city following Saturday's eruption.

About 200 tonnes to 250 tonnes of tin concentrate move through Goma every month, the ITA said, citing a source close to producers in the region.

Tin concentrates typically contain about 50%-70% metal, so up to  175 tonnes of tin concentrate could be disrupted, the ITA said.

The ITA said it expects producers in North Kivu to continue operating despite delays to export permits, and sees a short-term build-up in concentrate stocks at mining operations, followed by greater exports once licences can be renewed.

Most of North Kivu’s tin ore exports come from Alphamin Resources’s Bisie mine near Walikale, 230km west of Goma.

Meanwhile, thousands of people fled Goma on Thursday, some picking their way across landscapes scarred with lava, after officials said a second volcanic eruption could happen any time.

Magma had been detected beneath the city and the adjoining Lake Kivu, Constant Ndima Kongba, the military governor of North Kivu province, said, citing seismic and ground deformation data.

“Given these scientific observations, an eruption on land or under the lake cannot be ruled out at present, and it could occur with very little or no warning,” he said.

Thirty-one people were killed on Saturday evening when Mount Nyiragongo, one of the world’s most active volcanoes, sent a wall of lava downhill towards the city, destroying hundreds of buildings on the way.