The law calls for the reintroduction of the role of prime minister and two deputies, and creation of a role that recognises the head of the opposition 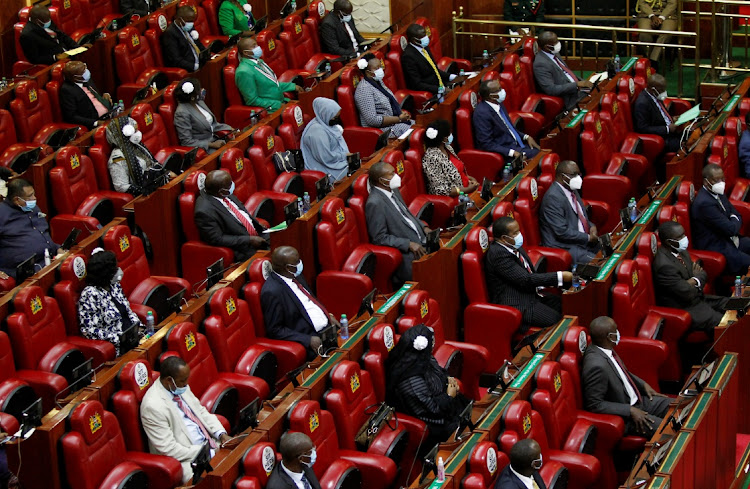 A view shows Kenyan members of parliament and senators attending an address by Tanzanian President Samia Suluhu Hassan inside the parliament buildings in Nairobi, Kenya, in this May 5 2021 file photo. Picture: REUTERS/MONICAH MWANGI

Kenyan legislators backed a plan to restructure the government and share power more equitably to help avoid a repeat of violent election disputes.

The National Assembly, led by speaker Justine Muturi, approved the constitutional amendment bill late on Thursday, with 224 voting in favour, 63 rejecting it and two abstaining. The proposed changes, known as the Building Bridges Initiative, will be put to a referendum that’s expected to take place before a general election scheduled for 2022.

The new legislation calls for the reintroduction of the role of prime minister and two deputies, and the creation of the position that recognises the head of the opposition. President Uhuru Kenyatta and opposition leader Raila Odinga have said the changes will provide greater political representation for the nations dozens of ethnic groups and end winner-take-all elections.

Kenya, a regional hub for global brands including Alphabet and Coca-Cola, has struggled to put an end to vote-related clashes. A dispute over a 2007 ballot left more than 1,100 people dead, while more recent elections have also been marred by violence.

The bill has raised concern that a bigger government will require more spending at a time when the state is struggling to narrow its budget deficit from a projected 8.7% of GDP in the year to the end of June.

Kenyatta and Odinga joined forces to support the proposed changes after a reconciliation in 2018. The detente split the ruling party, with supporters of deputy president William Ruto saying it was aimed at preventing him from succeeding Kenyatta in 2022’s election.

Both Kenyatta and Odinga have denied the initiative has anything to do with who succeeds the president.

Ruto has also criticised parts of the bill, arguing that adding positions to the executive won’t necessarily create an inclusive government. He’s also said a proposal that allows the president to appoint an ombudsman for the judiciary could compromise its independence.

The proposed legislation also calls for an increase in the share of the national budget that goes to regional governments to 35% from 15%. Kenyatta and Odinga have both argued that change will strengthen governance in the country’s provinces.

Proponents for the referendum, however, must overcome a legal huddle before it can proceed. Earlier in 2021, the high court ordered the electoral body to halt plans for the plebiscite pending the hearing of several lawsuits challenging the proposed constitutional changes.

While the Senate is scheduled to separately vote on the bill next week, the constitution allows the process to proceed when either of the two houses of Kenya’s bicameral parliament approves it.

“The only hurdle now is the court petition challenging the amendment,” said Kamotho Waiganjo, a Nairobi-based lawyer.

Bloomberg News. For more articles like this, please visit us at

The coronavirus variant known as B.1.617 has been confirmed in in Kenya, Uganda and Morocco
World
2 months ago

Health experts worry that public scepticism could prolong a pandemic that has already killed more than 3.3-million people worldwide
World
2 months ago
Next Article