Tackling a rare disease in a global pandemic

The Guinea worm can grow up to a metre long before emerging through the skin, leading to serious disability 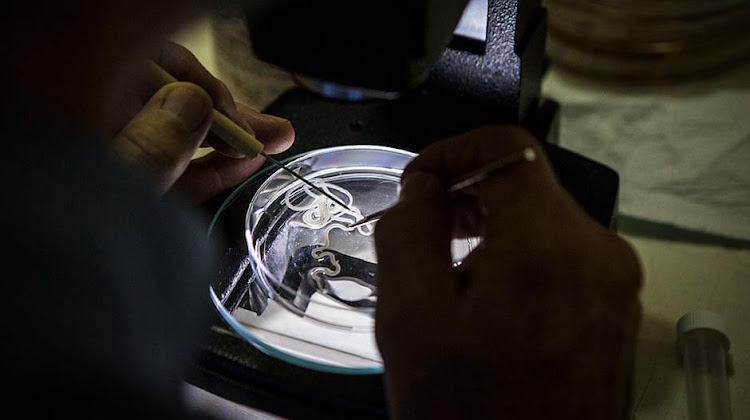 The Guinea worm under the microscope. Picture: CARTER CENTER/J HAHN

Addis Ababa — Okello Aballa Ognum regularly has to walk deep into the jungles of southwest Ethiopia to treat the water ponds that harbour a debilitating parasitic disease.

Painstakingly, he measures the water volume to determine how much chemical treatment to use against copepods, the tiny water fleas that carry the Guinea worm larvae.

If ingested by humans, the larvae can grow up to a metre long before emerging through the skin, leading to serious disability and the need for amputation in the worst cases.

Killing them is only part of Okello’s job — he also teaches the community about the dangers of drinking unfiltered pond water.

“We tell them we are [treating] the ponds, but we are not killing all the copepods,” he told the Thomson Reuters Foundation from Gog district in Ethiopia’s Gambella region. “Don’t think that since this pond was [treated], we can drink, that it is free [of the larvae].”

Guinea worm afflicted 3.5-million people 35 years ago. Only 27 human cases were reported in 2020, most in Ethiopia and Chad, according to the Carter Center, the organisation set up by Jimmy Carter that leads the international eradication campaign.

That was 50% less than in 2019 and the former US President has said he hopes to live to see the last case of Guinea worm, which would be only the second disease after smallpox to be eradicated in human history.

Eradication of Guinea worm is one of the goals the World Health Organization (WHO) set out in January when it published its road map to tackle 20 neglected tropical diseases (NTDs) by 2030.

Together, these curable or preventable diseases affect more than 1.7-billion people in some of the world’s poorest countries, often severely disabling them and leaving them isolated and unable to earn a living.

Last year’s progress on Guinea worm came despite the impact on public health systems from the Covid-19 pandemic, which has hit efforts to tackle some NTDs, particularly where health workers were required to travel to sufferers.

Adam Weiss, director of the Carter Center’s Guinea worm eradication programme, said the community-centred approach had been key to success in tackling a disease for which there is no vaccine or treatment.

‘Beyond the end of the road’

In Gambella, where 11 human cases were reported in 2020, dozens of community members such as Okello have been mobilised to treat ponds, provide drinking water, and raise awareness of the dangers of drinking contaminated water.

The disease disproportionately affects poor rural communities with no access to clean water and Guinea worm officers work with community leaders and volunteers, going house to house to look for suspected cases and distribute filters.

“We have to remember that this parasite is designed to survive. It’s found a way to sustain itself in populations that really are ... beyond the end of the road,” said Weiss.

One major obstacle to progress in the past decade has been animal infections. Chad went 10 years with no reported cases of Guinea worm before the disease suddenly reappeared in humans in 2010, apparently driven by dogs consuming raw fish then infecting water sources.

Volunteers trained under the national eradication programme encourage people to bury discarded fish parts, while cash rewards are given to those who report infected animals and keep them away from water sources.

Ethiopia detected the worms in baboons in 2013, according to Kassahun Demissie, co-ordinator of the Ethiopian Dracunculiasis Eradication Programme. Dracunculiasis is the name sometimes used for the infection caused by the Guinea worm

“This makes it difficult to eradicate this disease because we don’t know the dynamics of wild animal infections,” he said.

Owar Ojulu Aballa, a field co-ordinator for the Carter Center in the Gambella region, pointed to another problem — poor villagers deliberately infecting themselves to get the 10,000 birr ($240) compensation, a significant sum in one of Ethiopia’s most deprived areas

They can also count on villagers to help educate the community, such as Obang Odol Okello, who was infected in April last year and was in severe pain until the worm was slowly removed by rolling it over a wooden stick.

The father of two was barely able to walk and could not grow his maize and sorghum or stop wild baboons from eating his crops, a painful experience that has helped him as a volunteer in the eradication programme.

“I always take the time to show them what happened to me last year,” said Obang, who is paid 300 birr to go house to house and urges people to use the cloth and pipe water filters.

“To eradicate guinea worm disease right now, there must be safe water,” he said, adding that the disease could be eradicated immediately if everyone had access to clean water.

“The end is in sight,” said the Carter Center’s Weiss. “But we also have to be mindful that more research, more investment in the communities, is required to overcome some of the last-mile challenges.”

The disease kills about 400,000 people a year, largely in Sub-Saharan Africa, with most being children under five
World
2 weeks ago

The soldier, shot about five times, had a 27cm parasitic worm in his digestive system, possibly caused by the use of ‘night soil’
World
3 years ago

Guinea has recorded three confirmed and four probable cases of the often fatal Ebola virus, including five deaths
World
2 months ago
Next Article