A source says they are re-ballasting the ship and expect that with a favourable tide, cargo will not need to be removed 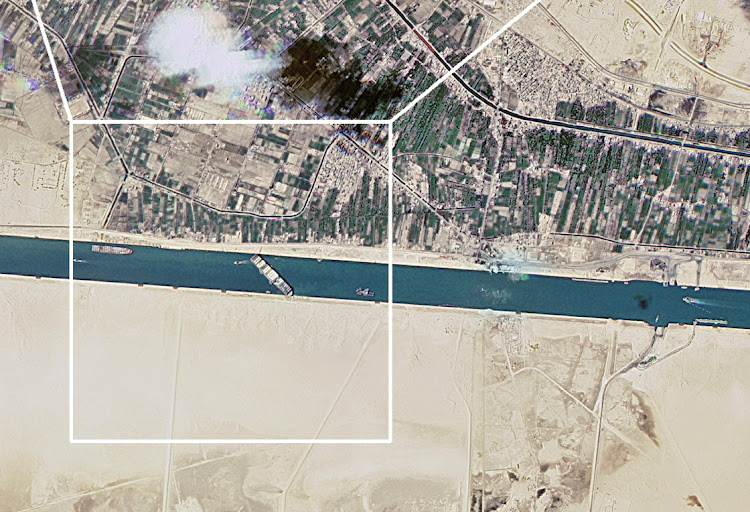 A satellite image shows the Suez Canal blocked by the stranded container ship Ever Given in Egypt, March 25 2021. Picture: TWITTER/D-G ROSCOSMOS/DMITRY ROGOZIN

Ismailia — A huge container ship blocking Egypt’s Suez Canal for nearly a week has been partially refloated, the Suez Canal Authority (SCA) said on Monday, raising hopes the busy waterway will soon be reopened for a huge backlog of ships.

The 400m-long Ever Given became jammed diagonally across a southern section of the canal in high winds early last Tuesday, halting shipping traffic on the shortest shipping route between Europe and Asia.

After further dredging and excavation at the weekend, rescue workers from the SCA and a team from Dutch firm Smit Salvage worked to free the ship using tug boats in the early hours of Monday, two marine and shipping sources said.

“It is very possible that by today noon shipping activity would resume, god willing,” Rabie told Egyptian state television on Monday. “We will not waste one second.”

The SCA has said it could accelerate convoys through the canal once the Ever Given was freed. “We have movement, which is good news. But I wouldn’t say it’s a piece of cake now,” Peter Berdowski, the CEO of Smit Salvage’s parent company, Boskalis, told Dutch public radio.

High-pressure water would be injected under the bow of the ship to remove sand and clay but if that was unsuccessful, containers might have to be removed from the ship, which would cause a considerable delay, he said.

A source involved in the salvage operation told Reuters on Monday that they were re-ballasting the ship and expected that with a favourable tide, cargo would not need to be removed.

“The good news is she’s moved. But she is still stuck in the mud. A second large anchor-handling tug will arrive this morning. Hopefully they will be able to pull her free.”

Video posted on social media appeared to show the ship had swung around, opening space in the canal. Other footage, which could not be immediately verified by Reuters, included cheering and ships’ horns sounding in celebration.

Crude oil prices fell after news of progress in refloating the ship, with Brent crude down $1 per barrel to $63.67.

Shares of Taiwan-listed Evergreen Marine Corp — the vessel's lessor — rose 3.3%. About 15% of world shipping traffic transits the Suez Canal, which is a key source of foreign currency revenue for Egypt.

Some shippers rerouted their cargoes around the Cape, adding about two weeks to journeys and extra fuel costs. A note from AP Moeller Maersk seen by Reuters said it had so far redirected 15 vessels around the Cape after calculating that the journey would be equal to the current delay of sailing to Suez and queuing.

The Suez Canal logjam - caused by a massive container vessel blocking one of the world's busiest shipping routes - may increase traffic to SA.
Business
3 weeks ago

About 12% of global trade goes through the canal, including coffee and other comestibles — then there’s the container shortage
World
3 weeks ago
Next Article