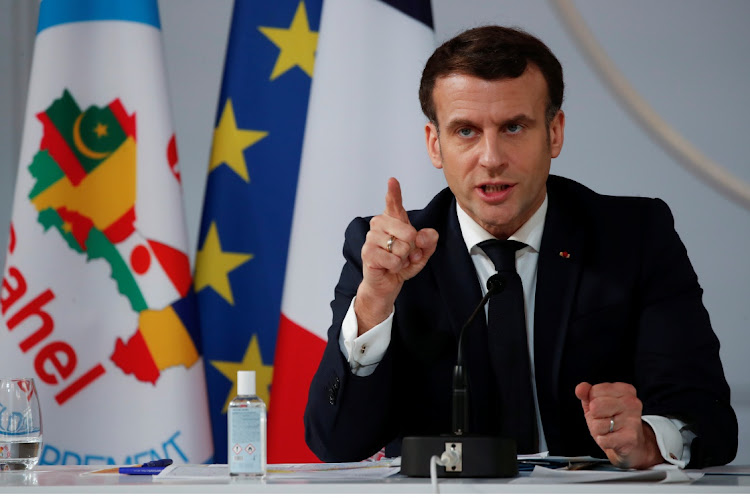 French President Emmanuel Macron gestures as he delivers a speech after a meeting via video-conference with leaders of West African G5 Sahel nations, in Paris, France, February 16 2021. Picture: FRANCOIS MORI/REUTERS

France won’t change the number of troops deployed in the region “in the coming months”, Macron said after two days of talks with the leaders of Mauritania, Mali, Niger, Chad and Burkina Faso in N’Djamena, Chad. Macron joined the discussions remotely because of the coronavirus pandemic.

“Rushing a French withdrawal, which is one of the options I have reviewed, would be a mistake,” Macron said.

The summit follows one in January 2020 in the southern French city of Pau, which resulted in the governments of the region promising to take on more responsibility and France increasing its deployment by 600 soldiers to 5,100.

Macron is under pressure to come up with an exit plan about 14 months before French presidential elections. A recent poll showed voters are increasingly weary of the war that’s in its eighth year and cost France about €911m in 2020, according to the latest public figures, while some Sahelians resent the military presence of a former colonial power.

France’s presence in the region only makes sense if governments there do more to address local grievances that fuel extremism and “work on political reconciliation”, Macron said. So, while French troops focus on the fight against terrorism, local officials will be able to engage in talks with civilian armed groups ready to lay down their arms and commit to the fight against the extremist groups.

Sahel  countries are expected to reinforce their presence in areas where France has made gains. During the summit, Chad committed to adding 1,200 troops to the tri-border area that links Burkina Faso, Mali and Niger, which is plagued by insurgency.

By the summer, progress on these fronts should help the French government decide how to define a new, nimbler strategy, Macron said. He gave no details on what that would look like, speaking only of a “significant evolution”, with France remaining a “pillar” of Takuba — the task force created after the Pau summit that groups special forces from nine European countries and aims to shore up the French operation, known as Barkhane, as well as Malian forces.

In defending France’s continued presence in the region, Macron repeated previous statements that Barkhane exists for the collective security of the region and the wider world, and that it has significantly weakened local groups affiliated to Islamic State and Al-Qaeda.

Macron urged “faster, stronger” progress on efforts to restructure the debts of African countries whose economies have been damaged by the pandemic. And he revived a bid to obtain funding from the UN that was blocked by the Trump administration.

US secretary of state Antony Blinken delivered a video message to the summit, according to a Macron aide. The US is already providing military support to Barkhane, but France hopes the new administration will do more.

So far, 57 French soldiers have lost their lives in the eight years of fighting. Thousands of civilians have died in the conflict in the arid region south of the Sahara that’s one of the poorest in the world.

France and Africa — a fraught past but a firm future relationship

France has a complex history with the continent, but wants to put in the work to ensure an equitable working partnership from now on
Opinion
8 months ago

Bilateral trade amounts to €3bn a year, and 370 French companies are providing more than 65,000 jobs
Opinion
10 months ago
Next Article