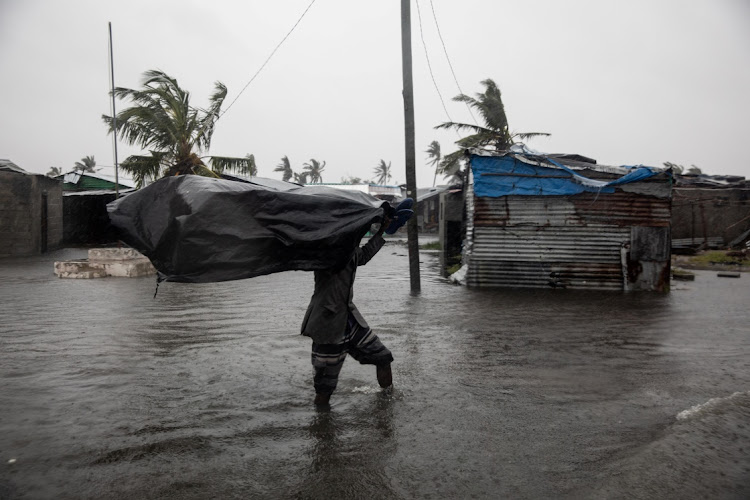 A resident of Praia Nova seeks shelter from tropical cyclone Eloise in Beira, Mozambique, at the weekend. Picture: UNICEF/FRANCO/REUTERS

Severe winds and heavy rains wrecked thousands of buildings, ruined crops and displaced almost 7,000 people in Mozambique over the weekend, officials said in their first detailed report on the disaster.

Authorities initially said Eloise had only caused minor damage in Mozambique's port city of Beira but that it was too early to gauge the full extent of the damage across the rest of the region.

On Sunday, Mozambique's National Institute for Disaster Risk Management and Reduction (INGD) said investigations had shown Eloise had injured 12 people and displaced 6,859. The region's Buzi district had been particularly hard hit with wind speeds of up to 150km/h.

“With high flood waters and power lines down in Buzi, the challenge will now be reaching people most in need,” she added.

Eloise had ruined 136,755ha of crops, destroyed nine schools and damaged about 17 other schools and 11 hospitals, INGD said in a statement.

It had completely destroyed 1,069 houses, partially destroyed 3,343 and flooded another 1,500, the agency added.

Eloise later weakened and was downgraded to a tropical storm, according to the World Meteorological Organisation.

On Sunday, it moved from Zimbabwe to dump heavy rain on some areas of SA's Limpopo, Mpumalanga and KwaZulu-Natal provinces, authorities there said.  Gauteng’s emergency response teams were put on high alert.

“So far the highest amount that we've recorded is somewhere between 115mm-128mm of rainfall in Limpopo, especially in the northeast,” Puseletso Mofokeng, a senior forecaster at the SA Weather Service, said.

Floods had hit the low veld of Limpopo and Mpumalanga, and winds had blown the roofs of houses and knocked down trees, blocking roads, he said.

Certain parts of those provinces were likely to see another 100mm of rain overnight and more rain was expected on Monday, he added.

Heavy rains were also recorded in eastern and southeastern parts of Zimbabwe on Saturday, filling most dams and flooding some rivers. At least three people were swept away when they tried to cross flooded rivers in eastern Zimbabwe, authorities said.

LISTEN | The worst is over, but SA should remain cautious – SA Weather Service

Advances in ‘event attribution science’ show how big a role climate change has played in a specific event, such as US heatwaves and flooding in China
World
9 months ago
Next Article