Tunisia has another night of protests amid economic malaise 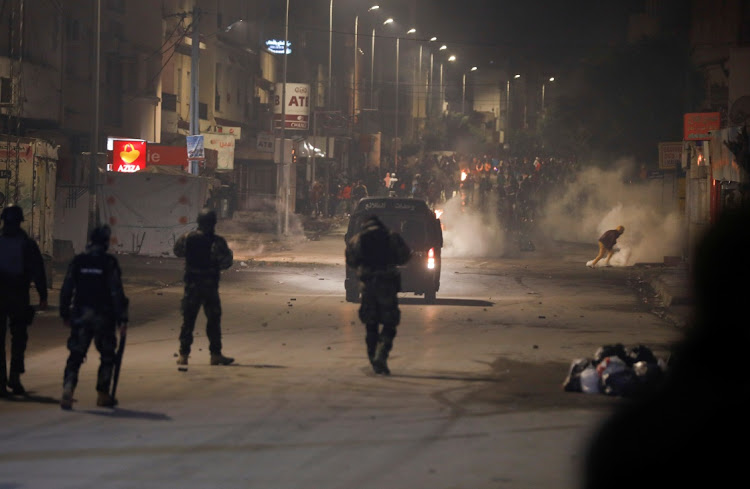 Rabat/Tunis — Tunisia saw another night of anti-government protests after the prime minister acknowledged “legitimate” anger at the nation’s economic malaise while warning against the use of violence.

Demonstrators blocked roads, burnt tires and skirmished with police in mainly working class neighbourhoods of Tunis and the central city of Kasserine, local broadcaster Mosaïque FM reported. More than 600 people have been arrested in upheaval that began late last week.

Prime minister Hichem Mechichi said he “understood the anger and frustration of the youth” amid a “critical” economic situation, in a televised address on Tuesday evening, but he added that “chaos is not acceptable” and attacks on property would be met with the full force of the law.

In earlier comments that day to a security committee, he’d labeled much of the upheaval criminality and sabotage by “delinquents”, the state-run TAP news agency reported.

Tunisia, the cradle of the Arab Spring, has had more than 10 governments in the decade since a wave of protests toppled president Zine El-Abidine Ben Ali in 2011 and rippled across the region. The political instability has hampered efforts to reduce youth unemployment and corruption, key drivers of the revolt, while repeated terrorist attacks slowed the crucial tourism industry even before the Covid-19 pandemic depressed global travel.

Mechichi is currently embroiled in a dispute with President Kais Saied that’s holding up decision-making. He has proposed replacing almost half his cabinet, a step that needs parliamentary approval in the coming days.

The protests “are a revolution by the hungry”, said Mohammed Ammar, chair of the Democratic bloc in parliament. “There is great resentment and a feeling of oppression 10 years after the revolution.”

On Tuesday, a group of about 20 NGOs denounced what it called excessive use of force by authorities and urged them to engage with protesters and listen to their demands. It said some activists have been targeted in the arrests.

Those arrested so far include youths who tried to attack a security output in Manouba, western Tunis, Mosaïque FM reported. Others were caught preparing firebombs in Ariana, part of greater Tunis, and the central city of Kasserine, Diwan FM said.

North of the capital, a court in the city of Bizerte jailed eight people for two years for involvement in “nocturnal acts of riots”, TAP reported on Tuesday.

Africa private-equity investors have a R30bn cash pile after pandemic

Businesses in the education, health care and retail sectors operating online are among the top picks for investors
World
1 year ago
Next Article

US ambassador is meddling in politics, Uganda says

US ambassador is meddling in politics, Uganda says