The violence has displaced 100,000 people so far with reports of mass killings, looting and burning of crops 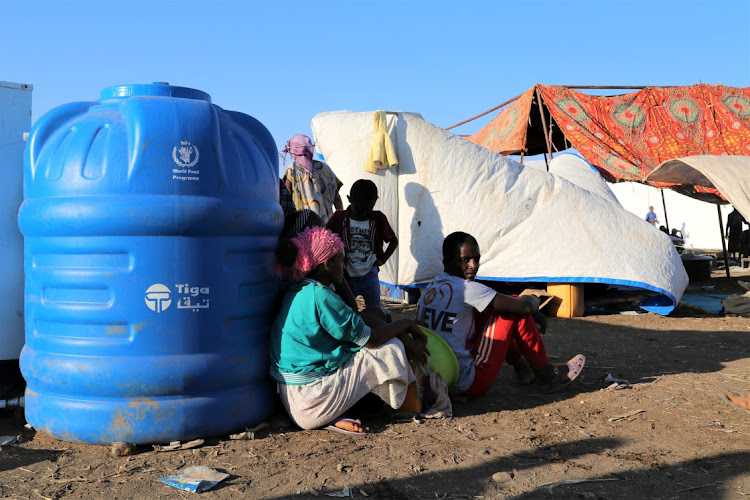 Ethiopians who fled the ongoing fighting in the Tigray region, wait to be processed for emergency food and logistics support by the World Food Program in Hamdait village on the Sudan-Ethiopia border in eastern Kassala state, Sudan. Picture: HANDOUT VIA REUTERS

Nairobi/Addis Ababa — Officials from Ethiopia’s northern Tigray state delivered a grim assessment of the devastation wrought by two weeks of fighting with the federal government.

The conflict is raging along four fronts and has displaced 100,000 people, according to the Tigray friendship liaison office, a diplomatic branch of the regional government. At least three people died in aerial attacks on Mekele, the state capital, and several homes and a church were destroyed, while an unknown number of casualties occurred during a bombardment of the city of Zalambessa, it said.

“The closure of financial institutions is spreading the risk of urban starvation,” Wondimu Asamnew, the office’s director-general, said in a statement on Wednesday. “There are reports of mass killings, looting and burning of crops in areas of Tigray that have been taken over by either Eritrean or other Ethiopian forces.”

Ethiopian army forces began an incursion into Tigray on November 4, after months of tension between the federal and regional governments. Telecommunications in the region have largely been cut off, making it difficult to verify either side’s account of what has transpired during the fighting. Assessments by diplomats and aid agencies broadly correlate with some of the information supplied by Wondimu’s office.

The national government hasn’t provided recent statistics on deaths or injuries. The Ethiopia Red Cross Society said on Wednesday that it has transported hundreds of people injured in clashes, with more than 400 people treated so far in a hospital in Gondar in the Amhara region, which borders on Tigray.

Scores of civilians were killed by unidentified attackers in the Tigrayan town of May Cadera on November 9, according to London-based human-rights organisation Amnesty International. About 500 people died in the attack, a regional media agency known as AMMA reported.

Even before the latest violence there were 96,000 refugees and 100,000 internally displaced people in Tigray, according to the UN.

The UN Office for the co-ordination of humanitarian affairs estimates an additional 1.1-million people in Tigray and two neighbouring regions are expected to need aid as a result of the conflict. A lack of fuel and the communication blackout have hampered efforts to accurately assess what supplies are needed and deliver them, it said in a bulletin.

The conflict has placed at risk four refugee camps in Tigray that house more than 60,000 refugees from neighbouring Eritrea — which has long been at odds with Tigray, Wondimu said. He urged the international community to ensure they weren’t forcibly repatriated or killed.

“Efforts to establish humanitarian corridors have so far been rejected by the federal government,” Wondimu said. “We continue to seek their establishment as the humanitarian crisis worsens.”

The federal government has so far resisted calls by the UN, AU and several foreign governments to de-escalate the conflict and agree to international mediation. Neighbouring Somalia echoed the call on Wednesday.

“The federal government of Somalia reiterates its support for the unity of Ethiopia and calls for dialogue to amicably end the internal conflict,” it said in a statement. “Now, more than ever, our region needs to consolidate its collective contributions with the common goal of peace and security.”