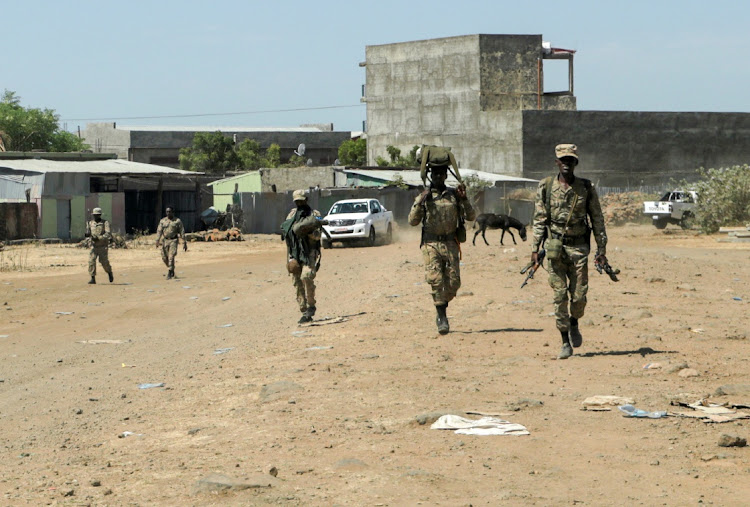 Members of the Amhara special force return to base after fighting against the Tigray People's Liberation Front (TPLF), in Danasha, near a border with Tigray, Ethiopia, November 9 2020. Picture: REUTERS/TIKSA NEGERI

Nairobi/Addis Ababa — Ethiopia’s army advanced on the capital of the rebellious Tigray region amid international concern that fighting is spreading beyond the nation’s borders.

The government said federal soldiers captured the southern Tigrayan town of Alamata, south of the capital of Mekele, as Tigrayan President Debretsion Gebremichael said his forces fired missiles at neighbouring Eritrea in retaliation for their backing Ethiopian troops.

The UN reiterated its appeal for access to thousands of refugees inside Tigray who are fleeing the conflict.

Ignoring repeated international calls for dialogue, Prime Minister Abiy Ahmed said the government’s “resolve to apprehend the criminal elements within the Tigray People’s Liberation Front [TPLF] is stronger than ever”, according to a statement on Sunday.

Conflict broke out in Ethiopia on November 4 when the army struck Tigray in retaliation for an alleged assault on a military base that Abiy blamed on the Tigray region’s government.

Relations between Tigray and Abiy’s administration have been strained since he took office in 2018 and began consolidating power, sidelining the TPLF, once the nation’s pre-eminent power.

The attacks have led to a humanitarian crisis in the region. Even before the latest spate of violence there were 96,000 refugees and 100,000 internally displaced people in Tigray, according to the UN.

Ethiopia’s deputy prime minister, Demeke Mekonnen Hassen, said at the weekend the government would shortly finish its military exercise against the TPLF.

Addressing members of the diplomatic corp and international agencies, Demeke said the military operation, which has killed hundreds and caused more than 11,000 people to flee to Sudan, is going to plan.