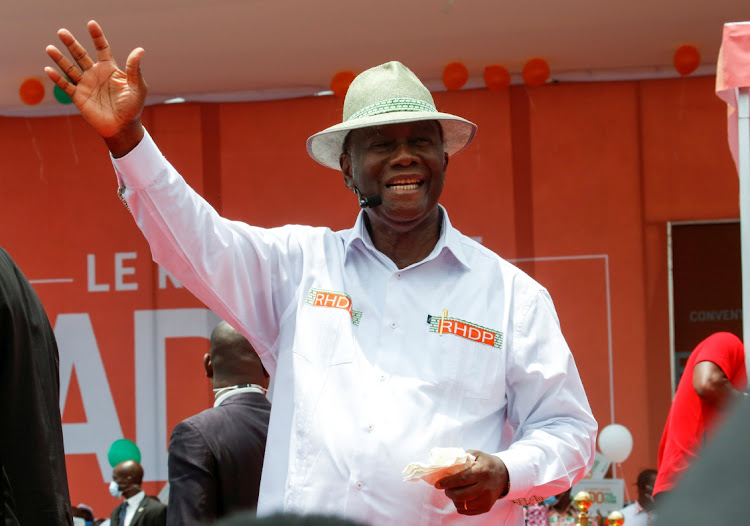 Abidjan — Ivory Coast President Alassane Ouattara is set to face a candidate that got just 4% in the last vote, as stronger rivals boycott the October 31 elections to deny it legitimacy.

Ouattara’s other two would-be opponents, Henri Konan Bédié and Pascal Affi N’Guessan, have maintained calls for their supporters to boycott every part of the electoral process in a bid to discredit the vote. That has left Konan Kouadio Bertin, a farmer and former lawmaker as Ouattara’s lone challenger.

“We are two candidates,” Bertin, who’s known as KKB, said in a tight office at the ground floor of a house nestled in a residential patch of Abidjan, the country’s commercial hub. “If I win, it will be a legitimate win.”

A fight for legitimacy is at the centre of this week’s vote in the world’s top cocoa grower. Bédié, the leader of the biggest opposition party, the Democratic Party of Ivory Coast (PDCI), called last month for a campaign of civil disobedience to protest Ouattara’s third-term bid, leading to near-daily protests across the country. The government blamed that campaign for 16 deaths recorded in Dabou, 50km west of Abidjan, last week.

“Dabou has become a symbol of this regime’s brutality against its children, and its attempt to clamp down on legitimate civil disobedience,” N’Guessan said in a joint opposition statement Monday.

Ouattara is seeking a third term in office after the Constitutional Council ruled on September 14 that he could run even though the country limits the presidency to two terms. While Ivory Coast’s highest court didn’t provide an explanation for its decision, Ouattara had previously said that a new constitution adopted in 2016 wiped his slate clean.

His bid to extend his 10-year tenure follows the sudden death in July of his preferred successor, Amadou Gon Coulibaly, saying he would run again for the sake of the country’s stability.

Ouattara, a former International Monetary Fund (IMF) executive who first came to power after a four-month civil war, has presided over annual economic growth of at least 7% since 2012, his first full year in office.

As of October 25, only 41% of voters had collected their voting cards, according to a statement from the country’s electoral commission. Voters will, however, be able to retrieve them up until the day of the vote.

N’Guessan, who got 9.3% of the vote in the last election, said the ballot is a “parody” in Monday’s statement, endorsed by Bédié. Neither candidate had so far withdrawn their candidacy, a commission spokesperson said on Tuesday.

“We’re candidates because it’s our right to run,” N’Guessan said on TV5Monde, the French television network. “We’re waiting for Mr Ouattara to come to the negotiating table so that together we can ensure the legal conditions for the vote are met to ensure fair and transparent elections.”

Ouattara told the Paris-based Journal du Dimanche he wouldn’t make any more concessions to his main opponents who, according to him, are trying to instigate a coup d’état.

That leaves him facing KKB, who describes himself as a farmer and politician after a long career within the PDCI. He chose to run as an independent candidate after his party snubbed him in favour of Bédié.

“I’ve maintained my candidacy because I don’t agree with them,” KKB said. “I will win.”

Africa has recorded fewer than 5,000 Covid 19-related deaths, but strict lockdowns have stripped many of their livelihoods
World
1 year ago