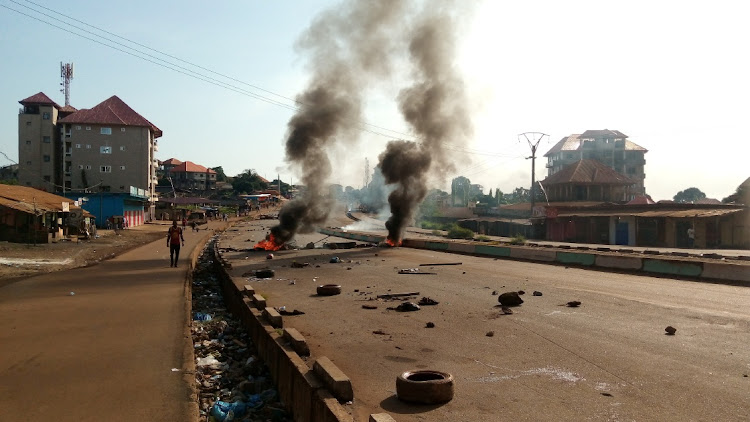 Conakry — Guinean President Alpha Conde led the vote count in half of the nation’s 38 districts on Thursday amid clashes between opposition supporters and security forces that have left at least nine people dead.

Conde garnered the most ballots in 14 areas, while opposition leader Cellou Dalein Diallo obtained a majority in six, Kabinet Cisse, the head of the electoral commission, said on state television late on Wednesday. Election officials expect to complete the count in the remaining districts by the end of the week.

Diallo, a former prime minister, claimed on October 19 that he had won the vote, based on his campaign’s tally of results from polling stations. Clashes erupted after early results from the electoral commission showed Conde in the lead.

Conde and Diallo were the two front-runners going into the election. Conde has the advantages of incumbency, a well-funded campaign and backing from Russia, whose companies have invested heavily in mines to extract the nation’s abundant iron-ore and bauxite reserves. Diallo was the runner-up in the 2010 and 2015 elections.

The Red Cross Society of Guinea on Thursday suspended relief operations in parts of the capital, Conakry, after protesters attacked its headquarters on Wednesday. Two vehicles and several motorcycles were set alight, while nine other motorcycles were taken by the protesters, the institution’s president, Youssouf Traore, said by phone.

“No volunteers were injured but it is difficult to intervene in these conditions because our safety is not guaranteed,” he said.

Guinea will hold a second round of voting on November 24 if no candidate secures more than 50% of the ballot.

Researchers find 94 pages ‘clearly’ tied to the ruling party that don't disclose they are being paid to post political messages and pictures of ...
World
1 year ago

Across the continent, democracies are in need of help — including from investors — to stave off abuses of power
Opinion
1 year ago
Next Article