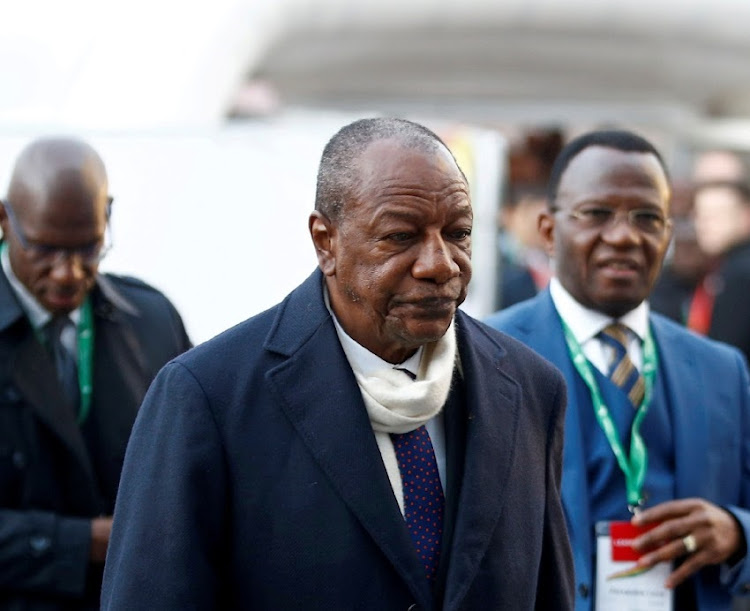 Conakry — Voters in Guinea went to the polls on Sunday to decide whether to extend the rule of 82-year-old President Alpha Conde, who in March pushed through constitutional changes allowing him to run for a third term.

At least 50 people have been killed over the past year during demonstrations against the new constitution, according to Amnesty International, and violence erupted repeatedly during campaigning.

There were no reports of unrest on Sunday, but a number of people including one of the candidates said they had been turned away at polling stations because of problems with their voter cards.

The election comes at a delicate moment in West Africa, where concerns are growing over a slide in democratic gains. In August, Mali’s government was overthrown by the army, while in Ivory Coast months of protests against President Alassane Ouattara’s bid for a third term on October 31 have turned violent.

In the west of Guinea’s capital, Conakry, dozens of voters queued quietly to vote in a primary school whose exterior was plastered with posters of Conde.

“I hope that things will happen in peace,” said Mariama Camara, a housewife.

But across town in the Koloma Soloprimo neighbourhood, an opposition stronghold, several voters said they had been unable to participate because of voter card problems.

“When I arrived at the polling station, I was told my card was not valid,” said resident Fatoumata Barry.

While no reliable opinion polls are available, many political analysts expect Conde to prevail after he won overwhelming approval for the new constitution in a referendum in March —though that vote was boycotted by the opposition.

Conde faces 11 challengers, including his long-time rival Cellou Dalein Diallo, a former prime minister who finished runner-up to Conde in elections in 2010 and 2015.

After casting his vote, Diallo said he was worried that Conde would steal the election with “cunning and violence”.

One of the candidates, former foreign minister Makale Camara, said she herself had not received a voter card at all, and so had been unable to vote.

“That’s totally unacceptable because there are people who ended up with three or four cards,” she said.

“It’s a holy mess they’ve organised there. If there can be ‘fictitious’ citizens, a candidate cannot be fictitious.”

Conde, who has described the constitutional reform that allowed him to run again as fair and democratic, says he needs more time to finish big mining and infrastructure projects in the West African country.

“Guinea cannot develop if there is no peace, security and unity. We do not want violence,” he said after casting his ballot at the Boulbinet primary school in Conakry.

“Those who want to challenge the results must do so within a legal framework, with recourse to the Constitutional Court,” he added, dressed in white and flanked by bodyguards.

Guinea has made progress developing its mineral riches, including bauxite and iron ore, and GDP has doubled under Conde’s presidency. But many Guineans complain the mining boom has not ended frequent power cuts and unemployment.

Hamden Dali, previously Hamden Atig Dali, can drop ‘atig’ which means ‘liberated by’, opening the door for thousands of other cases
World
1 year ago

The pandemic’s outcome in Africa stands in stark contrast to what was predicted, particularly by outsiders
Opinion
1 year ago

In a sign of the desperate times, the returning migrants brandish mobile phones and coveted food items bought in SA to sell back home
World
1 year ago

Data this week showed cocoa processing in Europe fell 4.7% in the third quarter, to the lowest for that period in four years
Business
1 year ago

Assets seized from the two generals implicated in corruption include a brewery, vehicle assembly plant and a cement factory
World
1 year ago
Next Article

Protests in Guinea as president suspected of extending his term

Protests in Guinea as president suspected of extending his term