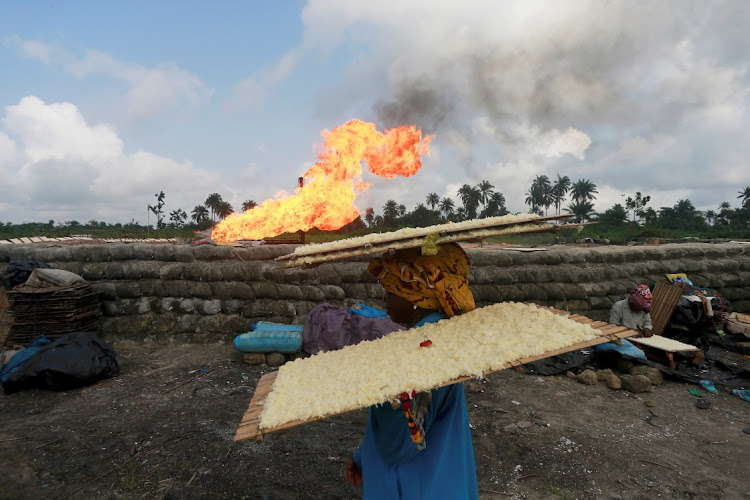 A woman carries wooden trays laid with tapioca, which is derived from cassava paste, at a flow station in Ughelli, Delta State, Nigeria, on September 17 2020. Picture: REUTERS/AFOLABI SOTUNDE

Ughelli — Jonah Gbemre often has no electricity, but he says his home is permanently lit at night by the flames of waste gas being “flared” near his hometown in Nigeria's Delta State.

Like Gbemre, nearly half of Nigerians have no stable power supply, yet government attempts to harness gas belching from its oilfields to generate urgently needed electricity or revenue have stalled.

And experts say that without progress towards its 2030 target of virtually eliminating flaring, which releases carbon dioxide along with polluting methane and soot, Nigeria cannot meet its pledge to cut greenhouse gas emissions by 20%.

“This flare site makes the nights like days,” said Gbemre, his eyes both bloodshot and milky, something he said his doctor attributes to the burning of the waste gas.

Reuters could not establish if there was any link between Gbemre's eye problems and the flaring. Nigeria's National Oil Spill Detection & Response Agency has said the practice can damage human health and the environment.

After sunset, nearly 200 blinking flares dot the landscape around Port Harcourt, the Delta oil hub. Experts say the gas that Nigeria flares nationwide could be worth billions of dollars if captured and transported to be used as liquefied natural gas or for plastics or fertilisers.

But a 2016 programme by the Nigerian government to address this by auctioning rights to capture and sell flared gas is struggling, six sources close to the process told Reuters.

The coronavirus crisis has compounded delays to a project which the World Bank hoped could serve as an example in its bid to cut global warming through zero flaring globally by 2030.

Oil-producing nations all flare some gas, particularly at remote fields or where there is ageing infrastructure.

Nigeria first targeted gas flaring in the late 1970s and, through various schemes and regulations, has more than halved it since 2001. Chevron, Shell and Eni, which operate in Nigeria, say they have cut flaring by some 90% and are working to cut it further. ExxonMobil and Total declined to comment.

But as the largest sites were harnessed, progress stagnated and flaring rose last year, a government-run satellite tracker shows, while Gbemre has little faith in the state, which he notes missed its own deadlines in 2004, 2008 and 2020.

Although Nigeria's department of petroleum resources (DPR) approved 200 bidders in February, it said in June, when the sites should have been awarded, that the process was delayed by six weeks due to coronavirus-related restrictions.

“If this bidding round doesn't succeed, that's the end of it,” said Gbite Adeniji, a lawyer who helped design the programme as a technical adviser at Nigeria's ministry of petroleum, adding that roughly $3bn is needed to commercialise the remaining flares, with site costs ranging from $20m-$100m.

The sources, who did not want to be named due to the sensitivity of the matter, said many bidders have already pulled out as many were unlikely to recoup their costs.

Only 48 of the nearly 180 sites still flaring in Nigeria are on the DPR list, many of them are not commercially viable and some of the best are missing, they added.

“The pool was three times smaller than they thought,” one source said of the sites.

Gas output at some, where oil fields are in decline, is likely to end within 5-10 years and others are offshore, making the required infrastructure more costly, the sources added.

The DPR did not respond to a request for comment on how it selected the flare sites, when it will announce winners or whether it was committed to the auction process.

Two bidders told Reuters they dropped out early in 2020 as delays made them question Nigeria's commitment.

Oneal Lajuwomi, CEO of Wavelength, said his energy company spent $20,000, but decided it was not worth putting in more cash, deterred by what he said was poor data, including on the gas produced and how long it would last.

“How do you determine the economic viability of the project if you don't know these things? The issue for us and a lot of people was a lack of trust,” Lajuwomi said.

Delays hurt bidders, who must revise the timeline with their financial backers and sometimes make costly revisions to feasibility studies to stay in contention.

One bidder still in the process and another source close to it said that the DPR's silence had spooked some funders who have been deterred by the unpredictable timeline and have less cash available due to the coronavirus pandemic.

The sources said that the DPR and the minister of petroleum had used their legal power to grant “exemptions” to sites, which can keep them from being auctioned.

Neither the DPR nor the ministry of petroleum responded to several requests for comment on this.

The World Bank said that it was not involved in the bidding or selection of flare sites, adding that Nigeria, along with Ecuador, Egypt, Mexico, Indonesia and Iraq, had made progress.

However, observers said Nigeria's troubled power sector, combined with the location and size of some sites, made it almost impossible for an investor to make money selling gas to it, despite electricity tariffs that were roughly doubled.

“It's going to get harder and harder to totally eliminate the flares, because many of them are quite small,” Gail Anderson, upstream research director at Wood Mackenzie, said, adding: “Many of these are in sort of remote locations.”

“The problem is being able to effectively find a reliable demand source,” Stefanou said.

And even as state oil company NNPC and the Ministry of Petroleum announced plans to expand demand for fuels made from gas, such as liquefied petroleum gas (LPG), DPR and a national oil company subsidiary have also added fees to it.

Such issues make it tougher for those hoping to make money from flared gas to find buyers.

Back in Ughelli, a 6m-high wall of burning gas sends waves of heat over Root Ohoteka and four of her children. She uses the high temperature to dry cassava flakes, which she sells.

The intense heat speeds up the process, but she said she would rather find another way to feed her family as she is worried about the effects the fumes will have on their health.

If Africa's richest man succeeds, he could end the irony of the continent's biggest oil producer importing $7bn of fuel a year
World
1 year ago

The end of the West African CFA franc

The end of the West African CFA franc