There is no accountability, there are no rules and regulations promoting spacing and design, says Omar Degan 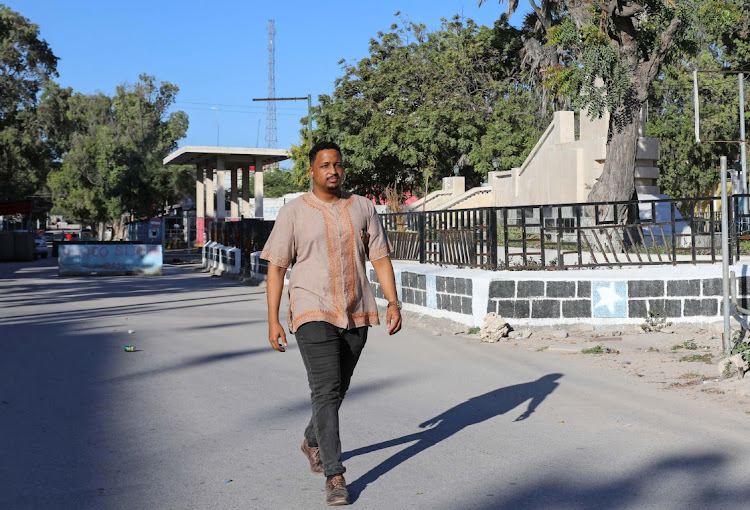 Omar Degan in front of the National Theatre in Mogadishu, Somalia, on August 28 2020. Picture: REUTERS/FEISAL OMAR

Mogadishu — Mogadishu is a city of ruined glory: crenellated towers crumble by the sea and sand whirls against the pockmarked archways of the roofless old cathedral. But one young man, returning to his family’s homeland, walks through the streets and dreams of their future.

Omar Degan was born in Italy to Somali parents who left three years before civil war broke out in 1991. He studied architecture in Italy and Hong Kong before returning to Mogadishu in 2017, part of an influx of young diaspora Somalis returning to rebuild their country.

“I feel extremely sad and angry when I see Mogadishu the way it is now,” he said, walking through streets scarred by fighting and choked with rubbish. “It used to be the most beautiful city in Africa.”

The population has swelled since Islamist al-Shabaab insurgents pulled out of the city nine years ago, leaving it to AU peacekeepers and Somali security forces. But Degan worries a building boom is taking place with little regard for civic life. Right now, the only public space in the city is the sugar-white sandy beaches.

“There is no accountability, there are no rules and regulations promoting spacing and design. No public parks, not enough public space,” he said.

The government is trying: it reopened the National Theatre and the National Museum in July, but repeated insurgent attacks mean citizens cannot just wander in and out: security has to be tight. Al-Shabaab still mounts attacks in the city almost daily.

Degan wants the government to set aside some of the city’s rapidly vanishing land for public spaces where families can gather in the evening. He had found powerful allies: the former mayor of Mogadishu, and the prime minister. But a suicide bomber killed the mayor a year ago and the prime minister was fired after a vote of no confidence.

For now, Degan is concentrating on smaller projects, some of which he does pro bono. He’s designed a school with gardens in central Somalia, and a public library in the town of Las Anod.

In Mogadishu, the cool white walls of the Salsabil restaurant he designed are adorned with pictures showcasing old Somali houses and men in the traditional mawais, a length of cloth wrapped around the waist.

“Public space, especially in a post conflict reconstruction context, it means a lot because it really helps the people take ownership,” Degan said. “Having a public space, will help the reconciliation and the peace that Somalia needs and is looking for.”

With investigations ongoing in several countries, the extent of the plunder could amount to hundreds of millions of dollars
World
1 year ago