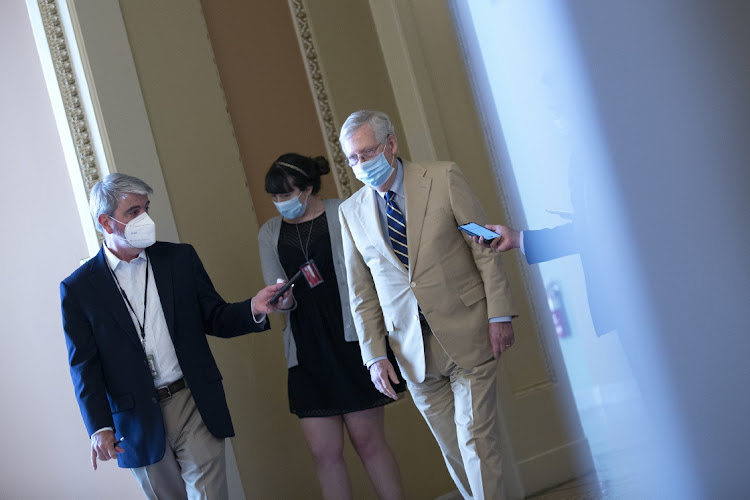 Senate majority leader Mitch McConnell walks to his office at the US Capitol in Washington DC, the US, July 20 2020. Picture: STEFANI REYNOLDS/BLOOMBERG

Washington  — President Donald Trump and congressional Republicans on Monday said they were working on a $1-trillion coronavirus relief bill focused on businesses, schools and health care, while Democrats vowed to oppose any proposal developed without bipartisan talks.

In a meeting at the White House, Republican legislators and administration officials said they were making progress towards a fresh round of legislation aimed at cushioning the heavy economic toll of the pandemic.

"Senate Republicans will put forward our proposal soon, I hope our Democratic colleagues will be ready to work together," said senate majority leader Mitch McConnell, adding that he hoped to unveil the proposal this week.

The Republican-controlled Senate and Democratic-led House of Representatives have less than two weeks to hammer out a new relief package before enhanced unemployment benefits run out for tens of millions of American workers made jobless by the Covid-19 pandemic.

House Republican leader Kevin McCarthy on Monday said the Republican proposal would include a cut to the payroll tax on workers' gross earnings, which funds national retirement programmes. Trump favours such a cut as an economic stimulus, but the idea has stirred little enthusiasm on Capitol Hill, with legislators worried about protecting the Social Security payments funded by payroll taxes.

"We're working and negotiating with the Democrats and trying to get a plan that helps small business, helps people, helps this country," Trump said.

But McConnell has yet to engage in bipartisan negotiations, a senate Democratic aide said.

Senate Democratic leader Chuck Schumer warned that his party was prepared to stymie any Republican effort to pass partisan legislation. "A bipartisan, bicameral process will result in a much better bill for the American people," he said in a letter to colleagues.

Congress has so far committed $3-trillion to the crisis. In the more than 12 weeks since Trump signed the last bill into law, the number of US coronavirus cases has more than tripled to more than 3.7-million.

McConnell said recent spikes in new cases "show that we are nowhere near out of the woods".

Treasury secretary Steven Mnuchin, who led previous coronavirus bill negotiations with Congress, said on Monday that he intended to "focus on starting with another trillion dollars. We think that will have a big impact."

But Democrats have pledged to fight for legislation akin to the $3-trillion bill that the House approved in mid-May, which provides hundreds of billions of dollars for state and local governments, extends enhanced unemployment insurance and provides new payments to individuals and families.

The prospect for new legislation was upstaged over the weekend by White House efforts to eliminate billion of dollars of money intended for testing for the virus. Word of the move has sparked anger among Democrats and Republicans alike.

"Hopefully, it was a mistake and they'll back off it, because it is so very wrong," House speaker Nancy Pelosi said.

Republicans scale back convention as Covid infections rise in Florida