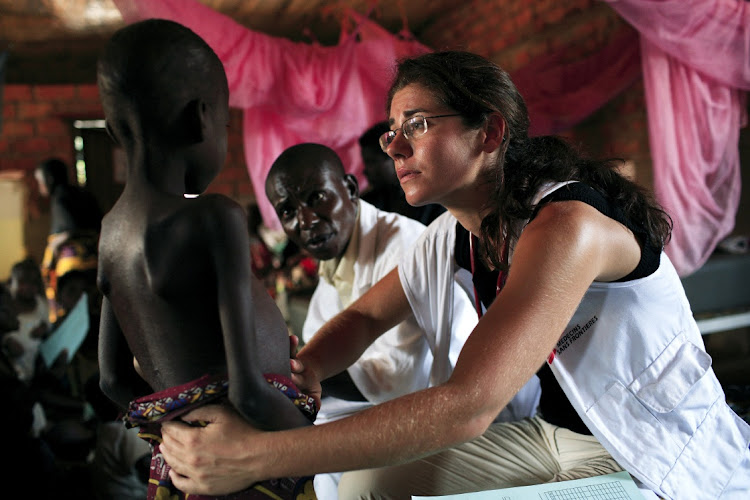 A German medical doctor, checks on a sick patient in Dubie, Katanga Province in the Democratic Republic of the Congo in this file photo. Picture: GETTY IMAGES/PER-ANDERS PETTERSSON

Children in the Democratic Republic of Congo haven’t been vaccinated against measles in 2020. Polio is making a comeback in Nigeria. In Cameroon, where malaria is rampant, a state-run programme switched to phone consultations after half of its staff was deployed to help Covid-19 patients. In Southern Africa, where millions live with tuberculosis and HIV, treatment centres have been converted into Covid-19 wards.

A quiet and deadly health catastrophe is brewing in Africa. Not from the coronavirus, but from age-old diseases that have overnight taken a back seat to the pandemic. As scarce resources are diverted to cap Covid-19 cases and the fear of infection deters people from visiting medical facilities, diseases that health organisations have been trying for decades to eradicate — from malaria to yellow fever and HIV to tuberculosis — are set to surge.

“We are deeply concerned about the potential impact on HIV, TB and malaria,” said Peter Sands, head of the Global Fund to Fight Aids, Tuberculosis and Malaria, which spends more than $4bn a year in over 100 countries. “The indirect cost in terms of lives could be greater than the direct cost from Covid.”

Africa, which has less than 1% of the world’s financial resources, carries more than 22% of the global disease burden, according to the World Health Organisation. Even before the coronavirus pandemic struck, about one-million people died every year across the continent from malaria and tuberculosis alone.

Africa has done relatively well in keeping the march of the coronavirus in check. Most African nations responded quickly, imposing lockdowns to allow their health systems to prepare for the outbreak.

In the west and centre, health experts were well aware of the dangers of a pandemic after dealing with the Ebola virus that’s killed more than 13,000 people from Sierra Leone to Congo in the past decade. Nigeria built isolation wards in stadiums; in Ghana, residents of the biggest cities were immediately confined to their homes.

The number of deaths recorded in Africa since the first person tested positive in February remains low, at just over 4,228 — tiny set against the almost 375,000 global fatalities.

As with the rest of the world, the pandemic has had a huge economic effect in Africa. According to the World Bank, Sub-Saharan Africa will suffer its first recession in 25 years after economies were brought to a halt and global trade was disrupted.

But the human cost is becoming evident as African nations are forced to divert health workers and supplies away from a range of other diseases.

In SA, which has the world’s largest HIV epidemic and 300,000 people with tuberculosis, fear of the coronavirus has emptied hospitals. Although clinics remain open, the number tested for TB has dropped by half, and HIV testing is down a quarter since the national lockdown began on March 27, said Francois Venter, the deputy director of the Wits Reproductive Health and HIV Institute in Johannesburg.

“People’s health-seeking behaviour has changed; they are scared of Covid-19, quarantine,” he said. “There is a devastation of programmes. It’s an absolute catastrophe. We are going see a wave of secondary diseases, fatalities and morbidity.”

Regular health services are being affected, too. Zambia, for instance, reconfigured its main TB centre to fight Covid-19, using staff from one of its biggest hospitals. All elective surgeries were suspended, pharmacies are running out of stock and the number of people coming for treatment of other ailments has dropped sharply, said Naeem Dalal, a doctor in Lusaka.

“A lot of people haven’t been able to work and don’t have the money to come to the hospital,” said Dalal. “In normal times, in my department, we are four doctors and see 60-100 people per week. That number has dropped to between 20 and 30. The question is: where do these people go when they are unwell?”

Travel restrictions mean that awareness and treatment campaigns have been halted in some countries and vaccination drives postponed in others.

Vaccination campaigns that would have prevented some 21 million children from getting measles were cancelled in five African countries, including some of the world’s poorest — the Democratic Republic of Congo, Central African Republic and South Sudan.

Another 11 countries have postponed preventive measles campaigns while authorities in South Sudan, Ethiopia and Uganda are afraid of conducting mass vaccination campaigns against yellow fever while the coronavirus is spreading, according to Richard Mihigo, who runs the immunisation and vaccines programme for the WHO at its Africa regional office in Brazzaville, the Republic of Congo.

“Modelling data shows there will be an upsurge in measles outbreaks if vaccination is not resumed,” Mihigo said. “There is a serious risk of rolling back progress. There will be life after Covid-19, and we don’t want to see ourselves in the position where other health issues are unmanageable.”

Polio was almost on the verge of being eradicated, with the wild polio virus last seen in Nigeria more than three years ago. Cases have now emerged of so-called vaccine derived polio, where the attenuated virus can occasionally mutate and spread, causing paralysis, Mihigo said. Normally, widespread vaccination keeps it in check.

“We will lose all the achievements in communicable diseases we have had since 2010,” said Lucica Ditiu, director of Stop TB, an organisation that’s trying to eliminate the disease worldwide. “When you are climbing Everest, this is an avalanche that puts you back to the start of the mountain.”

Vaccine developers face poser in countries where pandemic is waning