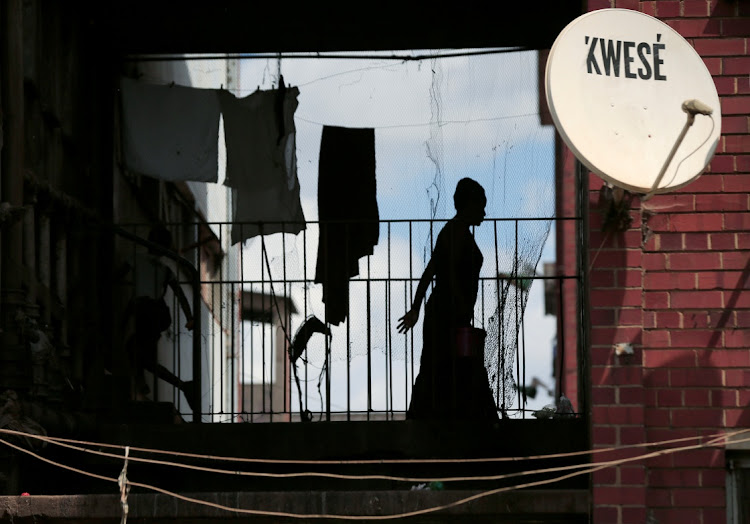 A woman is seen behind washing at an apartment block during the 21-day nationwide lockdown aimed at limiting the spread of coronavirus in Harare, Zimbabwe, on April 6, 2020. Picture: REUTERS/PHILIMON BULAWAYO

Harare — Zimbabwe will allow citizens to access remittances from the diaspora and permit farmers to take their produce to the market, easing a three-week coronavirus lockdown that analysts fear could push the struggling economy to the brink of collapse.

Many citizens in Zimbabwe, which has recorded one death from nine coronavirus cases, rely on money from relatives in the diaspora, but the lockdown led to the closure of a major source of income for many desperate Zimbabweans.

Zimbabwe, which faces its worst economic crisis in a decade, marked by soaring inflation, shortages of foreign currency, food and electricity, earned $635m from diaspora remittances in 2019.

Central bank governor John Mangudya said in a statement on Monday that money transfer agencies would be allowed to open three times a week from Tuesday but banks are to remain closed for any other transaction. The decision is meant “to allow for the receipt of foreign currency remittances which cannot be transacted on any digital platform”.

President Emmerson Mnangagwa, who ordered the lockdown that started on March 30, said separately that farmers would be allowed to sell their produce at the markets from Tuesday. Farmers had complained that their produce was rotting, leaving them without a source of income while shops were running out of fresh vegetables.

The easing of the lockdown shows the limitations that most African governments face as they seek to balance the need to stop the spread of the coronavirus with keeping the wheels of the economy turning.

Nigeria to borrow $6.9bn in battle to contain coronavirus

In countries such as SA, the burden of support has fallen on the central bank because the government lacks the resources to provide stimulus
World
1 year ago

Meagre economic support measures will largely bypass the sector, which provides most jobs
World
1 year ago
Next Article