Meagre economic support measures will largely bypass the sector, which provides most jobs 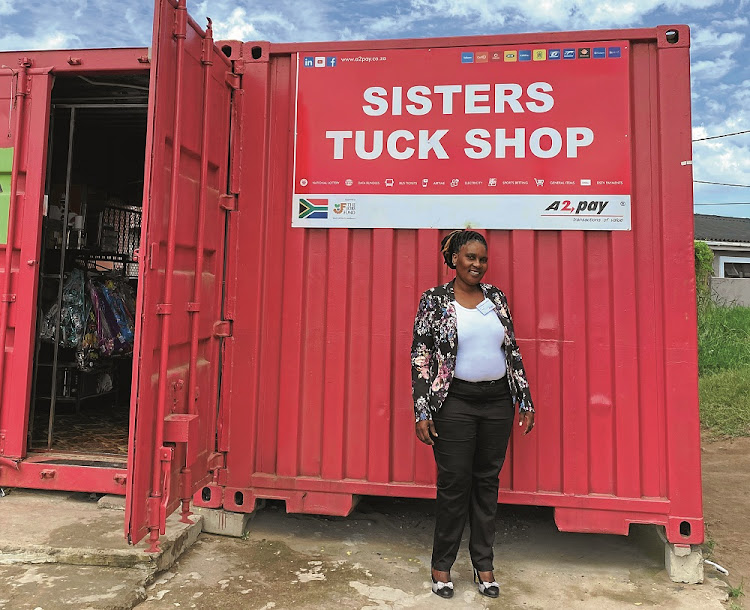 Sisters are doing it for their neighbours: Ntombizonke Mkhize outside her shop. Picture: Supplied

Lagos — In a dark, ground-floor room in Lagos, dressmaker Kemi Adepoju gazes at a pile of dresses she has made but that cannot be collected due to the lockdown in force to slow the spread of the coronavirus.

“This lockdown came upon us suddenly. I used all my money to buy fabric. If I had known, I would have ... used it to buy food instead,” said the mother-of-two, who runs her business from a room she rents in the Iwaya suburb of Nigeria’s largest city.

Like millions in Africa, Adepoju works in the informal sector, which accounts for more than 85% of employment across the continent and will be largely bypassed by meagre economic support measures that cash-strapped governments are rolling out.

The IMF said in a blog on the outbreak’s impact on Africa in March that “social distancing” was not realistic for the most vulnerable and the notion of working from home was only possible for the few.

“The very measures that are crucial to slowing the spread of the virus will have a direct cost on local economies,” it said. “The disruption to people’s daily lives means less paid work, less income, less spending and fewer jobs.”

Lockdowns, initially expected to last 14 days, began in Lagos and the capital, Abuja, on March 30.

The government of Africa’s most populous country has announced a repayment moratorium for government loans made to small businesses ranging from market traders to farmers, and has said it will offer similar relief to large companies.

Muda Yusuf, director-general of the Lagos Chamber of Commerce, said the self-employed in cities will not benefit from these measures because they are aimed mainly at rural areas and no relief has been offered on commercial loan repayments. “These measures are not likely to trickle down to people in the informal sector,” he said.

The government says it has begun making cash transfers to the country’s poorest households, but many hawkers and other informal traders do not have bank or mobile money accounts to pay into even if they were eligible.

About 60% of Nigerians lack a bank account, according to the World Bank.

There is a danger that government support will not reach those who need it most, said Tunde Ajileye, a partner at risk consultancy SBM Intelligence. “Until people can be found and tracked centrally and matched to their financial records, operations like these will at best be informed guesswork and fraught with corruption,” he said.

The coronavirus crisis has piled more pressure on the Nigerian government’s finances while it was already struggling with a slump in the price of oil, the mainstay of the economy.

Even SA, the continent’s most developed economy, has been unable to promise an enormous fiscal stimulus to cushion the coronavirus blow, with the economy already in recession and unemployment hovering around 30%.

It has announced tax relief for small businesses worth R500 a month for each worker for four months and will permit businesses with revenue of R50m or less to delay paying 20% of their employee tax liabilities over four months.

But no support has been offered so far to the informal economy, which provides employment to 25%-30% of SA workers, according to the World Bank.

For many, all they can do is hunker down for the 21-day national lockdown to end and hope business will pick up again.

“I work in a public space, which puts me at risk,” said Natasha Mbayo, a hairdresser in Johannesburg’s inner city. “Once everything is fine, I can get back to earning money.”

Others are defying the lockdown to survive.

“I know I am not supposed to be sitting here selling, but I don’t have a choice,” said Lucy Malimele, who was selling spinach at a quieter-than-usual market in Soweto one day last week. “If I didn’t come, I would not have had money for these two loaves of bread.”

Malimele has sold fruit and vegetables at the Kliptown market since 1983, relying on the trade to feed her family, including eight grandchildren.

“These kids don’t have parents, but I can’t just leave them. I have to make a plan to feed them,” said Malimele, who on a good day before the lockdown could earn up to R300. “I can’t tell whether the government is wrong or right to do this, but it seems like only those who have money will survive.”

Minutes later, police and soldiers arrived at the market and gave vendors five minutes to disperse or face arrest. Malimele stuffed her spinach into a large canvas bag and dragged it away.

CLAIRE BISSEKER: What path will SA choose once the lockdown ends?

BUSI MAVUSO: Kick-starting the economy is an urgent but delicate matter

JONNY STEINBERG: The burden on the poor will test their ‘patriotism’

CLAIRE BISSEKER: What path will SA choose once the lockdown ends?

BUSI MAVUSO: Kick-starting the economy is an urgent but delicate matter

JONNY STEINBERG: The burden on the poor will test their ‘patriotism’