Bata gives ‘Made in Nigeria’ shoemakers quite a kick

A new Bata factory in the country can produce more than 500,000 shoes annually and employs about 120 people 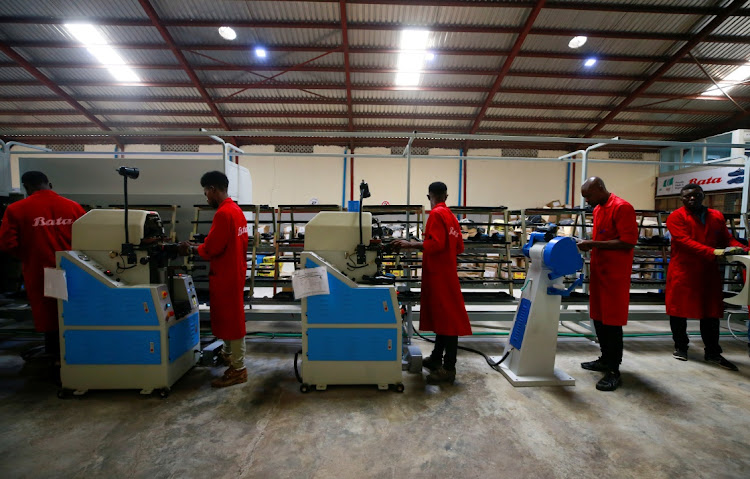 The production line could be anywhere in the world, but Bertram Dozie, the CEO of the newly opened Bata Nigeria shoes plant, hopes this Abuja facility heralds a renaissance for Nigerian-made shoes.

Bata Nigeria is a franchise tied to Bata, a historic shoe company based in Switzerland, and present in 70 countries. The Nigeria franchise has stores in the capital, Abuja, the southwestern mega-city Lagos and southern oil city Port Harcourt.

Bata Nigeria also sells shoes directly to Nigerian schools for pupils as part of their uniform, and stocks other stores in the country. Nigeria’s government hopes companies such as Bata can spur the local manufacturing sector, create jobs and reduce Africa’s biggest economy’s reliance on oil sales.

It has tried to stimulate this with its long-running “Made in Nigeria” agenda, which included placing import restrictions on shoes in 2007.

The shift to locally made goods is slowly taking effect. In 2010, Nigeria imported $180m worth of footwear. By 2018 this figure had fallen to $100m, mostly from China.

Dozie, surrounded by shoes in one of the company’s showrooms, described the market opportunities for locally made, mass-produced shoes in Africa’s most populous nation of 200-million people as “glaring”.

Bata, once a household name in Nigeria, closed its factory in the country about 20 years ago. Brand recognition has helped its return. It sells everything from strappy heels and protective work boots for adults to black leather school shoes. Prices range from 34,000 naira ($111) for leather boots to just under 6,000 naira for plain, casual shoes for children.

Dozie remembers wearing the shoes as a child as part of his school uniform.

Bata was founded 126 years ago in what is now the Czech Republic. A local company began marketing Bata in Nigeria in the 1930s, and manufacturing the shoes in the West African country in the 1960s. Reuters archive footage from 1971 shows a Polish delegation touring a thriving Bata shoe plant in Lagos.

But Dozie is not alone in hoping that the “Made in Nigeria” label will become a source of pride for consumers.

Tokunbo Onagoruwa, CEO of Lagos-based shoemaker City Cobbler said attitudes have also shifted. “When I started, I wasn’t putting my label on the shoes. I didn’t want people to know they were made in Nigeria,” Onagoruwa said, adding “now people wear ‘Made in Nigeria’ with all pride.”

It helps, she added, that a good quality locally-made shoe costs about £35 ($45), compared with £150 for a high-quality import.

Dozie said, “Our citizens are working for themselves and producing these shoes, so people enjoy that story.”

SA comes in second to Nigeria as Africa’s largest economy

Nigeria’s economy expanded the most in four years in 2019, while SA’s slumped into a second recession
National
1 year ago

Uber may gain from Nigerian ban on bike taxis

Nigeria is spurring on the rest of the continent, as Interswitch attained unicorn status in November
World
1 year ago

Nigerian lenders in drive to add female entrepreneurs as customers

Nigeria hopes to cash in on West African gold rush

Nigeria hopes to cash in on West African gold rush