Guillaume Soro, the man who would be Ivory Coast’s King

Young-ish, a former rebel and prime minister, Soro is a divisive figure, but seems likely to lead the country again eventually 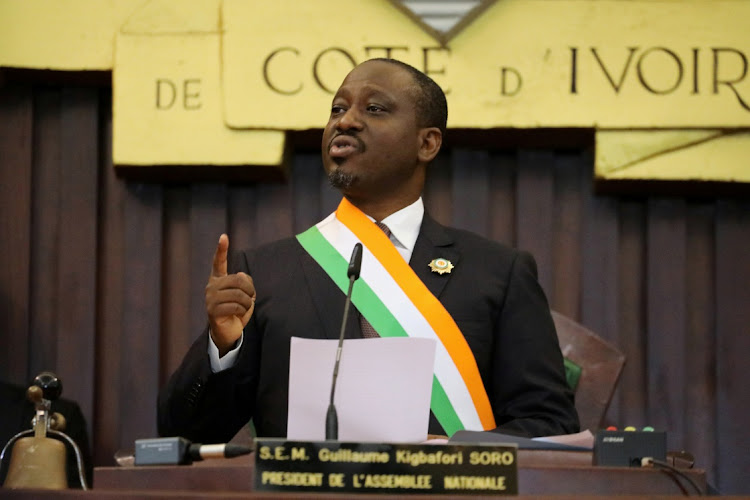 His loyalties have zigzagged over the years, from being a supporter of Laurent Gbagbo, the man who led Ivory Coast into a civil war, to backing Alassane Ouattara, who defeated Gbagbo in elections and recently accused Soro of trying to overthrow him. Soro calls the allegations “pure fiction” in an e-mailed response to questions.

Through it all, Soro has never been shy about his desire to run French-speaking West Africa’s biggest economy. Last week in Paris, he announced he’s planning to return to contest presidential elections in October. But there’s a catch: he faces an arrest warrant on charges related to the alleged coup attempt. That’s heightened concern he might try to stoke unrest as the vote approaches.

“The reality is that they want to exclude me,” Soro said. “I won’t accept it. I’ll organise myself so that I can be in Ivory Coast and submit my political project to the voters.”

Soro is a divisive figure. Even though he’s publicly asked for forgiveness for his role in a decade-long conflict that split the country into a rebel-held north and a government-run south, many Ivorians blame him for the crisis that killed thousands and destroyed the livelihoods of many others.

As the youngest major politician (47) in a country dominated by men well into their 70s, his social-media savvy and penchant for bling resonate with a new generation of voters. Last year he asked his 963,000 followers on Twitter to write a slogan and come up with a theme song for his fledgling political party.

While Ouattara has overseen consistent annual economic growth of more than 7% since 2012 and transformed the main city, Abidjan, into a bustling metropolis that’s attracting companies from Morocco to China, he’s a taciturn 78-year-old technocrat. The main opposition leader, Henri Konan Bedie, turns 86 in May.

“Soro is somewhat of an enigma in Ivorian politics; he has allied himself with many of the major actors over the years and he is extremely ambitious,” said Kobi Annan, an analyst at risk consultancy Songhai Advisory in neighboring Accra, Ghana. “His age is very much in his favour.”

As a 33-year-old rebel leader controlling northern Ivory Coast, few took him seriously in 2005 when he received visitors sitting on a red Louis XVI chair at his shabby headquarters and declared himself prime minister. Yet just two years later, he reached his goal by making a pact with then president Gbagbo, who he had previously tried to oust.

Then, in 2010, he dropped Gbagbo, whose refusal to accept his defeat in elections sparked a violent six-month standoff, and deployed his rebel force alongside French and UN aircraft to help Ouattara assume the presidency.

The war on cocoa

That conflict — the country’s bloodiest — paralysed cocoa exports for months and sent prices for the commodity soaring. Ivory Coast grows about 40% of the world’s cocoa.

While a role as power broker in recent years appeared to set Soro on course for a high office, he suffered a fall from grace after the allegations emerged of a coup plan.

“We could indeed ask legitimate questions about the period and the context chosen by the justice system to institute proceedings against Soro,” said Sylvain N’Guessan, a political analyst in Abidjan.

Commenting publicly on the issue for the first time this week, Ouattara told party loyalists “there’s no doubt” that a coup was being planned. He declined to elaborate, saying the case was in the hands of the prosecutor.

Soro quit the ruling coalition last year and resigned as speaker of parliament, a post he’d held since 2012. The rift was caused by Ouattara’s decision to groom Prime Minister Amadou Gon Coulibaly as his likely successor — if he chooses not to seek a third term, which is now allowed by a 2016 change to the constitution.

“The problem is that he’s still too much of a rebel and not enough of a polished politician,” Annan said. “Ouattara believes in Soro’s potential, but he’s worried that he’s a little bit unpredictable, and that, in an election year, is dangerous.”

In 2018, the discovery of a cache of weapons in a house owned by Soro’s head of protocol was seen as evidence that he had backed a series of mutinies in the army, where he still has substantial support from his days as a rebel leader.

Two years before that, UN investigators said he’d acquired about 300 tonnes of weapons and ammunition, an accusation he denied. The prosecutor of neighbouring Burkina Faso also sought Soro’s arrest over his alleged role in a short-lived coup against the then-interim government. The charges were later dropped.

“Will he be president one day? I very much believe so,” Annan said. “He still needs to work towards gaining political and popular capital and that cannot be done from outside the country. The arrest warrant has effectively put paid to any ambition he had of being able to mount a viable challenge in the October elections.”

Former rebel leader to run for president in Ivory Coast

Former rebel leader to run for president in Ivory Coast