While it is impossible to put a value on the goods runners move across Africa as they avoid duties and taxes, they are organised and efficient, and even have a website and app 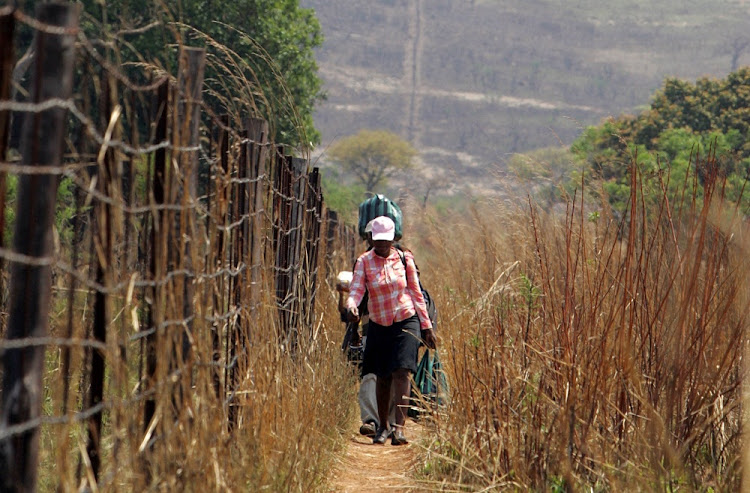 People walk along the fence marking the SA's border with Mozambique. Picture: SOWETAN

Harare — Farai Mapondera sits at a Shell filling station about 500m from the Beitbridge border post that separates SA and Zimbabwe. It’s 3pm and 40°C so he’s slouched against his battered Mercedes-Benz Sprinter van, waiting for the sun to set before he tackles a crossing plagued by delays, corruption and chaos.

Beitbridge is one of Africa’s busiest land border crossings. About 25,000 people and 500 heavy trucks cross every 24 hours and, in summer, the temperatures are searing. Mapondera is a runner, or malaicha, a slang term meaning “deliverer of goods”. Twice a week he transports items between Johannesburg and Zimbabwe’s capital, Harare.

But delays at the border and breakdowns can reduce his trips to as few as three a month. If it’ll fit in his van or on the overloaded trailer he tows, he’ll take it. The trailer towers over the Sprinter and it looks precariously balanced, tied down with bits of rope and netting. The 1,200km journey takes him about 24 hours — if he’s lucky.

“If there are delays you can spend a whole 24 hours trying to cross” the border, Mapondera said. “The roads in Zimbabwe are terrible, so punctures are common, also breakdowns, so sometimes it can take much longer.”

The malaicha exist because Zimbabwe’s economic crisis has destroyed much of the normal infrastructure of trade and foreign currency is scarce. That, and a drought, have made it even more difficult to acquire basic consumer goods.

While it’s impossible to put a value on the goods runners move across Africa because they avoid duties and taxes, they are organised and efficient. They even have a website and an app. They’re used by rich and poor to bring in goods at the lowest possible price and will deliver to your door anything from a freezer to a mobile phone — and even an envelope stuffed with cash.

Parked next to Mapondera, Josiah Banda is underneath an old Iveco van, tying the exhaust to the chassis with wire. He’s on his way to Blantyre, Malawi’s economic capital that’s another 1,200km northeast, and he faces two more border crossings.

“It’s hard to say who are worse,” Banda says, rubbing his soot-covered hands on his trousers. “SA immigration can make you move from one queue to another for no reason. They’re very rude.”

Driving in Zimbabwe isn’t too bad, but once you hit Mozambique you’re expected to pay bribes at the border and to police along the road, he said.

“In Malawi, people complain that everything is expensive; well, this is why everything costs so much.”

Typically, runners taking goods to Zimbabwe charge between 25% and 30% of the value of the items as their fee. That’s considerably less than the import duties they’d normally have to pay, but there are ways to wiggle for profit.

The runners have arrangements with the bus drivers who cross the border and officials from the Zimbabwe Revenue Authority. Instead of declaring the goods themselves, they spread it between the 80 passengers on each bus and, with a $200 duty-free allowance per person, the runners end up paying very little.

A malaicha who says his name is John Madzibaba is heading for Chipinge, a small town on Zimbabwe’s frontier with Mozambique. His trailer is sagging under the weight of bags of cornmeal, plastic chairs and suitcases. He’s waiting for a shift change on the Zimbabwe side when “my customs guy will be on duty,” he said.

Madzibaba does between four and six trips a month, each turning over about R20,000. From that he must pay his loading assistant and bribes, buy fuel and maintain his vehicle, he said.

Border infrastructure in SA and Zimbabwe was built in a time when far fewer people and less freight crossed the Limpopo River between the two nations. The SA side is mainly orderly but slow, with lines of people waiting in the sun. The Zimbabwean side is frenzied, chaotic and without any obvious order, but can often be quicker.

Both sides maintain archaic police and vehicle checks, endless forms and waiting. Sometimes fights break out when someone jumps the line and tempers become frazzled in the heat and impatience with corruption.

It’s a far cry from the vision of leaders who signed the African Continental Free-Trade Agreement, aiming to lower or eliminate cross-border tariffs on most goods and ease the movement of capital and people across the whole continent.

Back at the Shell filling station, Mapondera affirms this.

“When politicians talk about African trade, they’re talking for the sake of talking,” he said, dismissing chances of governments ever agreeing to open borders. “What we do, we runners, is how most of Africa trades.”

China has such agreements with 20 countries, including SA, and hopes the move will improve trade with the embattled Zimbabwe
World
2 years ago