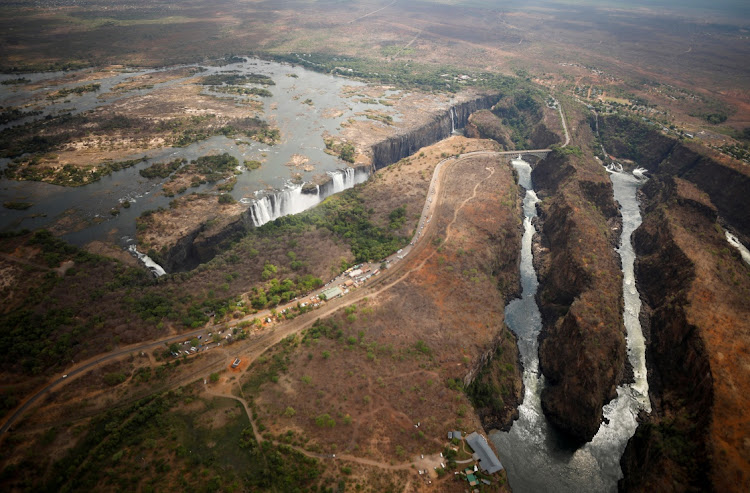 The Victoria Falls is seen from the air following a prolonged drought in Zimbabwe. IImage taken on December 5, 2019. Picture: MIKE HUTCHINGS/REUTERS

Maputo — Drought has plunged millions of Zambians and Zimbabweans into darkness as hydropower dams drain, and their governments’ debt is making matters worse.

Rolling electricity blackouts lasting 18 hours a day have choked the two economies. Ballooning debt has left them unable to afford to import enough power to help cushion shortages. Even if they could, the region’s biggest supplier, Eskom, doesn’t have enough capacity to keep the lights on in its home market.

The power crises in the three countries has worsened economic strain. Zimbabwe’s GDP is expected to shrink this year, Zambia is on course for the slowest expansion in more than two decades and SA is staring down a second recession in as many years.

The downward spiral has been years in the making, as cash-strapped electricity utilities failed to replace ageing plants and build new ones fast enough to keep up with demand, according to Kay Walsh, MD at Nova Economics in Stellenbosch. The drought has only magnified the problem, she said.

“Everything has come to a head at a very unfortunate time, but the problems had been brewing,” Walsh said. “They can’t actually afford to replace their capacity. It’s either a sharp increase in tariffs or it’s got to be funded by the taxpayer.”

Turbines at Kariba, the world’s biggest man-made reservoir, could be forced to shut completely after water levels dropped to the lowest level in 23 years, and continue to fall, a disastrous scenario for both economies.

Electricity prices will need to rise, Walsh said. That would add to inflation woes — Zimbabwe’s consumer prices surged an estimated 481% last month, and in Zambia price growth is at a three-year high.

Historically, the two countries have relied on cheap electricity from Kariba. As populations have grown and more people are connected to the grid, governments didn’t raise tariffs enough to afford to build new production capacity.

Borrowing more to pay for plants will be difficult. Zambia’s sovereign debt will reach 96% of GDP next year, while Zimbabwe cannot take on more debt until it settles its arrears with international lenders.

Zimbabwe more than tripled power tariffs in October and will need to act again, while Zambia has warned that an announcement on prices is imminent.

That Zambia “is in a debt-induced crisis implies that very few external, and some domestic, suppliers of electricity are willing to guarantee additional supply without onerous demands which Zambia is unlikely to satisfy”, said Grieve Chelwa, a senior economics lecturer at the University of Cape Town. “So the sum total of this has made the situation worse now than before.”

People including Brown Liamba, a 30-year-old who owns a printing shop in Lusaka, Zambia’s capital, would rather pay higher prices for electricity if it meant more reliable supply. It will still cost less than the fuel he has to buy to run a generator.

“If that’s the only option to sort out the load-shedding, and me running my business, I’d rather pay double,” he said, using a regional term for rolling blackouts.

Even with higher prices, the power deficits in Zambia and Zimbabwe won’t disappear overnight. It will take at least a few years for hydropower dams to recover. And small businesses like Liamba’s that account for the bulk of economic activity in the two nations will continue to struggle.

“The impact is going to be substantial,” Chelwa said. “Electricity, is the lifeblood of any economy.”

LETTER: Probe blackouts rather than infighting

Now Eskom wants you to pay for its mistakes

LETTER: Probe blackouts rather than infighting

Now Eskom wants you to pay for its mistakes