Investors in a bind over offloading Russian gold 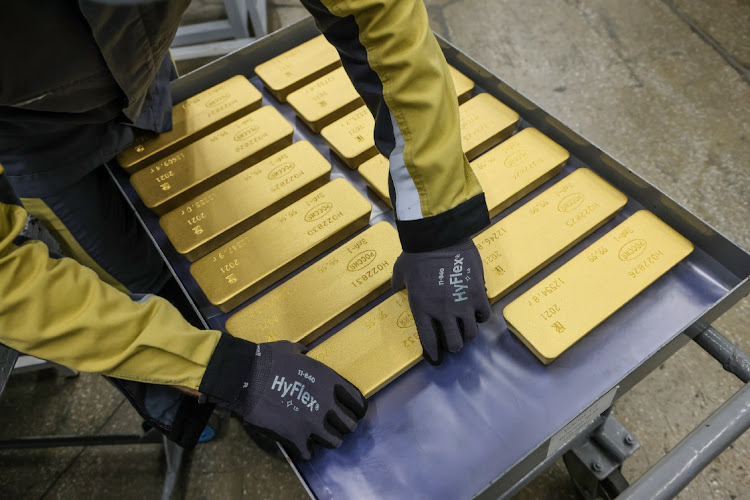 London — Some investors want Russian gold off their books but it's not that easy to remove.

A de facto ban on Russian bullion minted after Moscow's invasion of Ukraine — instigated by the London market in early March — does not apply to hundreds of tonnes of gold that has been sitting in commercial vaults since before the conflict started.

Fund managers looking to sell the metal to avoid the deepening reputational risk of holding assets linked to Russia in their portfolios could trigger a costly scramble to replace it with non-Russian gold, according to bankers and investors.

“This would only serve to damage investors. It doesn't damage the [Russian] regime,” said Christopher Mellor at Invesco, whose fund has about 265 tonnes of gold, 35 tonnes of it produced in Russia with a market value of about $2bn.

The dilemma facing investors reflects Russia's heft in the global bullion trade and its hub, the London market, where gold worth about $50bn changes hands daily in private deals.

A rapid sell-off of gold from Russia — a top three supplier — would potentially disrupt that trade by undermining the principle that all bars in the London trading system are interchangeable regardless of their origin, according to three senior bankers at major gold-trading banks.

To buttress the market, two of the bankers said they contacted clients and rival banks to tell them they will not dump Russian bullion minted before the war.

The bankers said they advised their customers and other traders that they should do the same. They declined to be named due to the confidential nature of the conversations.

I made an effort to call clients. I told them, if you demand that your Russian metal is swapped out, you'll create a problem for yourself. You don't want to create a scramble

“I made an effort to call clients. I told them, if you demand that your Russian metal is swapped out, you'll create a problem for yourself. You don't want to create a scramble,” one said.

He said his phone lit up with calls after the London Bullion Market Association (LBMA), a trade body that sets market standards, removed all Russian refineries from its accredited list on March 7, meaning their newly minted bars could no longer trade in London or on the Comex exchange in New York, the biggest gold futures trading venue.

“There was utter confusion. Funds were saying they didn't want any Russian bars in their holdings,” the banker said.

Russia invaded Ukraine on February 24 in what it has called a “special military operation” aimed at demilitarising Ukraine and rooting out dangerous nationalists. Kyiv and the West call this a baseless pretext for an aggressive land grab.

The Bank of England, which operates Britain's largest gold vault, said it considers Russian gold bars made before the conflict in Ukraine eligible to trade because they are still on the LBMA's accredited list, known as the good delivery list.

“As far as the Bank of England is concerned, any Russian refined gold produced after March 8 is not London good delivery. Any bars produced before that remain acceptable, and we told all our customers this was the case. That's just a point of fact, so we don't have any comment on this,” the Bank of England said in an emailed statement.

To hammer home the point that pre-invasion Russian gold was meant to be treated the same as gold from other places, some banks told clients for whom they stored gold that they would have to pay extra to offload Russian bullion because it would breach their existing contracts, the two bankers, a third banker and two gold-owning investment funds said.

The bankers' conversations with clients and rivals that have not previously been reported, highlight the role played by a handful of players in the London gold market, where trades occur in bilateral deals.

Twelve banks dominate trading in the London gold market and four of them — JPMorgan, HSBC , ICBC Standard Bank and UBS — operate vaults. Anyone trading bullion relies on their services, directly or indirectly, to settle trades.

JPMorgan, HSBC, ICBC Standard and UBS declined to comment when asked about how they handled investor requests to sell their holdings of Russian gold.

The LBMA — which is made up of gold refiners, traders and banks — is not a regulator, and relies on market participants to uphold its rules.

The large quantity of Russian gold in the London market and Russia's rapidly emerging pariah status in the wake of the Ukraine invasion however, put the banks in a difficult spot, according to lawyers and market experts.

The FCA, the British regulator responsible for overseeing the banks and traders in the London gold market, declined to comment.

A spokesperson for the LBMA said the association is “anecdotally” aware that some owners and traders of Russian gold have wanted to swap it out or not to deal with Russian gold in the future.

Asked what the LBMA thought of this, the spokesperson said that it “maintains a neutral stance provided the efficient operation of the market is unaffected”.

The spokesperson declined to comment on bankers' efforts to prevent a sell-off of Russian gold. He said that the LBMA “does not distinguish between different types of good delivery gold”.

The bankers' actions appear to have worked.

Good delivery gold bars minted in Russia before the invasion have not traded at a discount to the rest of the market, according to traders. Larger investors — including some exchange traded funds (ETFs) with Russian gold worth more than $1bn — do not appear to have sold up.

“Our ETFs are not able to get all Russian metals off their books at short notice,” said a spokesperson for Zürcher Kantonalbank.

“The potential losses would not be compatible with our fiduciary duty to our clients and its sale is now not possible due to the current situation.”

Zürcher Kantonalbank's current ETF stock of about 160 tonnes of gold comes mainly from Swiss refineries and the share of Russian gold is negligible, according to the spokesperson.

A widespread and rapid clear-out of Russian gold from investor portfolios could push its price down $1-$40 an ounce compared with non-Russian gold, people in the industry said.

At least $12bn worth of Russian gold is stored in vaults in London, New York and Zurich, according to a Reuters analysis of data from 11 large investment funds. The total amount is likely to be significantly larger but there are no publicly available figures to quantify it.

If Russian gold traded at a discount of $5 an ounce, the cost to funds of replacing $12bn worth of metal would be about $34m.

A Reuters analysis of investment data shows that the share of Russian gold in eight large ETFs actually rose to 7% on average in mid-July from 6.5% in mid-March.

Some gold market participants have pushed ahead with selling their Russian holdings but they have tended to have less to offload.

Britain's Royal Mint, for example, said it had Russian bars worth about $40m in its ETF and got rid of them by mid-March.

Others are trying to reduce their Russian holdings over time, asking the banks that store their gold to gradually cut their allocation or refusing to accept Russian gold bars in new deliveries.

Asset manager Abrdn said it has asked its bank to reduce its Russian holdings. In mid-March, Russian gold accounted for 10% of the about 45 tonnes held in its Aberdeen Standard ETF. By mid-July, that proportion had fallen to 9.8%.

Those seeking a faster exit, have been left in a bind.

“Everyone has the same problem. Everyone wants to solve it, no-one knows how,” said a source at a major investment fund.